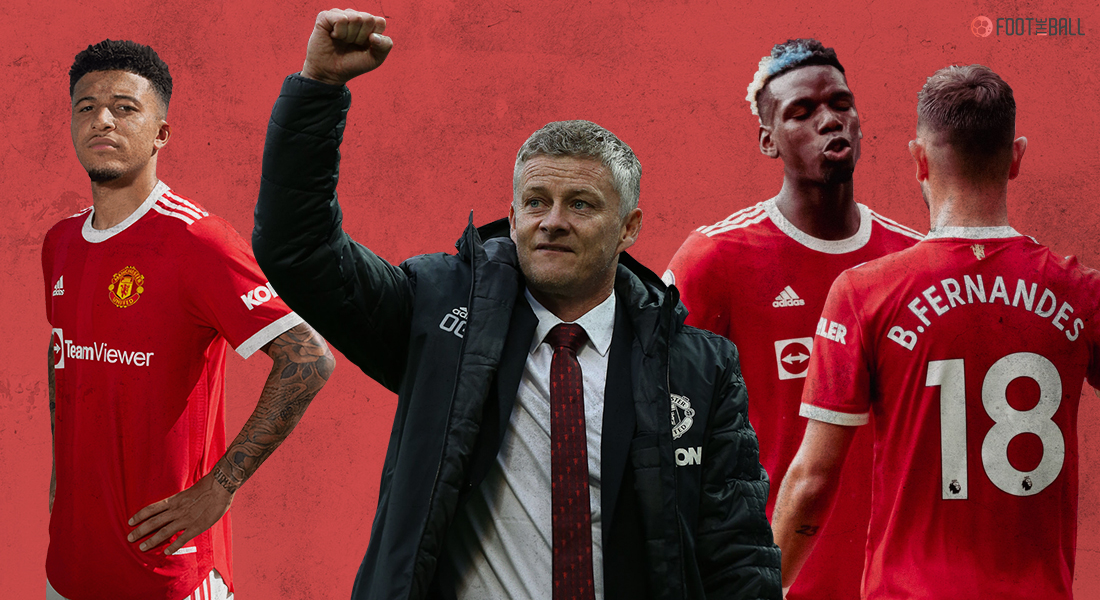 Manchester United are up and running in the new premier league season as they beat Leeds United 5-1. In the newest chapter of the battle of roses, the Red Devils asserted their dominance. In front of the returning vociferous Old Trafford crowd, they made a statement of intent to the rest of the league.

A hat-trick from Bruno Fernandes along with goals from Greenwood and Fred sealed a victory against Leeds United comfortably. Paul Pogba ran the show with four assists, while the Frenchman had 3 in total last season.

After a long gap of 17 years, Leeds United travelled to Old Trafford in the league. And also after a long gap of one and a half years, some 80 thousand fans returned to stadiums. The fans were in for a pleasant surprise before the kickoff as Raphael Varnane was finally presented as a Manchester United player.

The Frenchman however couldn’t make the bench unlike United’s other marquee signing Jadon Sancho. United fans got to Sancho for the first time as he came off the bench with 15 minutes remaining.

Manchester United’s lineup looked pretty much like the previous season’s. Despite claims of fielding an attacking lineup this season, injuries meant Ole had to stick with 4-2-3-1. Mason Greenwood was the only fit striker and naturally led the line. He was aided by three attacking midfielders in Bruno Fernandes as the 10 with Paul Pogba and Daniel James flanking him.

Leeds too deployed a similar lineup to the previous season. Marcelo Bielsa didn’t risk his Starman Kalvin Phillips as he used a tried and tested 4-1-4-1.

The game had an open nature right from the word go. As it went on, United took charge of the proceedings as Leeds were restricted to counter-attacks. The Elland Road outfit made a good account of themselves on the break and Rodrigo should’ve put them ahead midway through the first half.

Paul Pogba had the best chance for United when he raced through on goal with only Meslier to beat. The Frenchman however blasted it wide with his left foot. He compensated it with a world-class performance with four assists. Shortly afterwards it was the usual suspect Fernandes who broke the deadlock at the stroke of 30 minutes. Fernandes collected a lovely pass from Pogba and finished it sumptuously. United took the lead into halftime safely.

Marcelo Bielsa demanded changes in the second half as he handed a league debut to Junior Firpo signed from Barcelona. It was Luke Ayling who restored parity with a thunderous strike from outside the box. The game didn’t stay level for long as United opened floodgates with Pogba orchestrating the show.

The red devils scored three goals in eight minutes in a rapid-fire manner. Pogba released Mason Greenwood with an inch-perfect pass and the English international finished from a tight angle down the left. Pogba again played Bruno in for his brace two minutes later. Fernandes finished a sensational hat-trick on the hour mark as he made a strikers run to get on the end of Lindelof’s long pass.

Pogba then finished his hat-trick of assist as he pulled back for an onrushing Fred from the left flank for an easy finish. The French superstar reminded the Premier League of what he’s capable of. United were still hungry for goals but neither side troubled the scoreline after 5-1.

The fifth goal killed the contest as United decided to see it out. The sensational Pogba was subbed off for the new signing Jadon Sancho. Sancho made his debut under ideal conditions and enjoyed his time on the pitch. United score five without Rahsford and Cavani and make their title intentions clear again.

Bruno Fernandes is in a league of his own for the last two years. In his first full season in Manchester last time he registered double-digits goals as well as assists. Bruno still wasn’t satisfied as he didn’t lead them to tangible silverware. In the new campaign today, Bruno picked up where he left off last season.
Back in his favourite number 10 role, he created havoc. Sharp as ever he was finding little passes that constantly troubled Leeds defence. Bruno dropped deep into midfield a few times to pull the strings and also made runs beyond the striker at times.

10 – Bruno Fernandes' hat-trick is the 10th scored on the opening weekend in Premier League history, with Leeds the first club to concede two such trebles in the competition (also Mo Salah last season). Magic. #MUNLEE pic.twitter.com/GQRwGCUHWA

It was that kind of run that drew first blood for United. A poor clearance from Islan Meslier was collected by United and sent upfield to Pogba. The Frenchman played a perfectly lobbed first-time pass to Fernandes. The Portugues international took it down with his right foot and rounded Meslier and slotted it into the net with his left foot.

Bruno was on the end of a Paul Pogba pass again to double his tally for the day. A sublime through pass from Pobga was collected by Fernandes on the right-hand channel. When Meslier appeared to close him down he shuffled the ball behind and it looked like the chance was gone. But Bruno showed his awareness and got a shot past Meslier over the line. He made another striker’s run to finish his hattrick. The rest of the league must watch out for the red hot Fernandes.

THE DEVIL MUST STAY

Paul Pogba is a much-maligned figure for Manchester United. After a £100 million move to Old Trafford, he was always bashed by a few of the United faithful for underperforming. The scenario changes completely when Pogba pulls on a France kit.

Pogba was always tipped to move from England and go to a place where he’s valued more. It was reported that PSG were talking to Pogba who entered the final year of his contract in England.

If one ever doubted Pogba, they should just watch his performance for Manchester United against Leeds today. Pogba was simply dazzling on the field and had his usual suave back. Every pass he played oozed class and sent a reminder to his detractors. He missed a one v one early in the game but had the best possible one could ever have in a game.

Pogba released Bruno with a perfectly weighted pass for his first goal. He also made few crucial defensive interventions showcasing his work rate. Pogba found Greenwood with an incisive pass in the second half as United wrestled their lead back. A simple through pass saw him collect his third assist. Pogba darted down the left and pulled one back for Fred to complete four assists. Pogba left to a standing ovation from Old Trafford in the 75th minute.

This is the Pogba United fans were craving for. To put his performance into some perspective, he bettered his tally of 3 assists in the entirety of the last season in just 75 minutes today. If United fans get to see this Pogba week in, week out leading them to titles, they wouldn’t mind losing him for a free next year.

NOT THE BIELSA BURNOUT SURELY?

Leeds United had a fantastic first season back in Premier League last time. Today, they were anything but that. They looked jaded for most parts of the game. They weren’t pressing with the same intensity. Gaps weren’t closed quickly and it led to United’s first goal.

68' Goal Man United. Pogba picks out Fred in the box who slots home 5-1

The attack didn’t click at all as forwards Bamford, Harrison failed to string passes together. The highly-rated Raphinha missed a simple chance late in the game, to sum up, their evening.

Bielsa wouldn’t read too much into this game as they were also hammered 6-2 at Old Trafford last season. However, the fear of the Bielsa Burnout might be in the back of his head. Also, we have seen how Sheffield United have crumbled in their second season in the top flight after a highly impressive first one. Leeds must not fall into the same trap as Sheffield.