THE LEGEND’S LEGACY IN RECORDS 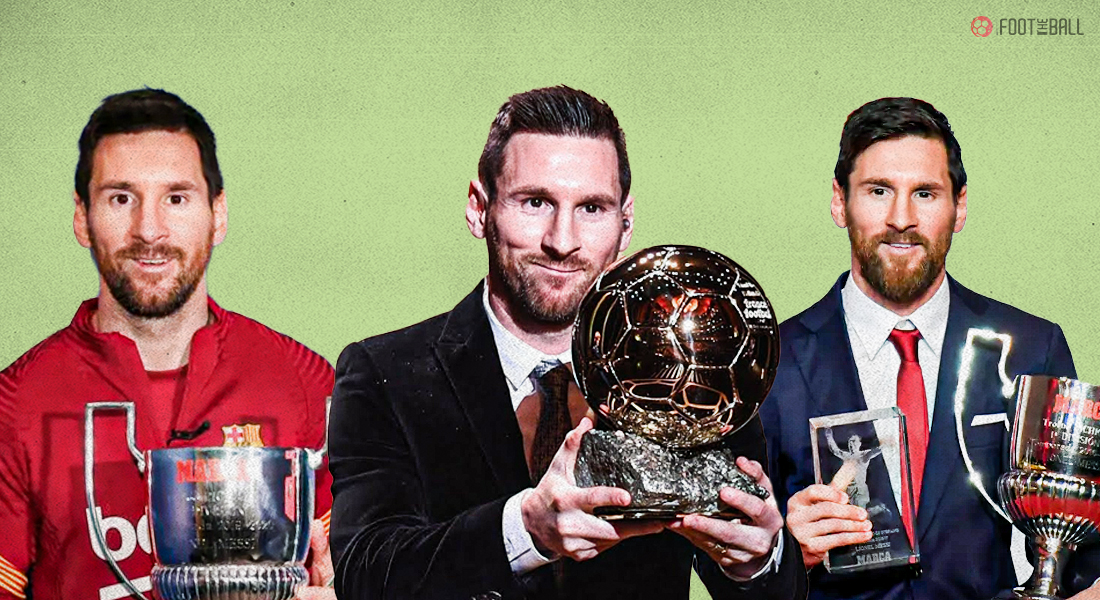 The heart and soul of Spanish giants FC Barcelona, Argentine forward Lionel Messi has finally parted ways with his boyhood club. A young kid from Rosario stunned the footballing world with his footballing heroics changing the fortunes of the Catalans. And although his time with the Catalans might come to an end, Lionel Messi smashed tons of records during his tenure at the club.

Managerial wizard Pep Guardiola once said, “The best is just one, the best is Messi.” Lionel Andres Messi will surely go down as one of the greatest footballers this generation has seen. Every team he has played against has always sung praises of him. While Lionel Messi bashing records week in and week out become normal for people, we at FootTheBall take a look at the records Messi has broken during his chronicle at the club.

Although the Greatest of All Time leaves after failing to reach an agreement with the club, the memories he leaves behind will be stored in the hearts of millions and billions of people who watched the Argentine weave his magic wearing the red and blue of Barcelona. From signing his first contract on a napkin to being Barcelona’s greatest, it’s time to revisit the records Messi broke in his glittering campaign at the Camp Nou.

PLAYER WITH THE MOST PICHICHI TROPHIES

Congratulations to Lionel Messi for winning the Pichichi trophy, his eighth in total. 🏆 pic.twitter.com/OntIggGUF3

TOP-SCORER IN THE SPANISH LEAGUE

The Argentine has netted 474 goals in 520 games for the Catalans.

Lionel Messi has scored 709 goals in 836 games, making him the top scorer in the history of football.

The talismanic striker has 672 goals in official competitions. He recently beat Pele’s record to reach the summit of the catalogue.

TOP-SCORER IN ANY EDITION OF THE LA LIGA

Lionel Messi thundered 50 goals in the 2011/12 campaign breaking Gerd Muller’s record scoring a half-century of goals in a single campaign.

TOP-SCORER AT HOME IN A SEASON IN OFFICIAL MATCHES

Messi broke another record in his jaw-dropping 2011/12 campaign. He scored 46 goals that season in official games played by Barcelona.

TOP-SCORER AT HOME IN A SEASON IN LA LIGA

The Argentine netted 35 goals at home in the 2011/12 campaign leaving the spectators at Camp Nou in awe of him.

TOP-SCORER AWAY FROM HOME IN A SEASON IN LA LIGA

In the summer of 2012/13, Lionel Messi proved why he could bully teams in their castle. Scoring 24 goals in away matches, Messi demolished outfits at their home.

MOST CONSECUTIVE AWAY LEAGUE MATCHES SCORED IN

In the 2012/13 season, Messi managed to score 24 goals playing away from home. All of these goals came in consecutive matches which were not played at Camp Nou. So in 15 consecutive away matches, the talismanic striker thundered 24 goals.

While finishing as a top-goal scorer or top-assist provider is a daunting task, Messi has ended a campaign as both thrice. The first came in his swashbuckling 2011/12 campaign, where he netted 50 goals and assisted 15 times( tied with Mesut Ozil). He repeated the feat in the 2017/18 campaign scoring 34 goals ( tied with his colleague Luis Suarez) and manufactured assists 12 times ( tied with Pablo Fornals). And just two seasons ago, he did it for the third time scoring 25 goals and delivering 21 assists.

TOP-SCORER IN ONE CAMPAIGN

MOST GAMES SCORED IN DURING A LEAGUE SEASON

17 – Lionel Messi 🇦🇷 is the player to have appeared the most seasons for Barcelona (17 level with Xavi Hernández & Carles Rexach), surpassing Andrés Iniesta, Sadurní & Migueli (16 for each one). Mystery#LionelMessi #leomessi #Barca pic.twitter.com/hoN4r0Jcio

FIRST TO SCORE IN AN ENTIRE ROUND IN THE LEAGUE SEASON

PLAYER WITH MOST HAT TRICKS

The Argentine has 41 hat tricks under his belt. Out of the 41, he has scored 31 hat-tricks in La Liga.

LEAGUE SEASON WITH ALL OPPONENTS SCORED AGAINST

Lionel Messi achieved this feat in the 2012/13 campaign when he struck at least once against every team in Spain.

PLAYER WHO HAS SCORED AGAINST MOST TEAMS IN LA LIGA.

Lionel Messi has smashed a goal against 38 different outfits in La Liga. The record was previously held by Raul Gonzalez and Aritz Aduriz ( both had scored against 35 teams).

He has scored from 38 direct free-kicks in the league.

PLAYER WITH MOST WINS IN OFFICIAL COMPETITION

Lionel Messi has emerged victorious on 542 occasions. Xavi is second with 476 victories.

PLAYER TO HAVE PLAYED THE MOST EL-CLASSICOS

Lionel Messi has played against Los Blancos for a record 45 times. Donning the Blaugrana jersey, the Argentine has contested against his Spanish rivals 29 times in the league, 8 times in the Copa del Rey, 2 times in the Champions League and 6 times in the Spanish Super Cup.

PLAYER WITH MOST EL CLASICO GOALS

Lionel Messi turns into a beast when playing against Los Blancos. The veteran has 26 goals against Real Madrid (18 in LaLiga, 2 in the Champions League and 6 in the Spanish Super Cup)

Most braces scored in La Liga: 116

Most La Liga appearances by a foreign player: 520 matches

The first player to score in 15, 16 and 17 consecutive seasons

The only player to score 30+ goals in 7 different seasons

Messi scored his 450th La Liga goal as Barcelona were held by Valencia on Saturday 🍿 pic.twitter.com/cx3ScVTObX

Most La Liga titles won by a non-Spanish individual: 10 (all with Barcelona)

Most dribbles completed in a La Liga match: 15, against Real Betis in 2007.

Most dribbles completed in a Copa Del Rey match: 23, against Villareal in 2008

LA LIGA PLAYER OF THE MONTH

PLAYER WITH MOST OFFICIAL MATCHES PLAYED

Since his debut for the Catalans, Barcelona’s Number.10 has racked up 778 appearances for his club.

PLAYER WITH MOST MATCHES PLAYED IN THE LEAGUE

TOP SCORER IN THE CHAMPIONS LEAGUE FOR BARCELONA

He has 120 goals, almost 100 more than all the other Catalan players. The second on the list is Rivaldo with 25 goals.

ONLY PLAYER TO SCORE IN SIX OFFICIAL COMPETITIONS

Messi scored in all six competitions in 2011, equaling the feat achieved by Pedro Rodríguez in 2009.

OTHER ONE OF LIONEL MESSI’S RECORDS

Messi is the only player in the world only player in history to win the Ballon d’Or, FIFA World Player, Pichichi Trophy and Golden Boot in the same season. It happened in the 2009/10 season. Another day, and another set of records broken by Lionel Messi.

Lionel Messi from @FCBarcelona is the 2019 Ballon d'Or winner! THAT'S HIS SIXTH ONE! #ballondor pic.twitter.com/dLndTZNeeW

All-time top scorer in a calendar year. He scored 91 official goals in 2012. With Barça, 84 (59 in the league, 13 in the Champions League, 5 in the Copa del Rey and 2 in the Super Cup) and with the Argentine national team, 12. He also managed another 5 in friendlies with Barça, which would see the figure rise to a total of 96 goals

The longest scoring streak in the league. He scored 33 goals in 21 consecutive matches from matchday 11 to 34 in the 2012/13 league season.

Top scorer in a European League since the establishment of the Golden Shoe trophy in the 1966/67 season. Set the record by scoring 50 goals in La Liga 2011/12

GOAL OF THE TOURNAMENT

The best goal in the quarter-final stage of Champions League: 2018–19

The best goal in the semi-final stage of Champions League: 2018–19

OFFICIAL: Lionel Messi's free-kick against Liverpool is the Champions League goal of the season 🥇

While Lionel Messi bashing records was a common sighting at Camp Nou, the situation might change after the veteran’s departure. The left-footed strikes won’t be there, the mind-boggling assists will be missing, and Messi won’t be tearing apart all the La Liga records. The Argentine won’t be saving FC Barcelona in pressure situations and although the forward’s time with the club ends, the legacy left behind by Messi will be remembered forever.