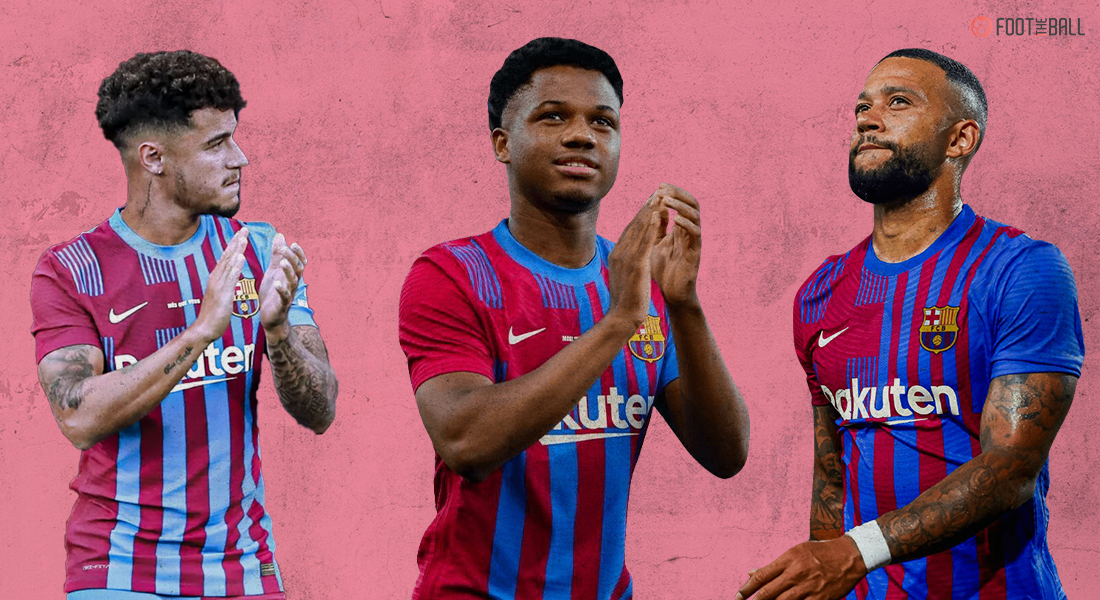 One of the greatest players to have ever played the game of football. Barcelona’s longest-serving player, Lionel Messi has finally joined hands with PSG amidst the Catalans’ financial crunch. The Argentine leaves an irreplaceable legacy of 17 years, a benchmark no player in the world can come closer to. But with Barcelona fans still coming to reality with Messi’s departure, it will be pivotal to see who will don the number.10 jersey at Barcelona next summer.

La Liga’s strict rules have stopped the Catalans from retiring the prestigious jersey with the Blaugranas looking for the perfect candidate. The number 10 might just be a number for a few clubs, but at Barcelona, the two digits are associated with the Argentine’s glittering tenure at Camp Nou. The protesting Barcelona fans had vowed to erupt the Camp Nou with Lionel Messi’s name every time the clock strikes ten minutes during the Blaugrana’s games, something that was seen in their opening fixture. And whosoever is given the number 10 jersey at Barcelona, the pressure attached to it will be immense and he’ll have to deal with it throughout the season, or career.

A homegrown talent, Spanish striker Ansu Fati had solved Barcelona’s striking problems since his debut for the Catalans. A deadly left-winger, Fati chipped in with crucial goals when Barcelona was dealing with the abrupt departure of talismanic striker Luis Suarez. Although a disastrous injury ruined Fati’s fairytale, the 17-year-old created havoc in Spain in his debut season. Racking up 7 goals with a single assist, he could soon be seen galloping on the flanks creating a galaxy of opportunities for his strikers. Fati had a passing completion rate of 84.9% and along with a 60% dribble success rate during his little playing time last summer.

When the youngster recovers from his injury he could be Koeman’s go-to man. Fati’s emergence faded away from the failures of Dembele and Coutinho, giving Barcelona a real shot at glory. And since his injury, the Catalans struggled for goals explaining why the Spaniard is a crucial piece of the puzzle. Fati usually waits near the goal-mouth to pounce on scraps left by the goalkeeper or the defenders, and effortlessly sneaks behind defensive structures to give himself shooting space. Lionel Messi’s heartwarming hug after Fati’s heroics for Barcelona indicated that the Argentine trusted the youngster and he could be the perfect candidate for the number.10 jersey at Barcelona.

The number 10 comes with a huge load of responsibility especially when the predecessor of the jersey ruled the world with his footballing bravery. Like when Ronaldinho passed on the baton to a young Messi and now it’s the Argentine’s turn to find an heir for his throne. But one player in the Barcelona squad who would be familiar with the pressure of the glorious number 10 is Messi’s Argentine colleague Kun Aguero. The Manchester City forward arrived at Barcelona for free to partner up with Messi for the upcoming season. But La Pulga’s catastrophic departure has left Aguero with immense responsibility at Camp Nou.

One of Premier League’s top goal-scorers, Aguero was roped in for Barcelona to fill the void left by Luis Suarez. A target-man in front of goal, the Argentine won’t need a second invitation to shoot a rocket and find the back of the net. You don’t score 184 goals in the Premier League by luck, and Aguero will surely be looking to break a few records in Spain as well. When the striker returns from his injury, Koeman could play him alongside Depay and Griezmann with Aguero solely focussing on scoring goals for Barcelona. A perfect contender for the number-10 jersey, Aguero would look to mirror what he did for Man City.

The front-runner to don the prestigious number 10 jersey at Barcelona, Camp Nou’s million-dollar Brazilian baby could be handed over Lionel Messi’s legacy. Coutinho arrived in Spain with a massive price tag attached to him and has never been able to justify the numbers. The Brazilian, once considered Premier League’s hottest prospect, failed to replicate his Liverpool heroics for the Blaugranas. But reports coming out of Spain have suggested that Ronald Koeman and company are once again prepared to invest in Coutinho, maybe for the last time.

After Messi’s departure, Coutinho could partner with Memphis and Griezmann, and the trio could accomplish the Catalans’ silverware dreams. Although in the last few seasons, his greatest performance has come playing against the Blaugranas in their shambolic 8-2 defeat to Bayern Munich, the Brazilian proved to the world that he still has some potential in him. If Koeman shows trust in Coutinho once again, La Liga could once again witness those thundering strikes rattling the roof of the net.

Dutch striker Memphis Depay is enjoying a mouth-watering start at Camp Nou. Essential in Barcelona’s first win in La Liga, Depay assisted the opening goal scored by club veteran Gerard Pique. Depay was purchased by Barcelona after Lyon couldn’t handle the stardom surrounding Depay with the Dutchman’s hunger to win silverware bringing him to Spain. And since his arrival, Depay has shown extreme loyalty to the Catalans. Reportedly he lowered his wages even after arriving for free, has settled in quite comfortably with Barcelona’s squad, and looks prepared to bring back the glory days at Camp Nou.

In the recently concluded pre-season Depay played a gigantic role in all of Barcelona’s triumphs and the Dutch star truly deserves to carry forward Messi’s legacy. Having played across different destinations in Europe, Depay arrives in Spain with a huge responsibility to lift a depleted Barcelona squad. He has already worn the number 10 on his back for Les Gones and La Oranje, and like Aguero could easily handle the pressure that would come along with it.

The leader of FC Barcelona’s B squad, 22-year-old Alex Collado could be a surprise package for Koeman and La Liga this summer. An attacking midfielder, Collado loves to dart near the oppositions’ goal-mouth dribbling past several defenders before either himself finding the back of the net or locating a teammate. Numerous scouts and pundits have highly rated the Spaniard and he’s considered to be the next big thing coming out of La Masia. The youngster, like Riqui Puig, loves passing the ball around the field, dictating the centre of the pitch, and constantly asking his forwards to make those darting runs.

In the 83 games he has played for Barcelona’s B team, Collado has scored 18 goals combined with 11 assists. The perfect replacement for Lionel Messi, Collado, like the Argentine, loves creating opportunities and also scoring them. If the Spaniard is given the number 10 jersey by Barcelona, he could effortlessly handle it and can surely become the heart of Ronald Koeman’s midfield alongside Pedri, De Jong, and Busquets.