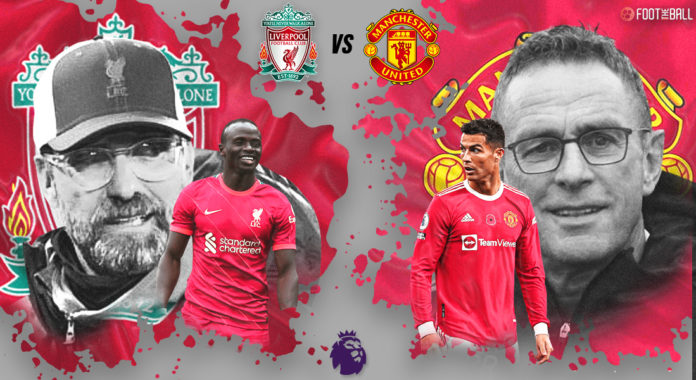 One of the most iconic rivalries takes centre stage as Liverpool host Manchester United.

The Reds marched into the FA Cup final with a 3-2 win over Manchester City. Liverpool’s dreams of a quadruple are still alive as Jurgen Klopp keeps pushing the right buttons. Mo Salah’s dip in goal scoring has been balanced by his partners stepping up. Ibrahim Konate is on a hot streak while Sadio Mane grabbed a brace against the defending champions.

Moreover, the addition of Luis Diaz has provided the extra spark with Diogo Jota ever shining. Liverpool thumped five past their opponents in the reverse fixture which was the beginning of the end for Ole Gunnar Solskjaer.

The Red Devils have been in indifferent form of late. A defeat at Everton was followed by a crucial win over Norwich City. The deficit to Spurs in fourth place is just three points. Coupled with Arsenal in a rut, United know an improbable win will be a big boost.

Cristiano Ronaldo is fit and firing again but the defence continues to look iffy. Harry Maguire will have to rally the troops expertly if the backline is to remain solid.

With a cloud of questions hanging over the incoming manager, Ralf Rangnick will know avoiding defeat will be crucial. Moreover, the lack of another reliant goal scorer could be key against an opponent whose defence can be caught out.

These two have always served up some of the most memorable affairs. Liverpool have held the upper hand in recent times but United can be unpredictable. Who comes out on top will be decided by how the teams approach the opening minutes.

Liverpool rested Joel Mario, Diogo Jota and Jordan Henderson on Saturday. All three should be back in the starting eleven.

United rested Fred, Raphael Varane, and Scott McTominay on Sunday. Ralf Rangnick confirmed that they will most likely miss out again.

Can Manchester United season be saved? The chances are bleak

It’s tough to choose only one impactful player for Liverpool. In recent form, it has to be Sadio Mane. The Senegalese’s position was thought to be in danger when Diaz was signed. However, Mane has shown why he continues to be one of the deadliest goal poachers of this generation.

Relentless pressing from Sadio to double our lead 👏 pic.twitter.com/F9iHJtyXxN

He grabbed a brace against City, and the anticipation of pressurizing Zack Steffen into a mistake was predatory. With 13 goals in the league, there’s no chance why Mane can’t add more. Both of United’s right-backs are fallible in the face of world-class danger. The centre backs have crumbled easily under pressure and need to be extremely alert to Mane’s movement.

Only one man is sustaining United’s charge for the Champions League. Cristiano Ronaldo netted a hat-trick against Norwich, including the first free-kick in many years. Those three goals took him to 21 for the season, by far the leader for United. Ronaldo’s expert movement inside the box and ability from anywhere makes him a lethal proposition.

If he can get into decent positions and a good supply, United are unlikely to be blanked. Though the prospect of going against Liverpool’s centre backs is intimidating, they can be surpassed as the season has shown.

In conclusion, there seems to be only one winner in this showdown. Liverpool are in an unrelenting mood of late. They cannot afford to drop points in the title race. Manchester United, for their part, have it all to do. The Champions League looks a long way off now. Therefore, FootTheBall predicts a 2-0 win for the home side.