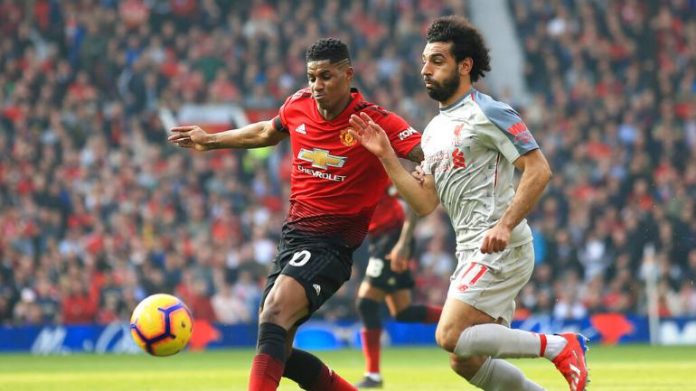 Liverpool dropped two points but moved back to the top of the Premier League after holding Manchester United to a 0-0 draw at Old Trafford on Sunday night.

The result puts Liverpool one point ahead of Manchester City, who didn’t have a league game at the weekend as they beat Chelsea on penalties in the Carabao Cup final at Wembley.

The game is likely to be remembered for an injury-strewn first half which saw United lose Ander Herrera, Juan Mata and Jesse Lingard to injury, while Roberto Firmino limped off for Liverpool.

Lingard had perhaps the best chance of the game before his injury, but his effort was saved by Alisson Becker, who was able to get an arm on the ball as the England international tried to take the ball around him.

Liverpool were the better of the two teams in the first half, while United were unable to react at the break as a result of their injuries, even though their point means they remain unbeaten in domestic competitions since Ole Gunnar Solskjaer took over in the dugout.

Arsenal took advantage of United’s two dropped points and moved up to fourth thanks to a relatively routine 2-0 win at home to Southampton, who remain in the relegation zone.

There was good and bad news for Tottenham away to Burnley: the good news was that Harry Kane returned to action with a goal after six weeks out through injury; the bad news was that Burnley secured a 2-1 win to strike a huge blow to Tottenham’s title hopes, while giving themselves a huge lift away from the relegation zone.

Spurs coach Mauricio Pochettino argued with referee Mike Dean after the final whistle and later apologized for his actions.

There were three penalties in the match between Bournemouth and Wolves, which ended 1-1.

Josh King netted for Bournemouth and Raul Jimenez for Wolves, before King sent his second spot-kick wide of the post with five minutes to go to see the points shared.

Leicester City parted company with coach Claude Puel after they lost 4-1 at home to Crystal Palace as the Eagles swooped for three vital points in their battle against relegation.

Newcastle also eased their relegation fears as Huddersfield made it easy for them at St James’ Park. The visitors arrived rock bottom of the table after taking just one point from the last 39, and were down to ten men after captain Tommy Smith was sent off in the 20th minute, allowing Salomon Rondon and Ayoze Perez to score two vital goals for Rafa Benitez’s side.