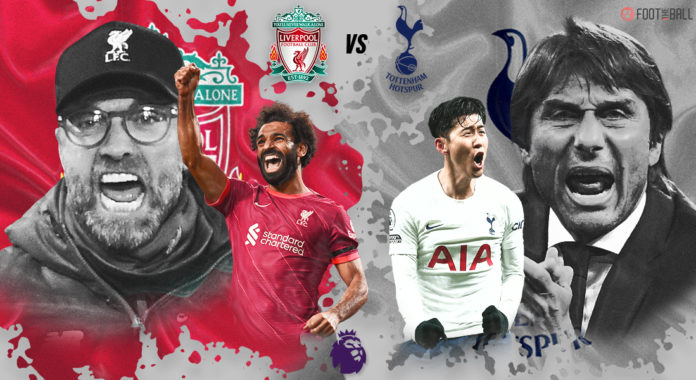 Title chasing Liverpool welcome Tottenham Hotspurs to Anfield in an extremely pivotal match of the season. The Premier League title could be decided on the 8th of May. A slip for Liverpool against Tottenham might mean that Manchester City will become champions.

The stakes for Liverpool could not have been higher, especially since they will be welcoming a resurgent Tottenham Hotspurs who themselves are looking to book a place in Europe for next season.

Liverpool are currently chasing the fabled quadruple, as they sit 2nd, one point behind Manchester City. Jurgen Klopp’s Reds have been the best attacking side in the Premier League this season. The last time they dropped points in the league was against Manchester City when the match ended 2 apiece.

In the Champions League and the Premier League they have looked flawless otherwise. Villarreal did give the Reds a scare in the first half of the 2nd leg Champions League, but a mere tweak from Klopp’s side saw them win the game 3-2 on the night.

The German coach would be wary of the threat Antonio Conte’s Tottenham pose to Liverpool. But the Reds would give it their all in this game because chasing Manchester City is no easy task .The ‘Cityzens’ also have a relatively easy run in at the end of the season, this means that Liverpool would look to win against Tottenham at all costs.

Tottenham Hotspurs on the other hand are looking to secure a European spot by the end of the season.Anything lower than a Europa League spot would not sit well with Antonio Conte. Since his arrival at the Lillywhites his team’s form has been patchy.  In their last 5 games in the league they have lost one and drawn one.

They have won 3 out of the last 5 in some style, putting on an attacking masterclass in each game and dominating their opponents with ease. A sign that Conte’s tactics are starting to work and that the players are finally buying into his ways.

🎙️ "It was important for us to win today."

Antnio Conte is a man with very high standards and if he does not get  that Europa League, he could potentially leave Spurs at the end of the season. Especially since he is probably the best manager Tottenham have at their helm since Poch, they would be hoping that they can secure a win against the imperious Liverpool to make sure the Italians standards are met. Can Conte’s Tottenham hinder the charge of Klopp’s Liverpool.

Liverpool have a fully fit squad going into this match against Tottenham. We expect Jurgen Klopp to play a full-strength side. The front 3 he puts out against the team from London would be interesting to see. Luis Diaz and Diogo Jota have made themselves unbenchable, a great headache to have for any manager.

So do not be alarmed if Jota is benched and Diaz starts on the wing against Spurs. Whatever lineup Liverpool put out they will go into this game as favourites.

Tottenham Hotspurs are also lucky that they have not got to deal with a load of injuries in the squad. Tanganga, Doherty and Skipp will be unavailable due to injury and will most likely not feature till end of the season.

Conte has somewhat found his starting 11 at Tottenham now , the one most likely to take the pitch against Liverpool.

Any of the Liverpool attackers could be picked as the game changers for the match against Tottenham. The form of Sadio Mane is something Spurs should worry about. Also Luis Diaz and Diogo Jota have also looked superb this season. But how can anyone not pick the Egyptian king Mo Salah. He has been phenomenal this season, more often than not looking like the best player in Europe this season.

Mohamed Salah’s stats for Liverpool in all competitions this season;

He has scored a ridiculous 44 goals in 45 appearances in all competitions. As he is chasing records he would be extra motivated to get his name on the score sheet.

Tottenham should be happy that their winter acquisitions have been performing well since their arrival. Rodrigo Bentancur and Dejan Kulusevski have done well to fit into Conte’s system. In fact much like Liverpool, Tottenham can also boast a deadly attacking trio of their own. Probably the deadliest in the League right now in Kane, Son and Kulusevski. But the stand out performer for the Lillywhites this season has been Son.

Son Heung-min has scored 1️⃣1️⃣ goals with his left foot this season in the Premier League, the most by a right-footed player in a single season… 🤯 pic.twitter.com/uRZc61FIUS

The Korean has 19 goals and 8 assists in league play this season and sits 2nd behind in the scoring charts only behind Salah.

This match promises to be a thrilling ride, especially with overly expressive managers on the sidelines for both Liverpool and Tottenham. The stakes for both teams going into this match are extremely high, any slip up could completely destroy their end of season objectives.

However we at FootTheBall think this match is going to end in favour of Liverpool who will thrash Tottenham 4-2 at Anfield and continue to keep the pressure on Manchester City.