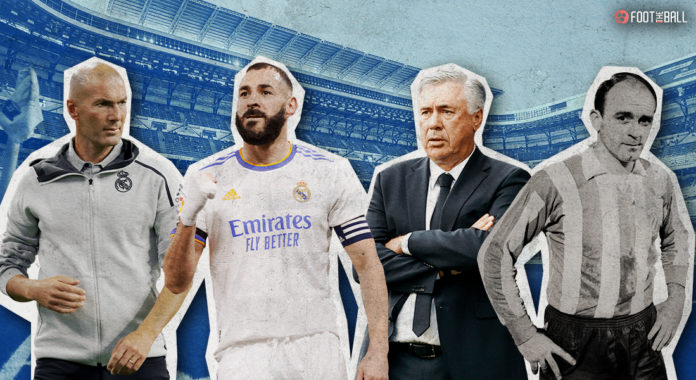 This run of unrealistic comebacks would be called overkill if this was a movie but we have seen it happen with our own eyes. Fans want to believe that it’s the magic of the Bernabeu that doesn’t only facilitate but rather causes these performances. Some say it’s the mental fragility of the opposition. Some say it’s simply Carlo Ancelotti’s eyebrows.

Give them some credit

To attribute their success to these romantic ideals is tempting but it does this great side a huge disservice. Madrid won all three ties effectively because they took their chances while their opponents did not. Lionel Messi did not score his penalty in the first leg, Romelu Lukaku had gilt edged chances in extra time in the second leg and Manchester City could have had two-three more goals in each leg.

Simply put, Real Madrid’s execution was better than that of their opponents. They have players with the individual quality of Luka Modric and Karim Benzema who will take advantage of any minor mistake made. They have the likes of Vinicius and Rodrygo who have a bag full of pace to spare and another bag full of tricks. They also have Thibaut Courtois, who is pound-for-pound arguably the best goalkeeper in the world. Their success should not be so complicated. But it is.

It is easy to say that Madrid are in the final because they have individual skill, ruthless finishing, and maybe a little bit of luck. Los Blancos will say luck has nothing to do with it – Dani Carvajal was in the exact position he wanted to be when Phil Foden smashed his shot into him from six yards out with the rest of the net gaping. Or Ferland Mendy meant to deflect the shot off Foden off the line and away from danger instead of into him and back into the goal.

But they would be wrong. Luck has had a major part to play in Real Madrid’s run, as it does for almost any side that reaches the final of a knockout competition. Cup competitions have a high variance and the best strategy for teams is to minimise it.

It's crazy that this team is in its 10th UCL semi in 12 years, and 5th final in that time span. And instead of running its course, they're set up so well for the future. This is the beginning of a cycle that barely ended.

Luck though, still does not explain it all. Madrid’s tactics do not aim to minimise the variance, rather they do the opposite. Ancelotti’s side have thrived in chaos, drawing well-drilled disciplined opponents like Man City and Chelsea into free-for-all slug fests.

Of course, these sorts of matches suit Madrid better and that is why they try to create them. The first half yesterday at the Bernabeu had them in control of the ball but they were short of ideas and created few openings. They need an open game for the individual skill to thrive and it has worked for them to create these scenarios where the opponent has to come for their neck.

That still however does not explain why Madrid execute better than their opponents. To understand that, we need to go back to the four basic tenets of coaching – technical skill, tactical knowledge, physical ability, and psychological strength.

None of the sides they overcame lacked individual talent of their own. Chelsea and Man City were far superior tactically. You could also argue that the English sides were better prepared physically thanks to their exceptional squad depths and the demands of the Premier League. That only leaves psychological strength.

Is Madrid’s success down to their innate mental superiority? The evidence certainly seems to point towards it. Luck can explain one or maybe two cup runs but this was the Spanish champions’ 10th semi-final in 12 years to go with four out of the last eight trophies.

If this was skill or physicality or tactics, they would be dominating the league as well but they have won only three out of the last 10 La Liga trophies or four out of the last 14. Maybe the side is built for cup competitions more than league football. That would surely mean they dominate the Copa del Rey? This is also not true – they haven’t won the Spanish cup in the last eight seasons, failing to reach the final in that period as well.

There is thus something about the big stage, about the Bernabeu that gives Madrid an extra edge. Ancelotti’s side can perform better than anyone when the stakes are at their highest, when the pressure might become unbearable for others.

What gives them the edge, only Madrid know. It is a well-kept secret passed on down from Di Stefano through Raul and Casillas to Ronaldo and Benzema. It could be the crowd that pulls in the goals, or the ghost of Puskas that puts them in, or Carlo Ancelotti’s eyebrows that hypnotise opponents. Who are we to deny anyone their own romantic interpretation of the game?