Bring on the blue half! 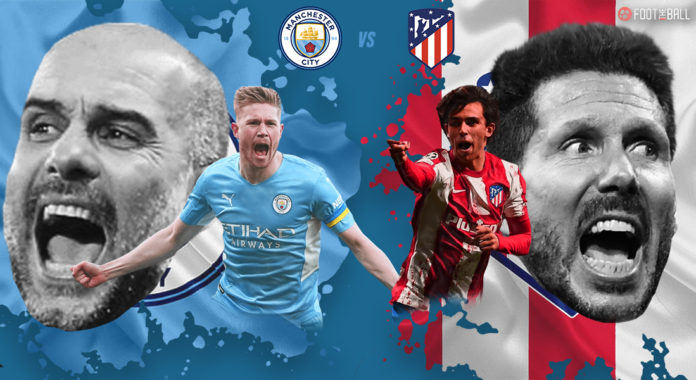 The UCL is back! After a dramatic international break, Europe’s elite club competition is back with a bang.

After knocking out Manchester United in the Round-of-16, Atletico Madrid are out to get the blue half of Manchester. Simeone’s team travels to Etihad Stadium, hoping to do another giant-killing. Manchester City remain the favourites to lift the UCL title this season. However, Atletico would relish the chance to make it a dogfight.

With the removal of the away goals rule now, Atletico Madrid would fancy their chances of coming out on top in a scrap. This is a potential banana skin for the English Champions.

The Argentine’s former sides will go head-to-head for the first time in the UCL. 👀 #UCLDraw pic.twitter.com/BmdGOCeLDQ

City come into the game on the back of a routine win against Burnley in the Premier League. Atletico Madrid, on the other hand, have found their form. They are on a winning run which has them in 3rd place.

Guardiola has something of a mixed bag on the injury front. The Spaniard is set to welcome back John Stones. The English CB missed the game against Burnley after taking a knock on international duty.

However, the key piece of the defence, Ruben Dias, is facing an extended spell on the sidelines. Therefore, he is not expected to feature here either. Meanwhile, Kyle Walker is facing the last of his three-match suspension. His pace could be a huge miss against an Atletico side looking to counter at will.

On the attacking front, Guardiola has an embarrassment of riches. As Atletico Madrid sit back and look to hit teams on the counter, Guardiola could go with tricky wingers instead of those who look to run in behind. Therefore, there could be a place for Bernardo Silva and Riyad Mahrez. Raheem Sterling could make way.

For Atletico Madrid, Carrasco is in the same boat as Walker in facing a spell on the sidelines as a result of suspension. Left-back Renan Lodi, matchwinner against Manchester United, is back fit. He is joined in the return from the treatment table by Rodrigo de Paul.

On the attacking front, Luis Suarez has shown good recent form. However, it looks like the Griezmann-Felix duo is set to continue. The onus will be on Suarez to impact the game off the bench.

Manchester City would look towards their influential playmaker, Kevin de Bruyne, to conjure a moment of magic. Atletico Madrid play in a deep block in knockout ties. Therefore, it becomes difficult for runners to play behind the defensive line. In such a case, a playmaker like Kevin de Bruyne becomes invaluable to City’s cause.

The Belgian plays passes and crosses with laser-like accuracy in packed boxes. Manchester City’s runners from midfield would look to overload the attacking areas. If de Bruyne connects with a single pass in a game of 90 minutes, City could well be ahead, such is the accuracy of his pass.

Atletico Madrid would likely spend the majority of the 180 minutes camping on the edge of their own box. Therefore, they would need a heroic effort from their defensive line to stay in the game. City like to dominate possession and spread the pitch wide. Atletico Madrid’s wingback would have to have the game of their lives to shut City’s attacks on the side.

Furthermore, they would need to be clinical and decisive in their rare forays forwards. Renan Lodi plays a huge role here. Already a matchwinner this season against Manchester United, the challenge facing Lodi against Man City is different entirely. If Lodi has the game of his life, Man City’s potential banana skin could well be realized.

Despite Atletico Madrid being on a winning run, also dominating Manchester United both home and away, toppling the blue half should prove a mountain too tall to climb.