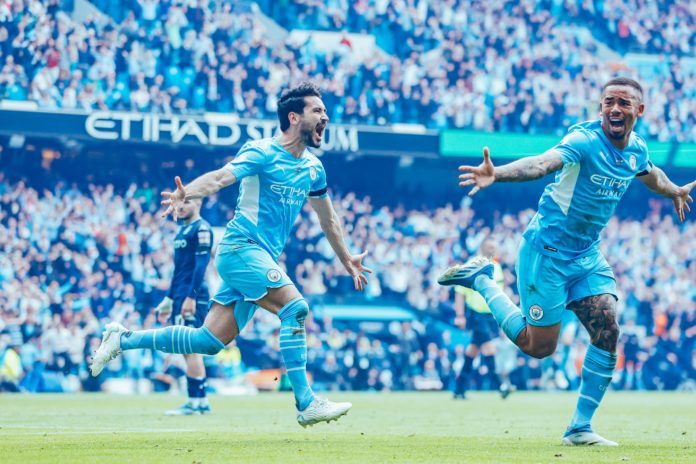 Pep Guardiola’s Manchester City produced a thrilling come-back as they came from two goals down to beat Aston Villa on the final day of the season and secure the Premier League title, edging out Jurgen Klopp’s Liverpool by just one point.

City started the game on the front foot, eager to get a goal to settle their nerves. Joao Cancelo was particularly active form the right-back area but did not seem to be on the same wavelength as his teammates. Villa looked nervy, especially stand-in goalkeeper Robin Olsen who kicked the ball out of play a couple of times and was dangerously closed down by Gabriel Jesus.

Most of City’s good moments came down the right channel, Riyad Mahrez sat down Matty Cash before crossing but Lucas Diane got a head to the delivery ahead of De Bruyne. Ollie Watkins gave Fernandinho some problems with his physicality but even when Villa ventured forward, it was City who looked dangerous on the counter-attack.

Looking for the opener 🔐

De Bruyne led a brilliant counter-attack in the 24th minute which led to a Foden shot being deflected just wide. City turned up the heat as the game approached the half-hour mark with Jesus and Mahrez both having half chances but failing to get a shot on target.

It was against the run of play that the big moment of the first half happened in the 37th minute. Villa were able to bypass City’s press for once and the home side was too open at the back. Ramsay played in the overlapping Digne who had far too much time to measure a cross towards the back post. Cash ghosted in ahead of Cancelo to get on the end of the delivery and give Villa the lead.

Ramsey advances, Digne crosses and Cash rises to head home at the back post! Up the Villa! 🤩

The goal gave the away side much more confidence. Watkins and Coutinho shot from range soon after but did not trouble Emerson. The English striker should have done better a minute later when he got in behind Fernandinho but was unable to get a shot away under pressure from John Stones.

Guardiola’s men tried to get the equaliser before the break but the Villa defence stood tall and cleared away all balls into the box. A tame header from Aymeric Laporte brought the first shot on target for City right on the stroke of half-time.

The City manager made a substitution at half-time, throwing on Zinchenko for Fernandinho with Cancelo switching to the right and Stones moving to centre-back. The change seemed to do the trick with City making much better inroads in the opening exchanges of the second half.

Zinchenko crossed dangerously for Mahrez only to see it intercepted. Cancelo’s beautifully shaped cross found Jesus but the Brazilian was unable to get the right contact sliding in when he really should have hit the net.

Despite their dominance, Villa remained a threat. Olsen caught out the City defence with a long ball from the back and Watkins was through on goal. The striker though could not get the ball under his control and his off-balance attempt bounced agonisingly wide.

City settled into their comfortable passing patterns but failed to create major chances. Sterling came on for Mahrez and added some energy but there was still a lack of scoring opportunities. De Bruyne had a free-kick attempt go wildly over in the 67th minute from a good position.

And they were made to pay for their profligacy. It was another long kick from Olsen that undid City. Watkins won the first ball and Coutinho, formerly of Liverpool, ran in behind before turning Laporte and firing a very good finish past Emerson at the near post. Liverpool still drew 1-1 at Anfield to Wolves but the Reds needed one goal while City needed three to secure the title.

Guardiola threw on Gundogan to turn the tide and he got an instant response as the German got on the end of a Sterling cross to cut the deficit back to one goal for City. That seemed to give City the confidence they needed as they made it 2-2 in the 79th minute.

Zinchenko beat his man on the left before setting up Rodri on the edge of the box. The Spaniard’s controlled side-footed attempt flew through the crowd before settling in the bottom corner past a stranded Olsen. City were level but they still needed another to grab the crown should Liverpool score.

And two minutes later they had the goal to win the title. De Bruyne picked up a loose ball before driving into the box and firing a low cross. Gundogan was once again on hand to apply the finishing touch to make it 3-2 and send the Etihad into raptures.

With the lead secure, City resorted to game management especially as Liverpool scored two goals in quick succession to go 3-1 up. Much to the relief of Guardiola and the blue half of Manchester, City saw out the game to secure a fourth title in five years.

Here are our key talking points from the match –

Guardiola gets it wrong then gets it right

Man City lined up with a very susceptible defence with John Stones at right back and Fernandinho at centre-back. Villa exploited this pairing throughout the first half with the Brazilian in particular struggling in his final appearance for City.

However, Guardiola made the right changes at half-time in the second half to correct his initial mistakes. Zinchenko was much more productive on the left and Cancelo on the right. Gundogan’s substitutions was truly the inflection point and Sterling played his part by assisting the first goal.

The Spaniard is often derided for getting his tactics wrong in big matches but he deserves a lot of credit for City’s comeback to secure the title.

Opposite to Guardiola, lined up Liverpool legend Steven Gerrard. In Villa’s lineup was also Phillipe Coutinho who came so agonisingly close to winning the Premier League with Liverpool in 2013-14. Anfield prayed for their old heroes to do them a favour and they did try their best.

Gerrard’s set-up was as expected but he managed to get the execution right from his players for 75 minutes. Coutinho was often hidden but shone when given the chance, getting the second goal for Villa. In the end, City outclassed their opponents but it was an almighty effort from the visitors.

City’s first Premier League title came in the most dramatic of circumstance when Aguero scored a goal in injury time to deny Manchester United. Their next win came in 2014 when the race went down to the wire on the last day again. Their title in 2019 was also won on the last match day.

A decade on from their first title, City produced another dramatic classic with three goals in five minutes to turn the game around. Truly the stuff of champions from Guardiola’s side but one cannot be sure how much more can City supporters’ hearts take.