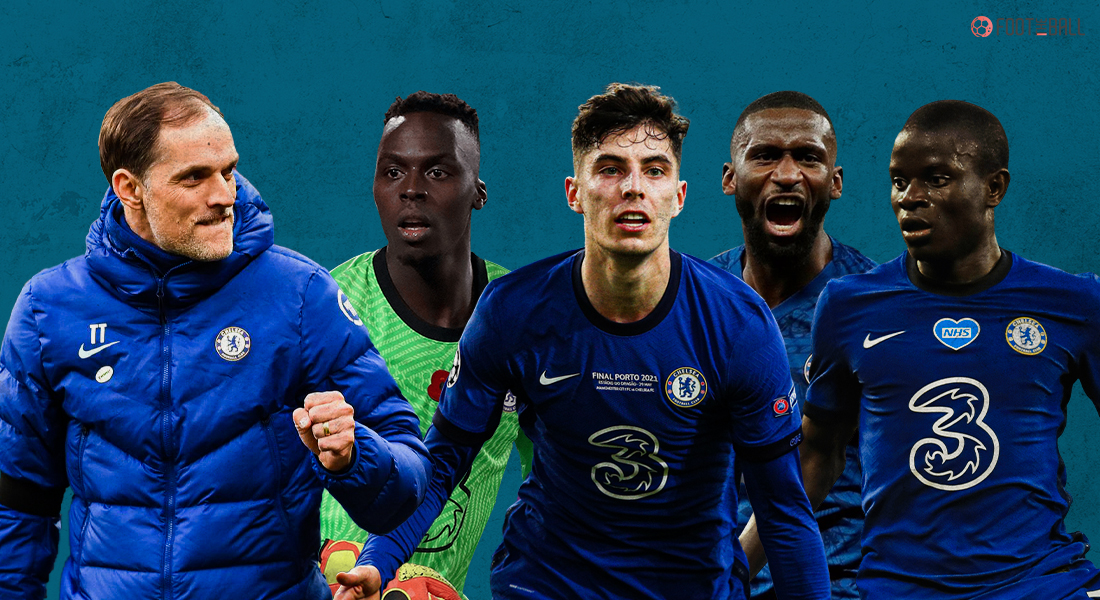 The pinnacle of European club competition pitted debutants Manchester City against Thomas Tuchel’s Chelsea in Porto. Pep Guardiola had made it into the final after 10 long years while the Blues were trying to win the trophy for the second time in their history.

Both teams were on the front foot right from the start, looking to get a crucial opening goal. Sterling, a surprise starter, was set on goal after a raking ball over the top. However, he failed to bypass the goalkeeper sufficiently to get a shot away. On the other side, Werner scuffed a shot after a cutback from Mount inside the penalty box. The German followed that up by two quickfire shots, that failed to test Ederson sufficiently from good positions.

Werner denied by Ederson as Chelsea take the game to City 🌪️

With attack being the theme, each team’s defence was having to be solidly on their guard. The game’s pace was electric as the respective attacks time and again tried to get in behind. Most of speed came down the wings behind some of the fastest players in the game. Chelsea’s half was rocked by an injury to Thiago Silva. The Brazilian felt his hamstring go and was replaced by Andreas Christensen.

Christensen is on for Chelsea. pic.twitter.com/TAAlgdbCNL

It was the Blues whose dominance paid off. Mount’s brilliant through ball from near the centre found Havertz, who having lost Zinchenko, took the ball past an onrushing Ederson and slotted it into an empty net. That was the way it finished at the break, with Guardiola having some deep thinking to do.

The second half started much more calmly. Both teams probing cautiously without giving their defences away. City were dealt a massive blow ten minutes in, after collision between De Bruyne and Rudiger left the Belgian unable to continue. That left Jesus having to come on for a player who had been City’s most influential this season.

With Fernandinho also on, City seemed to be regaining a foothold into the match. Azpilicueta was forced to clear from in front of his own goalkeeper after a slide pass from Mahrez. However, it was the Blues who almost made it 2-0. Havertz and substitute Pulisic combined to set the American free whose shot at goal missed by inches.

Sergio Aguero came on for his final City appearance, looking to get his team level. The game entered the final ten minutes, still 1-0. City’s changes were having a difficult time getting into the game with Chelsea keeping their ever compact shape. That was tested heavily as the game entered injury time with City piling players forward.

However it was Chelsea and Thomas Tuchel who held on to win the competition on the back of their imperious first half attacking performance and defensive masterclass all throughout.

Here are the three key takeaways from this epic crunch:

Tuchel’s men were far quicker off the blocks than their opponents. Their pace and intensity to take the game to City made them more of an attacking threat. Werner, Havertz, Mount were all finding joy in and around the box. James and Chilwell were constantly going up and down the pitch, and nullified Guardiola’s wingers.

Kante completely marked down De Bruyne, while the false nine approach with no defensive pivot made them vulnerable at the back. All of this culminated with Chelsea getting more of the chances, and the opening goal scored by Havertz just before halftime.

1 – Kai Havertz is the first player to score his first UEFA Champions League goal in a final since İlkay Gündoğan in 2013. Timely. #UCLFinal pic.twitter.com/9uxr9QKEek

The second half had more of a sedate beginning. Chelsea looked happy to knock the ball around and not take excessive threats. Pulisic, who became the first American to play in a Champions League final, had a great chance to make it 2-0 with twenty minutes to but his shot went just wide of Ederson’s goal.

However, the Blues kept their shape extremely compact and stifled City in the final third. Their excellent marshalling of the backline led some stout stops towards the end of the match to see them through for a famous, famous win.

The decision to leave Rodri and Fernandinho both on the bench, while starting Sterling and Silva left a lot of fans scratching their heads. That lack of defensive minds left City open to attacks time and again. Their defence was working overtime in order to keep the scores level.

38. A superb recovery run and tackle by Zinchenko denies Havertz a great chance to score! Still all action in Portugal! 🙌

In attack, Chelsea’s backline nullified all of their wingers, leaving De Bruyne and Foden to fend for themselves. The Belgian was anonymous during the first half and with no central striker either, the muscles of the debutantes were no match for the speed merchants around City’s captain.

HALF TIME | Trailing at the break.

Their evening got bad to worse within 10 minutes of the second half. De Bruyne crunching clash with Rudiger left him with a swollen eye that meant he had to be substituted. Jesus and Fernandinho, the new men, tried to get City back into the game but it was not easy. They rarely threatened Mendy in goal who remained relatively untroubled.

Mahrez had the chance to level it right at the end but his tough shot flew wide off the bar. The game finished 1-0 to Chelsea, with Guardiola left to rue some of his personnel choices in this summit clash.

This final was a breath of fresh air from what we had witnessed in the recent past. The atmosphere with fans was terrific and it was reflected on the energy from the players. Chelsea came out as deserving winners after City’s famed attack fell flat on the biggest stage. Tuchel can rightfully celebrate his first continental silverware while Guardiola will once again face uncomfortable questions about his tactics as the wait for City’s first European trophy goes on.