Draw does not disappoint 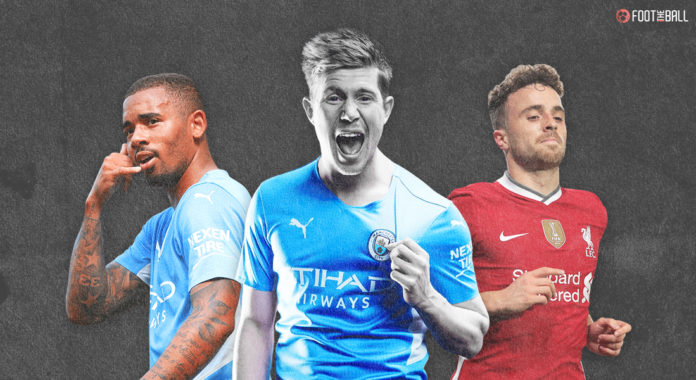 One of the most important clashes of the entire Premier League season gets underway at the Etihad Stadium. Manchester City host Liverpool with the two teams separated by just a single point. Whoever wins will gain a massive boost for the title race in the final weeks.

It took all of six minutes for the game to erupt. A darting run through the middle by Kevin De Bruyne set Gabriel Jesus free down the right. His first time cross to Raheem Sterling looked to have set up a sure goal.

6. We'll completely ignore the goal we should've scored seconds earlier! 😂@DeBruyneKev strikes one on his left peg, it deflects and loops out of Alisson's reach and goes in off the post – GET IN!!!! 💪

However, Alisson produced a big save to deny the Englishman. Nevertheless, City kept up the pressure and after a quick free-kick, De Bruyne’s deflected shot kissed the post before going in. Liverpool were struggling to get ahold of the ball as City were being urged on by the fans.

They would be in for a rude shock. Andy Robertson crossed to Trent Alexander-Arnold who laid the ball off to an onrushing Diogo Jota who never misses these days.

The intensity of the match was off the charts. Both teams were going for it hell and leather. Ederson almost gifted Liverpool a goal by failing to clear a pass but did so just on the goal line. De Bruyne had another sharp chance which was dragged just wide. The great spectacle got another twist soon enough.

A corner from City was cleared only as far as Joao Cancelo. The leftback’s cross to the far post found the run of Gabriel Jesus who had tiptoed in behind the backline. Alisson rushed out to close the angle but there was no stopping Jesus.

Liverpool were having a torrid time every time they lost possession. Jurgen Klopp knew something had to change at halftime. For Pep Guardiola, it was a matter of keeping the tempo same and seeing the win through. That plan went out the window almost immediately after the restart.
A one-two between Alexander-Arnold and Mo Salah ended with the Egyptian sliding a neat through ball to Sadio Mane. With Ederson coming out, Mane produced an unerring finish.

46' – What a start to the half for the Reds! Wonderfully worked down the right, before Salah finds the impeccably timed run of Mane. No mistake with the finish 😍

Suddenly, it was Liverpool doing all the running. Jota had a shot on his left saved by Ederson. City did get back a foothold in the match as time went on. Sterling thought he had given his team the lead again but was denied by VAR calling his goal offside.

The game slowed down considerably towards the end as both sides were wary of conceding. Riyad Mahrez had the best chance in the final seconds but lifted his chipped effort high above the bar. The game finished all square.

They had the most clear cut chances in the first line, regularly troubling a sluggish Liverpool backline. De Bruyne, Cancelo, Jesus, and Sterling all went close with two of them getting their goals. The pressure from City was such that they could have added one or two more. Despite having some issues defensively themselves, City were an attacking behemoth.

Kevin De Bruyne has been directly involved in 8 goals in his last 8 Premier League games vs Liverpool:

However, a disjointed opening two minutes of the second half cost them the win. Pep Guardiola’s face after that Liverpool went in told the entire story. Nevertheless, they had the ball in the net but Sterling was correctly ruled offside.

It was not a vintage Liverpool display by any means. The Reds were hurried and harried by City all throughout the first half. Virgil van Dijk was a picture of disjointedness as Liverpool allowed City to score twice. Though the first one was a cruel deflection, Alexander-Arnold could have done a lot more regarding the second.

Klopp’s side did manage to score twice and were much better in the second half. Salah had a quiet game, apart from the assist, while Luiz Diaz tried his best. The win was not forthcoming and they will need help from other teams now.

It remains as it were. City lead Liverpool by one point with seven matches left. Guardiola’s men have the easier fixture list and Liverpool will worry a bit. There is still chance for a big surprise to occur but it is City’s to lose.