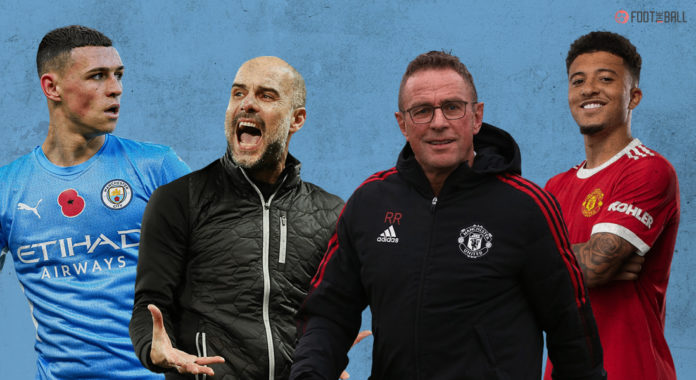 A City United but not on Sunday. The defending champions Manchester City host arch rivals Manchester United. Both teams are competing for different prizes so the three points will be very crucial.

City are feeling the heat from Liverpool, who are six points behind with a game in hand. Pep Guardiola has turned his side into a winning machine but a last-minute defeat to Spurs has weakened his hand. Therefore, they are keenly aware of avoiding any slipups with only 11 games left.

A lucky win against Everton was followed up qualification in the FA Cup. Raheem Sterling is having great comeback season, while the attackers around him are not lagging behind either. City’s league best defence will have to be on their guard. A win over United will serve two vital purposes: keeping the pressure on Liverpool along with weakening United’s top-four hopes.

Meanwhile, United are the very definition of inconsistent at the moment. Having drawn twice in February, Watford were able to take a point off them last week. Old Trafford is no longer intimidating, even for the bottom-ranked teams. The wastefulness in front of goal has to be cured quickly if they are to keep hold of the fourth-spot.

Cristiano Ronaldo has struggled mightily this year while Marcus Rashford is woefully out of touch. The backline is blowing hot and cold. David De Gea has been the one standout performer for a long time and has kept his team in matches almost singlehandedly. The whole team will have to bring their A-game as they cannot afford a repeat of the reverse fixture with the chasing pack looking on.

City and United have gone in different directions in recent times but Manchester will either be blue or red soon.

There are no fresh injury concerns for Guardiola. Jack Grealish has returned to full fitness and scored against Peterborough.

Scott McTominay should be back in contention having recovered enough from illness. Edinson Cavani’s participation remains in doubt as of now.

The battle down the flanks will be an interesting watch and City certainly have the upper hand on paper. Raheem Sterling has thrived since being given a consistent run of games and that has helped him 13 goals across all competitions already, including five in his last two games. Playing down his usual left flank, Sterling’s low centre of gravity and uncanny ability to pounce on the rebound inside the penalty box has helped him score throughout his career.

It remains to be seen who starts for United but City will be happy nonetheless. Either Diogo Dalot or Aaron Wan-Bissaka will certainly feel overwhelmed by Sterling and Cancelo on the same side. Sterling knows that he can carry the ball over long distances and City are expert in switching the ball from the back quickly. United have a shaky backline for all purposes which means Sterling can utilise his nous to isolate defenders out of their position in order to free runners in behind too.

Sancho getting back to his Borussia Dortmund levels has been one of the highlights of the recent weeks. Having played him across both flanks since arriving, it does seem like Sancho fits best on the left side. That allows him to cut inside onto his right foot and either shoot or cross for teammates inside the box. Furthermore, his extreme pace and bag full of skills can leave any defence befuddled, with Ruben Dias looking a bit short of his former defensive sturdiness.

Jadon Sancho has directly contributed to a goal in 3 of his last 5 games:

⚽ vs Middlesbrough
⚽️ vs Southampton
🅰️ vs Leeds United

Moreover, Kyle Walker is a very adventurous fullback Sancho can get by taking up good positions behind him. He can also switch sides as it becomes necessary like his bursting run and cross for Bruno Fernandes from the right side against Leeds United. Rangnick knows that Sancho can get the better of centre-backs on most days and with world-class attackers around him, he has the chance to make a real impact.

Manchester will be keenly holding its breath as City and United collide. Ralf Rangnick’s side are in a dogfight while City’s inevitable title looks a bit vulnerable. FootTheBall predicts a 2-0 win for the Cityzens.