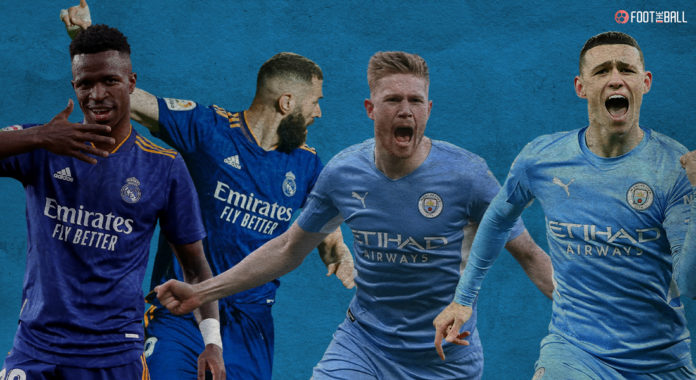 Manchester City and Real Madrid served up one of the best Champions League matches in history as Pep Guardiola’s side edged out Los Blancos 4-3 at the Etihad on Tuesday night. It was an intense end-to-end encounter that left fans truly amazed at the sheer quality on display, right from kick off.

What a game. What a competition. A Champions League classic.

🤯 Sum up this first-leg thriller in one word!#UCL

City were out of the blocks at a hundred miles an hour and they did not have to wait long before opening the scoring. Kevin De Bruyne scored the fastest goal in a Champions League semi-final when he nodded in a cross from Riyad Mahrez, who was left in acres of space on the right wing.

Guardiola’s men smelled blood and they doubled their lead in the 11th minute, Madrid’s defence once again caught napping. De Bruyne whipped in a low cross towards Gabriel Jesus and David Alaba scuffed his clearance, allowing the Brazilian to finish past Thibaut Courtois emphatically.

The left side seemed to give the home side plenty of joy with Phil Foden getting the better of Dani Carvajal repeatedly. He put in another dangerous cross although this time Alaba was able to clear it away. Madrid responded by pushing their press high and Benzema managed two recoveries in dangerous areas for Vinicus but nothing came of them.

City though continued to look the more dangerous, especially on the break as Madrid left acres of space in midfield and in-behind. Mahrez fired a shot into the side netting after being played in by Bernardo while Foden saw his attempt go agonisingly wide after a fast break involving all of City’s attacking players.

Madrid’s first chance of note came after the half-hour mark when Alaba headed wide from a Benzema cross after a short corner. That was a warning sign for City which they did not heed. Two minutes later, the in-form Benzema pulled one back, volleying in an excellent finish on the volley from a deep Ferland Mendy cross.

The goal gave the away side more confidence, Rodrygo tested Emerson from a narrow angle soon after. That forced Guardiola to swap John Stones for Fernandinho at right-back before the 40th minute and both sides seemed to be happy to reach half-time with no further scares.

The second half began the same way as the first and Man City nearly had the ball in the net two minutes after the restart. Nacho, a half-time substitute for Alaba, overcommitted which allowed Mahrez a clean run at goal. The winger’s curling shot beat Courtois but not the woodwork, bouncing off the far post. The rebound fell to Foden who had the easiest of tasks to place the ball into a mostly empty net but he managed to hit Carvajal from point blank range.

The miss did not rattle the youngster and he made no mistake a few minutes later to make it 3-1. Fernandinho recovered the ball in the attacking half and played a one-two before crossing towards the back post. Carvajal had no idea where Foden was and it was the simplest of headers that restored City’s two goal cushion.

Fernandinho was the creator of that goal and his actions resulted in another two minutes later, albeit at the other end. The make-shift right back got too tight to Vinicius and got turned easily. There was only one winner in the foot race afterwards and the young winger raced away before finishing calmly past Ederson to cut the deficit back to one.

Both teams took some time to cool off and recover from an intense period of play. Man City dominated possession, probing for openings around the box while Madrid threatened on the break through the ingenuity of Modric and Benzema and the pace of Vinicius.

The next big chance of the match fell to an unlikely source when Zinchenko’s cross found Aymeric Laporte free in the box. The centre-back was unable to get on top of the ball and his weak attempt was straight at Courtois.

OH MY WHAT A GOOOAAAALLLL!!!!

It was in the 74th minute that the next goal came, the longest period in the match without a strike. Zinchenko drove towards the Madrid box and was fouled by Kroos. The Madrid defence stopped waiting for the whistle but the ball had fallen to Bernardo Silva who was active and took a couple of touches before curling in a beautiful finish at the near post.

Madrid were shell-shocked and nearly conceded again in the next minute. Mahrez dazzled the entire defence, jinking past four defenders before firing at goal. The angle was too narrow and his shot trickled across the face of the goal. Modric took it upon himself, as he has done already this season, to turn the tide. He sold the Man City midfield a dummy before shooting just wide from outside the box.

Ancelotti’s men did wrestle back control and had a golden opportunity to again pull a goal back when the ball bounced off Laporte onto his hand. His arm was raised above his shoulder and the referee pointed to the spot, as per the rules. Benzema stepped up to take it and he scored it in style with a delightful panenka penalty to make it 4-3.

City riposted immediately going with the night’s trend. Ruben Dias nearly got on the end of two Mahrez crosses in quick succession but remained an inch away from City’s fifth. That was the last big chance of note from a breathless match as Guardiola’s City carry a one-goal lead to Madrid.

Here are our talking points from the match –

Real Madrid were hit like a truck in the opening minutes by Manchester City’s intensity and they remained very open throughout the match. Their artistic players like Luka Modric and Toni Kroos were unable to cope with the incessant harrying of Bernardo Silva, Rodri and Kevin De Bruyne.

What they missed most though was their own destructor-in-chief, Casemiro. The Brazilian was deemed fit enough only for the bench and Madrid’s performance would have been much better with him on the field. Fede Valverde covers a lot of ground but he lacked the experience and tactical nous of Casemiro.

The first goal could have been prevented had the Uruguayan dropped back to track De Bruyne or to just cover the space, something Casemiro is an expert at. The space left during counter-attacks too would have been better covered, allowing Madrid more control of the game.

Guardiola was unable to call upon the services of Joao Cancelo, who was suspended and Kyle Walker, who was not fit enough. This left Man City light in the right-back area with make-shift right back John Stones also passing a late fitness test.

The Catalan manager called off the Stones experiment in the 36th minute after the Englishman was guilty of giving the ball away in dangerous areas multiple times. His replacement though was 36-year old defensive midfielder Fernandinho. While the Brazilian did create City’s third goal, he was also at fault for Madrid’s second.

He was also targeted in the second half with Vinicius’ pace being a clear mismatch. Walker should return next week while Cancelo will be available again and Guardiola will be a relieved man.

Real Madrid had already been involved in a couple of Champions League classic with their comeback over PSG and a breathless second leg against Chelsea. City meanwhile had shown the mettle they lacked in past seasons by overcoming Atletico Madrid in the previous round. It was a clash of the titans and it did not disappoint.

City may have a slender lead going into the second leg but there is all to play for. Casemiro will be back for Madrid while Guardiola will be able to call upon Cancelo and Walker. It is highly unlikely that the first leg will be top but fans will be hoping for more of the same next week.