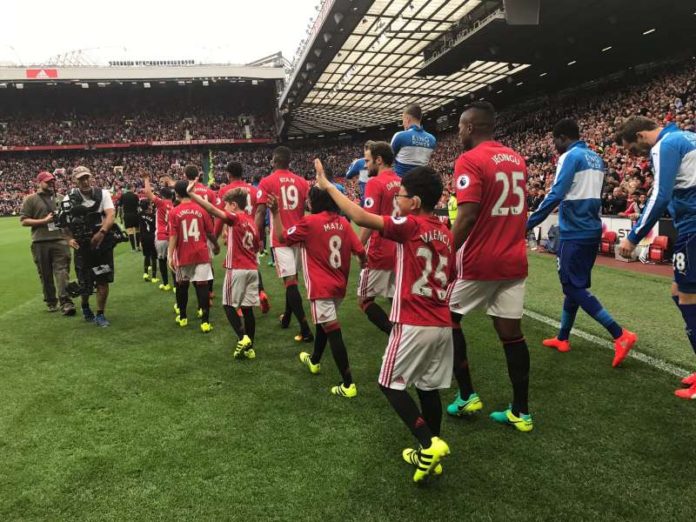 Amid the screaming cheers from around the pitch of the Old Trafford, Zhao Junkai, 8, was overwhelmed when his dream came true.

“It’s my dream to stand here in this stadium, to stand along with these great players,” said the boy from southwestern Chinese city of Chengdu who describes football as his life.

Zhao, with 10 other children were mascots brought by Chevrolet around the world to Saturday’s match between Manchester United and Leicester City in the English Premier League. They walked into the Old Trafford hand in hand with the players of Manchester United and each of the first team member wore a match shirt with the name of his mascot on the back.

The campaign, for the third year in a row, aims to inspire fans of all ages to make the most of life’s possibilities through football.

Xu Haoyin, 10, another mascot from China’s southern city of Guangzhou shared Zhao’s feelings when he set foot into the legendary Old Trafford.

“I dreamed of seeing Wayne Rooney,” Xu said. “I shook hands with him and played football with him.”

Three days before the match, Zhao and Xu, along with other mascots from countries including Republic of Korea, Mexico and the United States, met with the Manchester United first team players and the club manager Jose Mourinho, played with team’s legends including Nemanja Vidic and Denis Irwin, and attended the teams’ Soccer School before touring the club’s stadium.

Chevrolet said that the 11 children were selected because they embody the spirit of play and have embraced football in a way that has changed their lives.

Zhao comes from a family of devoted Manchester United supporters while Xu and his father have a shared passion for football.

China has a huge fan base of the Manchester United team. Chevrolet, official shirt sponsor of the legendary team, has also seen a huge potential market in the world’s most populous country.

Chevrolet Executive Vice President Alan Batey said despite an economic slowdown in China, the world’s second largest economy, his company still has strong confidence in the huge market. He said he hopes more Manchester United fans in China would know the Chevrolet brand and more children like Zhao and Xu can realize their football dreams.

When it comes to PKs and goal celebrations: practice makes perfect! #ChevroletMascots pic.twitter.com/fIpSjD0yPk

Manchester United Group Managing Director Richard Arnold said that Chevrolet’s mascot moment is becoming a fine tradition in the Old Trafford calendar, an initiative that complements what the club stands for. “While we are proud of our global reach, we recognize that when our players take to the field, children around the world dream big.”

Vidic, who coached the mascots over the past few days, said the positive energy displayed by these mascots have touched him.

“If you want a strong football nation, first have make your kids love and play football,” he told Xinhua in an interview.

“Football inspires the kind of passion in people around the world that can transcend cultural and political differences and unite communities in a transformative way,” said Tim Mahoney, chief marketing officer of Global Chevrolet. “For our children, it is a game that teaches them that anything is possible through hard work and dedication.”