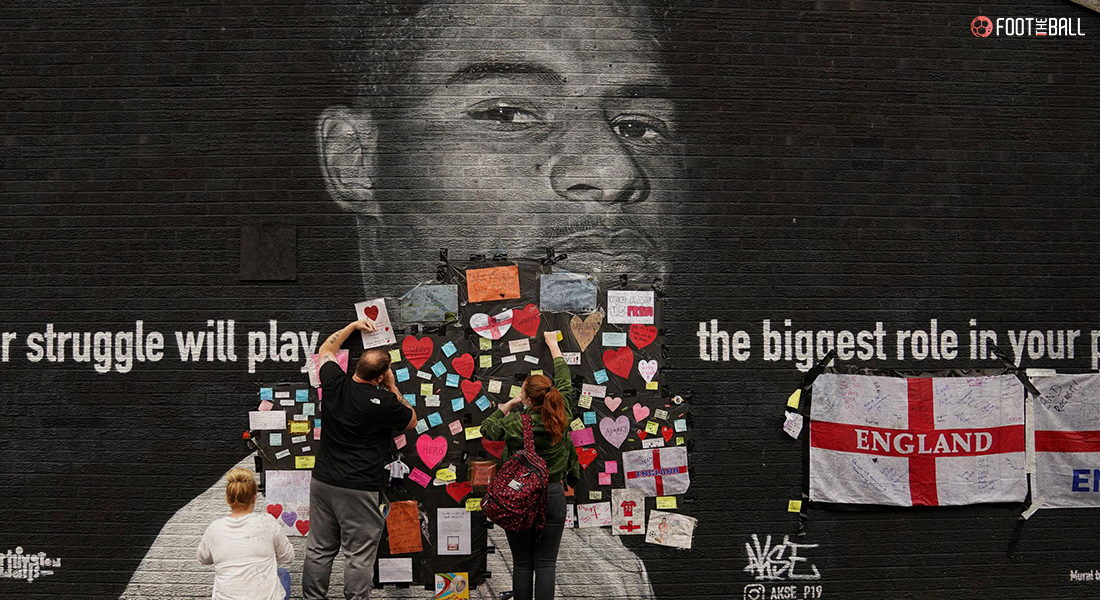 England’s defeat in the final of Euro 2020 has elicited a wide range of emotions. While most of it has been around how well the team has played and how uniting their performances have been for a fractured country, a particularly ugly issue has also come to the fore. Something that many onlookers thought will arise since the stakes were just too high to fail.

The issue is of course England’s problem with racism surrounding some players in the squad. That has been a long standing issue in the country and the outcome of the final put that into further light. The reason for this being that the trio of players who missed the penalties in the shootout are all non-white.

Marcus Rashford, Jadon Sancho, and Bukayo Saka have been subjected to horrendous and vile abuse since Sunday night as support from all corners poured to combat it. Even though that has been enough to dim the noise, you can only ignore it to a certain extent. This is a ugly reality that players have to acknowledge which is intensely hard in normal time, let alone after such a defeat.

Last night, Rashford became the first of the three to put out a statement, collecting his thoughts and being as honest as is possible of his assessment on all that has happened. In an Instagram post, the 23-year-old reiterated his astonishment and hurt at missing his penalty, something he can score “in my sleep.” Rashford acknowledged that the loss felt even tougher due to the occasion, and how long fans have had to wait.

He went on to state that how much the England players had bonded and this is just the start of good things. His post ended with a reflection that his identity is his alone and that nobody can take away, vowing to return stronger. Rashford’s response followed the likes of wishes expressed by other current and former professionals just how important this team’s achievements have been. Furthermore, many of the players are associated with noble causes off the field, none more so than Rashford himself. He has been at the forefront of providing meals for at-risk children across the country, forcing the government to reverse its earlier policy of cancelling the meal programme.

Rashford has donated to food banks, helped setup more avenues for resources and even donated more than his entire wealth for the cause. That’s why it was especially jarring to see a mural of him defaced in Manchester. However, the response to that has been been wonderful with people from the community decorating the covered part with handwritten notes and letters of encouragement. It is safe to that hate has probably not won this time around but should it still exist in this day and age.

To people of colour impacted by racist responses, remember that our humanity and value to society is not determined by our accomplishments. Respect is the bare minimum of what we deserve. pic.twitter.com/CuzFv7p23t

Racism of any kind has no place in societ anymore but the fact remains that mindsets have to change. Raheem Sterling has been a favourite target of the media, repeatedly being attacked for his choices or personal decisions. Unsurprisingly, he was targeted this time as well, for not taking a penalty in the first five. Even though Gareth Southgate made it amply clear that it was not up to the players, hatred rarely listens to reason. Rashford’s message has been both inpsiring and uplifting, with equal measures of taking the blame and focusing on the positives.

However, not every expression of support should or has gotten the appreciation. The Sun, a media house notorious for its history of inflammatory reporting and peddling hate has been bashed for its apparent ‘change of heart.’ That has followed the likes of TV personality Piers Morgan, British Home Secretary Priti Patel and even the Royal household.

All of them have either taken the issue of racism lightly or termed it as a political gesture which has to be kept separate from football. In that regard, Rashford and other players have made it clear that they will not stop being true to themselves. In fact, Rashford has been personally targeted for his off field activities, with detractors calling for him to get back to football more. He has become an easy target just due to the enormous amount of work he has been able to do for society at large, and how vocal he has been in standing up for the cause.

"It starts at the very top."

Football is no longer only about one’s contributions on the pitch, and it is time to acknowledge that. The issue of racial abuse and hatred aimed at players every time something does not go well has to be tackled in a proactive manner by big tech companies and the police authorities. Rashford and others have proved that nothing can keep them down and they will only rebound better from all of this, and for once, the majority of the country seems to be on their side.