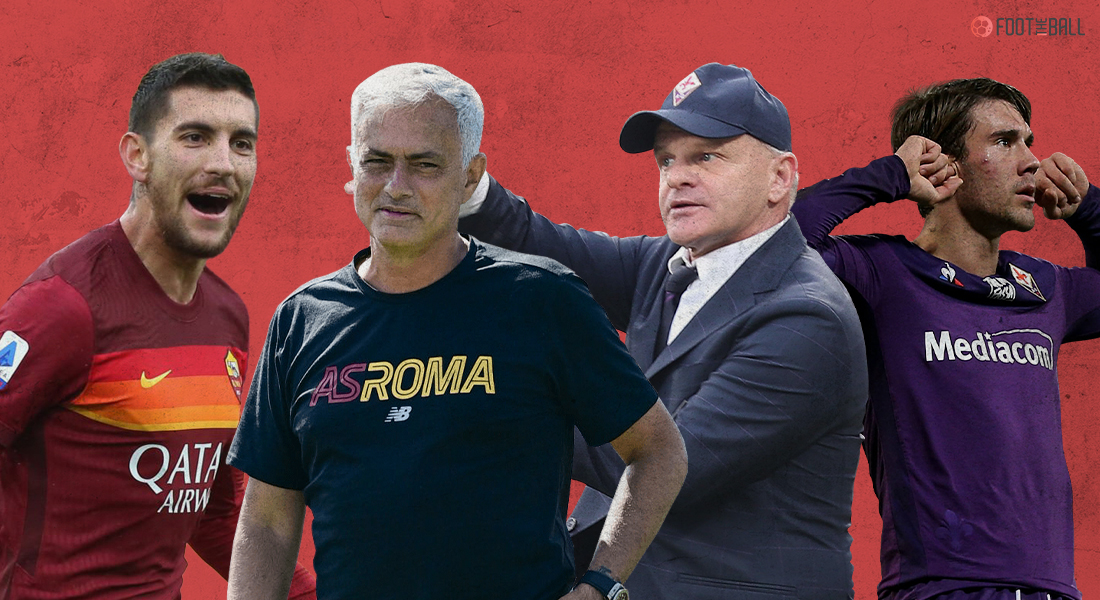 FIORENTINA VS AS ROMA

Roma face Fiorentina in their opening game of Serie A on Sunday as Jose Mourinho makes his comeback in Italy after a decade. Roma are the only elite team in Serie A that still haven’t adapted to the cultural revolution happening in Italian football. Antonio Conte, Roberto De Zerbi, or Gian Piero Gasperini have revolutionized their respective clubs over the years but Roma are still lagging behind sticking with the traditional defensive style of play. Roma finished 7th in the league which clearly meant they needed to make big changes in their camp and they started with bringing the ‘Special One’ in.

Fiorentina themselves have been facing a lot of issues with their management over the last few months. After Guissepe Lanchini left teh club in November 2020 and the club signed Cesare Prandelli as his replacement who failed to impress as they finished 13 last season. Gennaro Gattuso joined them in the summer but just after 22 days in charge, he left the club since he disagreed with the club’s transfer strategies. Fiorentina have decided to go ahead with Vincenzo Italiano as their manager and the fans will get a glimpse of how their team looks under their new boss.

Sofyan Amrabat has been recovering from a groin injury for the past couple of months and hence will probably not be a first-team regular just yet. No other player is out due to injuries and suspensions for Fiorentina.

Leonardo Spinazzola broke his Achilles tendon, @SkySport just reported. He’ll be out for many months. One of the best players of the Euros so far. 🇮🇹 #Spinazzola pic.twitter.com/kWQ6VPfetm

Chris Smalling, Villar and Spinazzolla are out injured and won’t be available in the pecking order for Jose Mourinho. The rest of the team is fit and ready for battle. Tammy Abraham has just joined the club and hence we feel he won’t start just yet.

The player has been making headlines in the transfer market as he is one of the hottest targets for major European clubs this summer. The player scored 21 goals in the league last season and was the 4th top scorer in Serie A. He is their main man up front and is involved in almost all their attacking plays. All that attention must have fueled the player and he would be determined to make an impression in the league opener.

Mkhitaryan is the chief creator in Roma’s squad having finished last season with 10 assists to his name. He also scored 13 goals for the club and has been flying in the preseason games as well. The youngsters in the team look up to him for inspiration as he leads their frontline. The player has played under Jose Mourinho in Manchester United which is why he is the manager’s most trusted man on the field.

Both sides haven’t been impressive over the recent years and are looking to revive their club’s reputation with new managers in charge. Roma are stronger than Fiorentina on paper and will play in the back of a 2-1 win against Trabzonspor in the UEFA conference league. The home side are also a strong side but Giallorossi might just edge through the fixture. FootTheBall predicts Roma 2-1 Fiorentina.