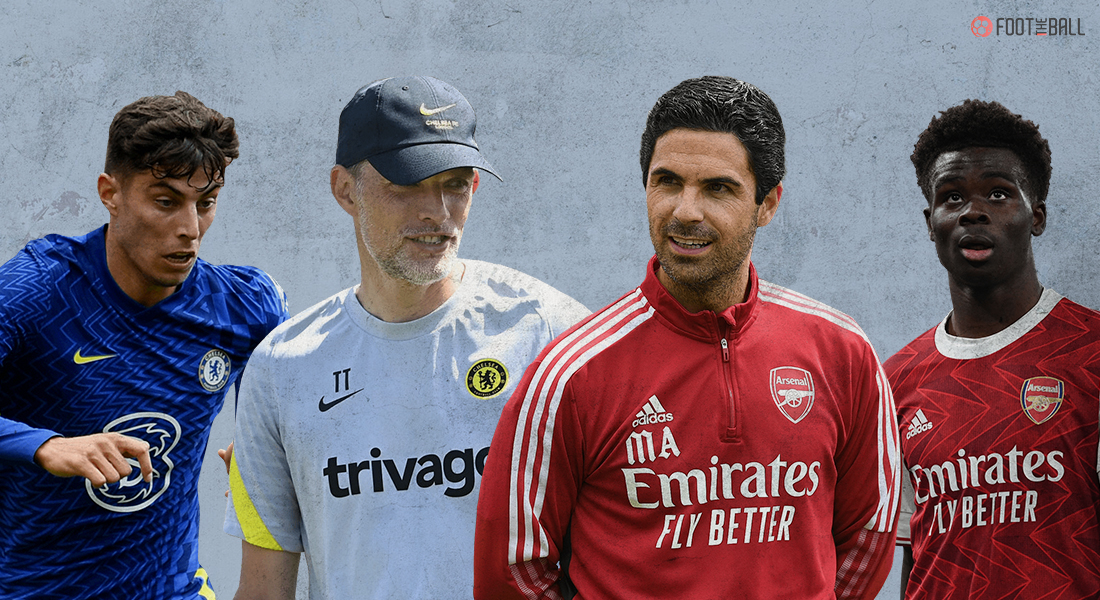 It is the battle between two London clubs again as Arsenal host Chelsea at the Emirates Stadium on Sunday in the Premier League. The Gunners contested against newcomers Brentford in West London last week, losing 0-2 to the promoted side.

Meanwhile, Chelsea hosted another London club – Crystal Palace – at Stamford Bridge last week as they won by a comfortable 3-0 margin. As such, Arsenal will be looking to change the tide with a win, while Chelsea will be aiming to build on a strong start to the season in England.

As the much-anticipated match in the British capital draws closer by the day, FootTheBall presents to you a comprehensive and in-detail match preview of the same.

Arsenal will be without both their veteran forwards Alexandre Lacazette and Pierre-Emerick Aubameyang (also captain of the team) through illness (Covid-19), while Eddie Nketiah misses with an ankle injury.

Thomas Partey misses through injury (ankle ligament) as Mikel Arteta attempts to resuscitate their season after a dismal loss to Brentford, although they have signed Martin Odegaard from Real Madrid, but he won’t feature in the weekend’s game against Chelsea.

On the other hand, Thomas Tuchel won’t have a lot of injury headaches for this match as he prepares to feature Romelu Lukaku in the starting line-up for the Blues for the first time this season in what looks like a well-rounded overall squad.

N-Golo Kante has recovered from an ankle injury, while Hakim Ziyech is still recuperating from a shoulder injury he picked up in the European Super Cup win.

For the Gunners, the one who has the ability to change the game by taking it by the scruff of its neck is the Belgian Albert Sambi Lokonga, who was easily their best player on the pitch in West London last week against Brentford.

He was involved in building up attacking passages of play for Arsenal whenever he had the opportunity and displayed the ingenious skill of anticipating the attacks of the opposition team and holding them off from breaching the defence line.

Therefore, a lot of responsibility will rest on the 21-year old’s shoulders when Arsenal square up against the Blues in the English capital this weekend.

For Thomas Tuchel’s side, the addition of another Belgian in the form of Romelu Lukaku up front will be a boon for the Blues as he will bring tons of experience and expertise from Milan, reducing the burden on fellow forward Timo Werner.

In full and in his own words. 🎥

In case you missed it earlier! 😁 pic.twitter.com/oZ9GbwTzKU

Chelsea’s other players such as Mason Mount, Christian Pulisic and Kai Havertz will likely link up with Lukaku with the Belgian becoming the focal point of Chelsea’s attack as they bid to challenge the Premier League title holders Manchester City this season in England.

The former Manchester United player was the ‘Most Valuable Player’ in Serie A last season while he helped Inter Milan to the Italian league title in more than a decade, and now will be tasked with doing the same at Chelsea in London.

Chelsea look like an even stronger side after the inclusion of Romelu Lukaku in their ranks and they will be looking to stamp their authority in the British capital this weekend with a comprehensive and convincing victory.

Arsenal, on the other hand, are in desperate need of a rebuild and rejig if they are to sustain themselves in the top four of the Premier League and will be looking to avoid a second straight defeat that might raise a lot more eyebrows.

Expect the Blues to easily win this, given the relatively novice squad that Arsenal have at the moment in North London.