Real Madrid will take the title race down to the final weekend after they defeated Athletic Club 1-0 in a cagey affair in Bilbao, thanks to a freak goal from Nacho Fernandez.

The win takes Zinedine Zidane’s men to 81 points, two behind Atletico Madrid after the Rojiblancos defeated Osasuna 2-1. The result ensures that the title will be decided on the final day of the league season, 23rd May. Real Madrid host Europa League finalists Villarreal while their neighbours travel to relegation threatened Real Valladolid.

And then there were two… 👀

The title race will be decided on the final weekend in #LaLigaSantander! 🏆 pic.twitter.com/vjWT9HFwBJ

As discussed in the preview, the game was a cagey affair, with nothing much from both sides in terms of chance creation as there were no shots on target in the first half from either side. The only interesting thing that happened was a VAR check to see if there was an infringement from a Real Madrid corner, but nothing came out of that.

In the second half, though, things started to heat up, Athletic’s keeper Unai Simon called into action from a Luka Modric shot that was parried away. Casemiro went on to rattle the crossbar after connecting the ball with a towering header which should have put Los Blancos in the lead. 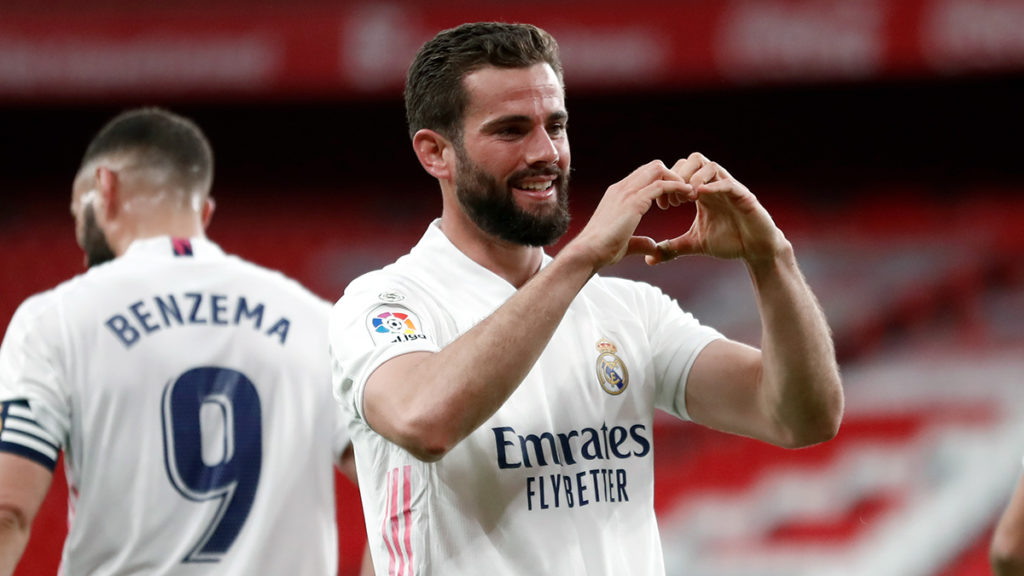 Nacho celebrating after scoring the only goal in the game against Athletic Club. (Image Courtesy: Real Madrid / Twitter)

Shortly afterwards, an even more improbable source went up with the crucial winner when Casemiro plucked out Nacho at the far post to score what could prove to be a big goal come next week.

Raul García saw a red card late in the game for Athletic Club as Real Madrid held out for a win that keeps them two points behind the leaders with one game to go.

Here are our three key takeaways from the fixture:

NO KROOS NO PARTY

Real Madrid fans feared for the worst when the squad list was announced a day before and it did not feature the name of Toni Kroos. The creator-in-chief for Los Blancos, Kroos’ absence in the team on Sunday was evidently visible as the number of chances created were palpable. 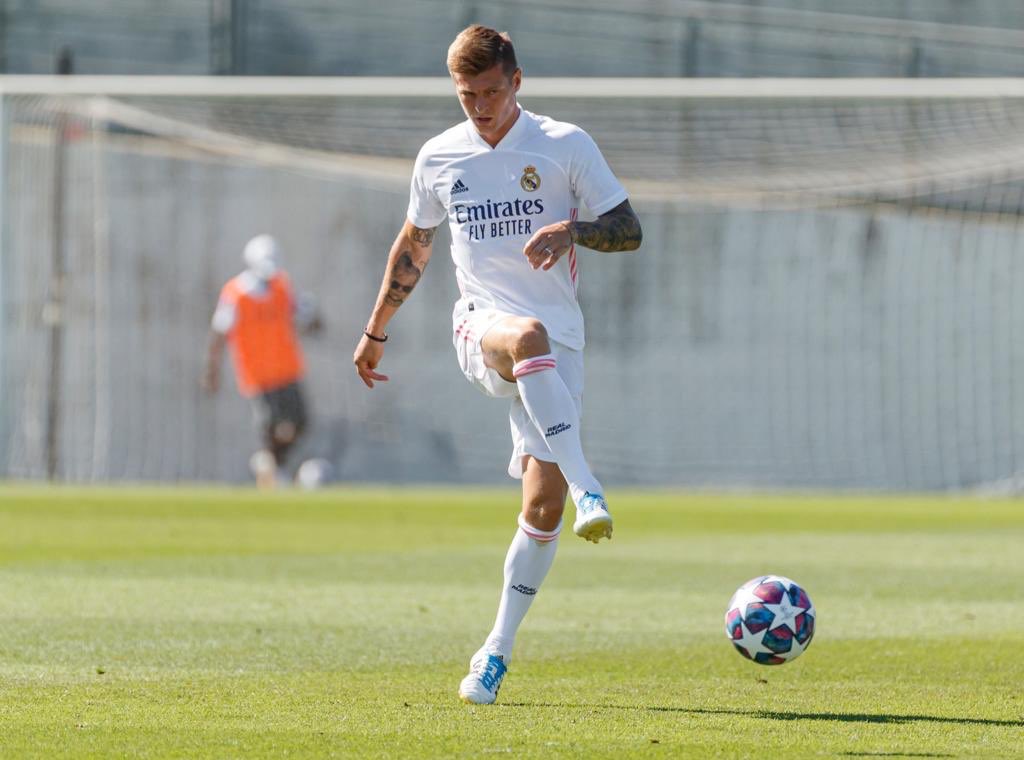 The absence of Toni Kroos in the midfield was visible on Sunday and fans will hope that the German will return to the starting line-up next week. (Image Courtesy: Toni Kroos / Twitter)

Although they won after Casemiro successfully assisted Nacho to score and take the lead, there was no clear-cut forward balls played into the feet of the attackers as Luka Modric wasn’t able to take up the German’s role completely.

Federico Valverde too was slightly off on the ball and fans will hope that they will see the German’s return next week.

As with the Toni Kroos situation, Real Madrid’s defensive show on Sunday had the potential to be a disastrous one, but to the credit of the fringe players of the squad, they did exceptionally well to keep a clean sheet going into next week. 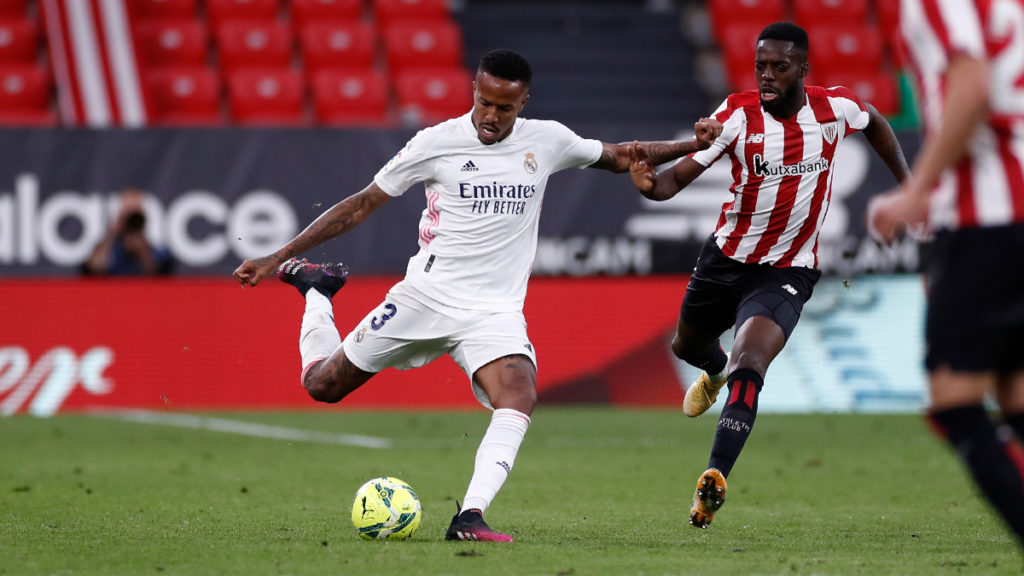 Eder Militao was a rock at the back for Real Madrid against Athletic Club on Sunday. (Image Courtesy: Real Madrid / Twitter)

Without six of first-team defenders, Zidane will be proud of the unit that has shut out Athletic Club’s attack line completely, with the Basque club only having one shot on target the entire game.

Academy graduate Miguel Gutierrez showed tremendous skill and discipline at left-back, while Nacho and Eder Militao might have increased the manager’s trust on them. 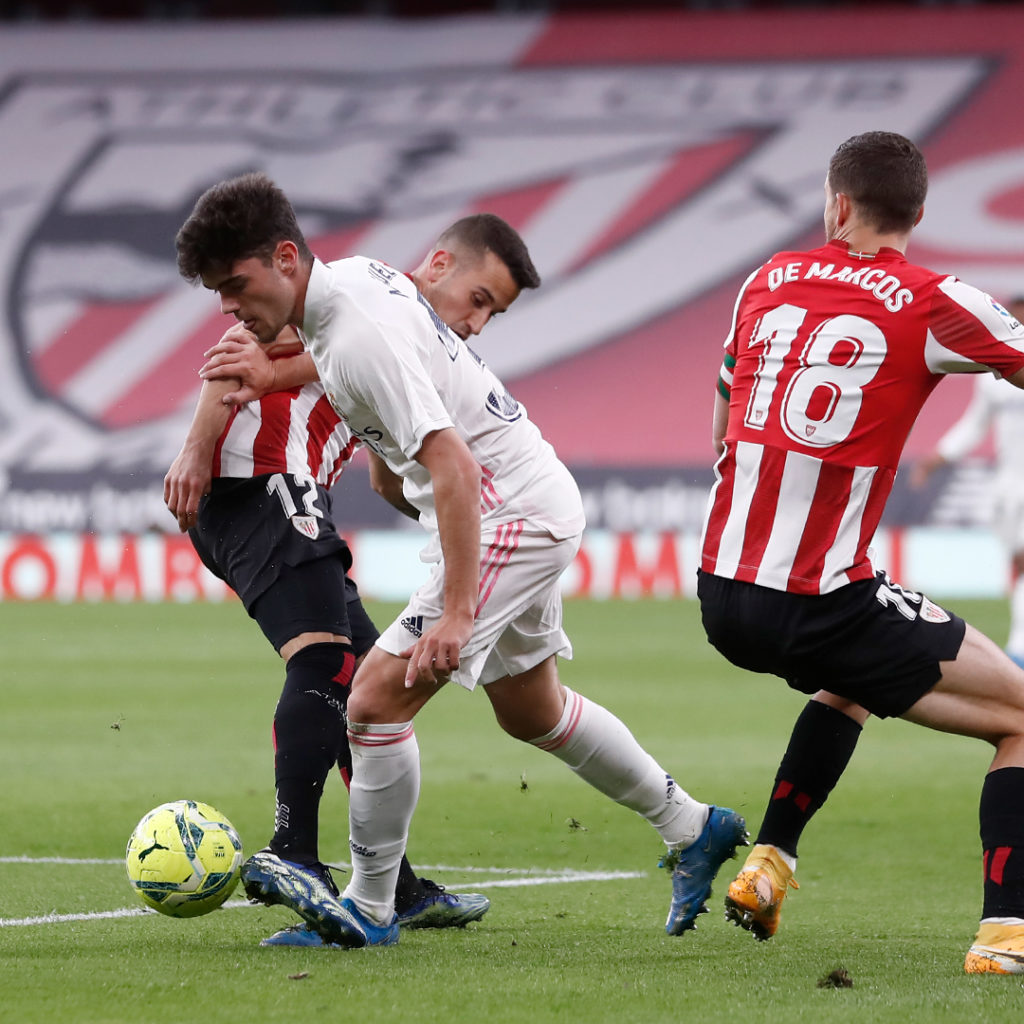 Miguel Gutierrez showed maturity in his play and was key in keeping a clean sheet against Athletic Club on Sunday. (Image Courtesy: Real Madrid / Twitter)

Although Marcelo and Raphael Varane might return to the squad for the final day, they might have to settle for a place on the bench as Zidane might want to continue playing this quartet against Villarreal next week.

CAN ZIZOU USE HIS VOODOO ONE LAST TIME?

With rumours the of Zidane leaving the club increasing day by day, Real Madrid and its fans, and Zidane too, would like to end the season on a high by winning the league after the season that they have had and the Frenchman himself might want to end his Los Blancos’ managerial stint with a trophy.

After an underwhelming start to the campaign which saw the team languishing in mid-table, Real Madrid have been quite the opposite in the second half and that is evident with a 17-match unbeaten run in the league.

While they crashed out of the Champions League in the semi-final, the majority of this season’s problems can be attributed to the injuries that have occurred in the squad, precisely 73 in number.

But the never-say-die attitude has bought them fighting for the title until the final weekend and fans will hope that Zidane can once again use his black magic and win Real Madrid the league title amidst rumours of his departure.