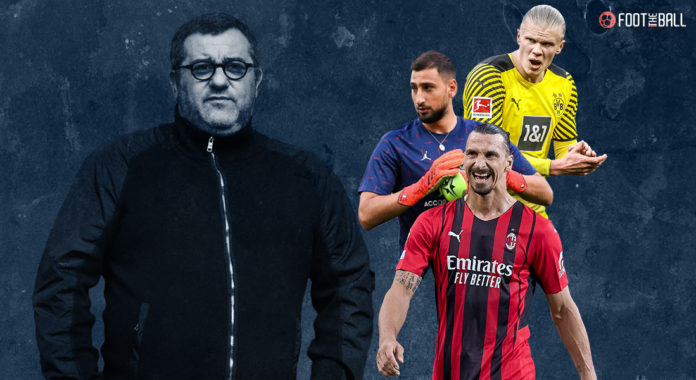 Italian super-agent Mino Raiola has reportedly passed away at the age of 54 after suffering from a long-term illness. The news arrives after a few months when it was reported that Raiola had been admitted to the hospital on account of “a minor surgery”.

The news was announced by reporters in Italy and comes as a huge shock to the world of football.

Mino Raiola was one of football’s foremost agents. He represented the likes of marquee players in Erling Haaland, Paul Pogba, Zlatan Ibrahimovic among others. His was always a no-nonsense, brash style of dealing with the clubs and the media. Due to this, he seldom had frosty relations with clubs.

However, Raiola had always been known for protecting the interests of his clients above everything. He had recently been in the news during the January transfer window when he was on a tour of ‘superclubs’ with Erling Haaland.

Mino Raiola was one of the most powerful agents in world football.

Raiola had always leveraged the talents of his clients to get the best deal for himself as well as his clients.

The upcoming summer had been pegged as particularly lucrative for Mino Raiola, as the likes of Paul Pogba and Erling Haaland had been on the brink of lucrative moves.

Near and dear to clients

Despite his often frosty relations with club executives and his less than ideal comments in the media, Raiola had always had a tight bond with his clients. Many of his clients, like Mario Balotelli and Zlatan Ibrahimovic, considered him part of the family.

The news of his reported demise undoubtedly comes as a huge shock to the footballing world. Mino Raiola had become the poster boy for the profession of clients- equally adored and hated by many. Along with Jorge Mendes, he was at the forefront of this profession’s hyper money-making capabilities. His methods of work might not have been everybody’s cup of tea, but not many could claim that those methods didn’t yield results.

Mino Raiola’s reported death is a huge loss not just for his clients, but for the world of football as a whole.