Mourinho Says He Has Faith In Martial To Improve This Season 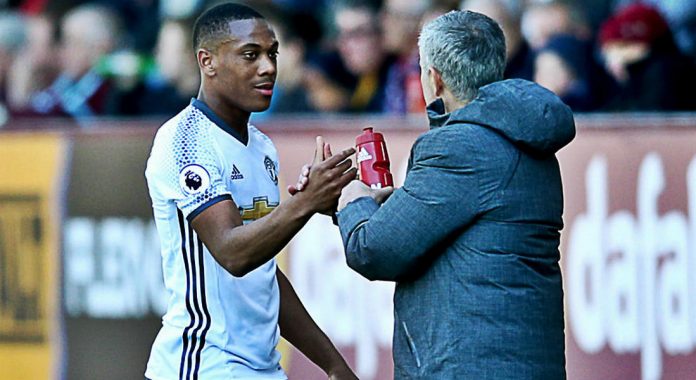 Anthony Martial has drawn a lot of criticism for being inconsistent but Red Devils boss Jose Mourinho has tipped the French forward to shine at Old Trafford.

Mourinho has backed the 21-year-old winger to deliver at Old Trafford this season.

Martial was not given a start in Man Utd’s league opener but the French forward came off the bench a found the net as the Red Devils thrashed Slaven Bilic’s West Ham 4-0 at Old Trafford.

Martial’s future at Man Utd has been questioned amid interest from Inter Milan and now Spurs and also due to United’s pursuit of a winger.

But Mourinho believes that the former Monaco man will prove his critics wrong in the 2017-18 season.

Mourinho said ahead of Saturday’s trip to Swansea City: “I have faith in him. Probably, the player I was looking at [in the transfer market] was not a pure winger, because I have pure wingers.”

“The player I was looking for would allow me to play three at the back and do the wing-backs. As a pure attacking player, Martial is a good player.”

“He is one of the players who will have a better season than last season. I look at my players and I am sure some will be better than they were last season, and Anthony is one of those, for sure.”

Mourinho wants all his younger players to step up, adding: “They’re all young. [Henrikh Mkhitaryan] Micki and [Juan] Mata are close to their 30s. Romelu [Lukaku] is 24, [Jesse] Lingard and [Marcus] Rashford are a good age and they’re all playing. They are also national team players with the chance to play international games.”