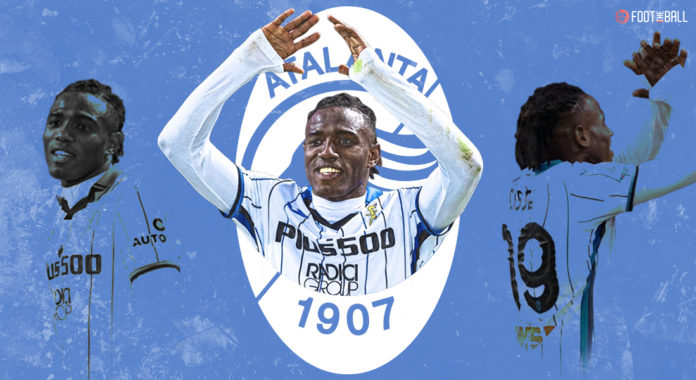 Scoring on your professional debut at 18-years-old? This is the kind of stuff dreams are made of. Well, Moustapha Cisse was certainly in reality when he tucked home a neat finish against Bologna. That goal ensured Atalanta won again to keep up the pressure on Juventus for fourth-spot in Serie A.

Moustapha Cissé made his Serie A debut tonight, scoring in a 1-0 win for @Atalanta_BC.

He was signed by the youth academy last month, spotted playing for ASD Rinascita Refugees, a club of foreign players seeking asylum in Italy, who play in the 8th tier.

However, the goal had an even bigger and incredible story behind it. Moustapha Cisse is no ordinary player. Just over a month ago, he was playing in Italy’s eighth-division for a team comprised entirely of refugees. Yes, it’s true.

Who is Moustapha Cisse?

Cisse was born in Conakry, Guinea and during his early years, a football career seemed far off. However, after going through many personal tragedies, including losing his father, Cisse left his homeland at 16.

He made his way to Lecce and joined ASD Rinascita Refugees. The team was made up of asylum seekers and refugees, with Cisse settling into the ninth division.

The club’s president Antonio Palma said, “That’s [Rinascita Refugees] where Moustapha moves his first steps on the Italian fields. In a short time, he became one of our most important footballers.

He always kept the signboard, he was our best maker.” Cisse was progressing quickly and having people notice him. Moreover, scouts were coming to see games. However, it would take until January 2022 for Cisse to truly change his destiny.

After being scouted by Atalanta, La Dea decided to offer the 18-year-old a contract. Cisse travelled to Bergamo in late February to snap up one of the non-EU slots that teams in Serie A have.

That proved to be a life-changing move for Cisse who was given the number 99. However, neither party would realize how big a deal it would prove to be in less than a month.

It is difficult to say what Cisse’s ceiling is given he has only played one match so far. What can be said with more certainty is that he will continue to get chances. Atalanta are a team that put their faith in youth if the quality is there.

“It’s in Atalanta’s history. The club has always believed in its academy. It’s been so for five to six years, thanks to the president, who chose a coach like [Gian Piero] Gasperini,” assistant manager Tullio Gritti said. “The coach doesn’t have problems throwing on players who have quality, value and a clear head.”

These are the kind of words that will fill Cisse with hope. Yes, he could only feature against Bologna due to a multitude of injuries. However, Cisse knows that if he can continue putting in the hard work and keeping his head down, Gasperini will not be afraid to play him.

Therefore, Cisse can slowly become a regular from the bench in matches for the rest of the season.

Cisse has always been a prolific scorer who knows where the goal is. He netted 18 times in just eight league games for Rinascita Refugees. Moreover, while it was expected that Cisse might struggle at the top level, that did not prove to be the case. Cisse scored three goals in three games for Atalanta’s reserves in March.

This was when Gasperini decided to include him in the senior squad. Atalanta were hit hard by injuries in their attacking areas which forced Gasperini’s hand. However, very few fans would have been expecting to see Cisse make his debut, much less score the winner.

He has the chance to get some more strikes before the 2021-22 season ends. That could see him develop his game further before the next campaign where he will surely be making more appearances.

Moustapha Cisse is a smart operator in and around the penalty box. He feels comfortable having the ball and making things happen. The goal against Bologna was a fine finish which was well thought out.

Cisse received a ground pass from Mario Pasalic and took one touch to control it inside the box. With defenders rushing to get back, Cisse opened up his body and curled his shot past the goalkeeper.

That kind of awareness to keep your composure in front of goal is important. He has pace to get in behind the opponent’s backline and take shots when the chances arise. Gritti summed up Cisse best after his debut.

“Besides his great footbal skills, he’s an exceptional guy… he’s extremely polite, his politeness is an example despite the fact that life hasn’t been easy for him. Yet he’s a wonderful person, who is eager to learn. ”

There is no doubt that Cisse wants to succeed at Atalanta. In other words, there is a lot of love between the pair. Cisse knows that he has to keep performing well in order to eventually get more game time.

Atalanta are in a real dogfight for next season’s Champions League qualification and cannot afford to slip up. Cisse showed that he is someone who can be relied upon in crunch situations. After all, that is what he has been down for many years now.