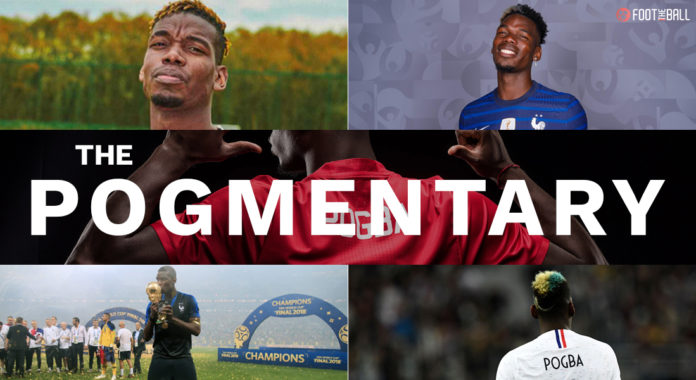 Paul Pogba has always been the man for the spotlight. Whether it be his on-field brilliance or his off-the-pitch antiques, Pogba consistently makes the headlines. His vibrant and cheerful personality makes him the centre of attention. His bizarre choices of dance moves and haircuts have although been criticised usually end up being the trend. Amazon Studios in fact are planning to make a documentary on Paul Pogba.

This is where he came from. This is what he's been through.#ThePogmentary, available NOW on Prime Video 📺 pic.twitter.com/x6jAPPcihJ

The World Cup winner has 43.5 million Instagram followers and nearly 8.5 million followers on Twitter. This vast fanbase that the French and Manchester United #6 has earned is a glimpse of the stardom that he possesses. Amazon Studios are precisely targeting this stardom that Pogba has developed over the years. Amazon Studios have announced the creation of a new fly-on-the-wall documentary about Pogba and the 28-year-old Frenchmen’s exploits on the pitch and his life off it.

The documentary on Paul Pogba dubbed by the producers as ‘Pogmentary’ is set to release next year and the shooting for the series will take place soon. Pogba has won the hearts of many youngsters due to his vibrant personality while also conjuring the criticism of many Football Pundits. This new documentary into his life will talk about the achievements and ambitions of the renowned footballer.

It will give a glimpse of the relationships between him and his teammates and the thresholds he has with his managers. The documentary will also bring to light the reactions of the player to the various criticism he faces on a day-to-day basis by Pundits like Hargreaves, Souness and Roy Kean.

Also read: Why Pogmentary is one of the biggest flops in recent history

Paul Pogba's 'The Pogmentary' has a rating of 1 out of 10 and is the worst-rated show on IMDb… 😬 pic.twitter.com/wHtHpWhZK7

The fascinating career of World Cup winner Pogba, who will leave Manchester United at the end of his contract in June, is set to be broadcast to the world in his ‘Pogmentary‘ series on Amazon Prime.

It will no doubt cover all aspects of his time at Old Trafford, as well as his spell in Turin with Juventus. But the Amazon Prime documentary will also cover his childhood in Paris, as well as his move to Manchester at 13 years old after breaking through at French club Le Havre.

Fans will be given unprecedented access to his life, both on and off the field, and Georgia Brown, who is head of European originals at Amazon Studios, says the documentary will give viewers more of a glimpse into Pogba‘s life away from football.

“Paul Pogba is one of the most prominent talents of his time, so we are thrilled to be collaborating with him with an overall deal and his series ‘The Pogmentary‘,” Brown said.

Pogba may not be everyone’s cup of tea but you can bet the masses will be tuning in to see this next year.

Amazon Prime’s Paul Pogba documentary will be available to stream on June 17, 2022.

News of the upcoming film series was initially publicised in April 2021, allowing a number of months for the producers to whet the appetites of football fans.

What an amazing night! Was such a good time!
Make sure you watch #ThePogmentary available now on @PrimeVideoFR 🎬
Love you guys ❤️ pic.twitter.com/MQ4sPOqVsL

The “POGMENTARY” series will be available to watch exclusively on Amazon Prime Video. New members can sign up for a free 30-day trial on the website.

WHAT TO EXPECT FROM THE DOCUMENTARY

Amazon’s recent success through documentaries like the ‘All or Nothing’ series that covered the Juventus, Manchester City, Tottenham Hotspur and Arsenal teams will give both fans and Pogba assurance. Amazon also has experience dwelling on the life of players when they filmed the life of Sergio Ramos in 2019. The Leeds United documentary ‘Take Us Home’ looking at the Yorkshire club’s Premier League promotion attempts under Marcelo Bielsa was released on Amazon Prime, while several other films are set to come out in recent months.