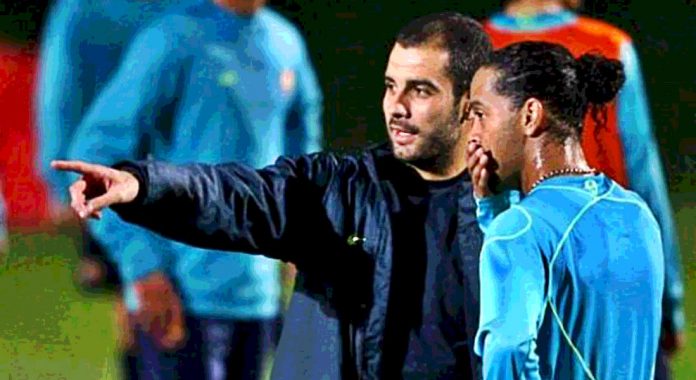 Pep Guardiola can be as successful at Manchester City as he was at Barcelona, according to Barca and Brazil legend Ronaldinho.

The Spaniard had moulded Barcelona into one of the superpowers in Europe with his ‘tiki taka’ style of football during his four-year spell with the Catalan giants.

He failed to clinch any silverware with Man City during his debut season in England but Ronaldinho believes it is only a matter of time.

“As a player, he was already playing with a very technical mind, so he was playing as a coach, thinking about everything like a coach,” he told the Mirror.

“So he has a deep ­knowledge of football.

“Wherever he goes, he understands much more than a normal coach. He ­understands the feeling on the field.

“I had the ­opportunity to play with the biggest coach in my career – that was Frank Rijkaard.

“But Guardiola’s style of ­arranging the team, passing the ball and the beautiful game that everybody likes to watch, means it would be a pleasure for any player to have the ­honour to play for him.

“I totally believe he will have a big part to play for City going forward. I love his style of playing. I truly believe that at City he will make a difference.”

Man City are now set to host Feyenoord in the Champions League on Tuesday.