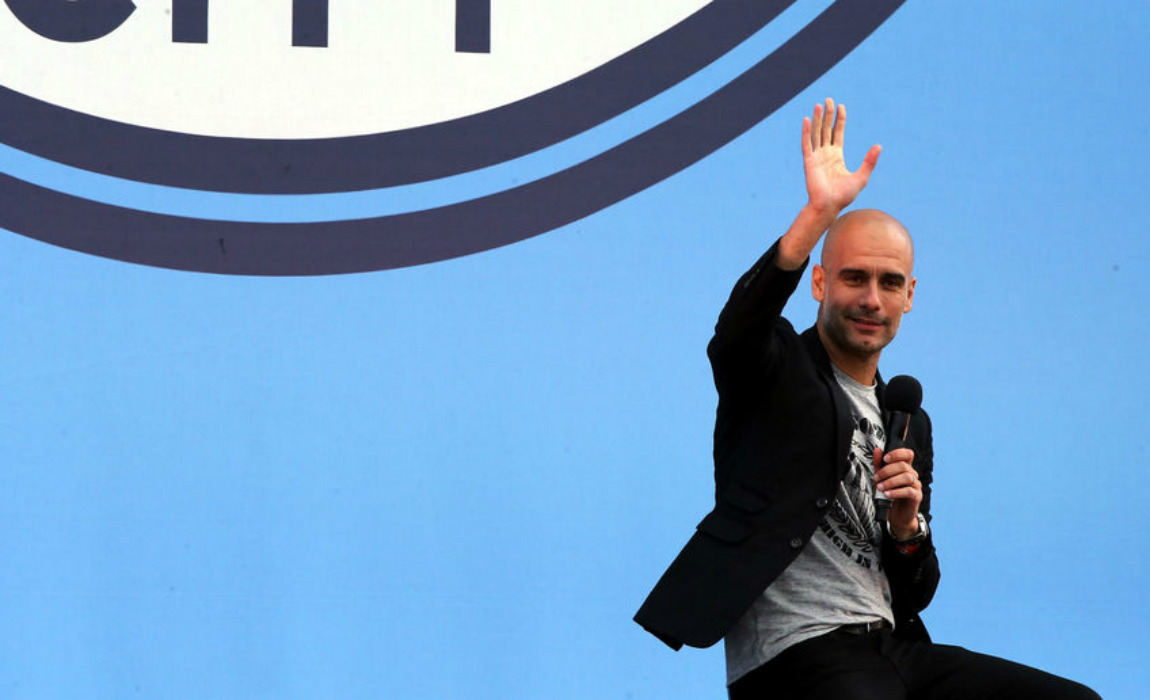 Manchester City’s biggest signing of the summer, new boss Pep Guardiola was unveiled in-front of much fanfare on Sunday.

The Spaniard was dressed in informal attire and looked to be in a rather jolly mood as he interacted with fans from the stage.

Around 7,000 fans turned up at Etihad Stadium to hear the what their new manager had to say.

The 46-year old was asked all sort of questions by journalists and fans and the former Barcelona manager did not shy away, as he answered all the questions, giving an insight of his plans for his new club.

A fan popped a question whether the new coach had plans to bring his former player Lionel Messi to Etihad to which the former Bayern Munich manager laughed before replying: “I’m sorry, Messi has to stay in Barcelona for the rest of his career.”

Pep also revlead that managing Manchester City is a ‘dream come true’, adding that he is excited to live in England and learn about English life and culture.

“My dream has come true,” he said. “The atmosphere is ‘wow, amazing’. I’ve come here to learn – the way people live here. I’m always curious to move around Europe.

“It’s my new house. Thank you for coming, I’m so glad to be here.

“I’m pretty sure I’m going to enjoy it.

“That’s why I’m here. I proved myself in Barcelona and then Germany. I want to prove myself here with the fantastic players and others who are coming.

“At the end we shall see, what I want after the games and seasons for our supporters to enjoy and be proud of what we did.

“Maybe we’ll achieve the titles. We need our fans. I cannot win alone. Without our fans it is impossible.

“Every manager in the world wants to improve their team. I have my way to see my job and how we play. I need time. We’re going to try and create team spirit.

“Our body language is the most important thing in the beginning.

“One of the reasons I decided to come here from Txiki and others that how well they are working with young players. They are imagining they can join us in the first team.

“We have one of the best facilities in the world.”

Guardiola comes to England after a fruitful 3-year domestic spell with German giants Bayern Munich whom he joined in 2013, and won 7 major trophies.

Previously Guardiola managed Barcelona, and his team has been dubbed by many as the greatest club team of all-time, where he ammased a staggering 14 trophies in a span of just 4 years.

The former Spanish international has earned accolades for his hands-on style management, something he promises to bring to Etihad with him.

“The first target is team spirit and play good. I know the players, I’ve played against them many many times. I know their quality but they have to show me and their fans,” he said.

“The past is the past. We are here to try again. My tactic is to develop the players.

“People don’t come to the Etihad to see how good the manager is – they come for the players. We have Jose, Klopp, Conte, Pochettino, Koeman. But we are just here to help.

“I don’t want the players to think what the club can do for them. We want a better club over the next four, five, six years.

“I cannot demand something of the players they cannot give me. I cannot talk about my players or the way we want to play if I don’t feel it.”

Pep Guardiola is being termed as a coup for the oil-rich Manchester City as the club embark on a new journey, looking to build a legacy, something their neighbours Manchester United have been taunting them about after their meteoric rise.

Though the new manager did have an awkward moment after what can only be called a slip of toungue as he went on to say “I have to know my players. Hug them – kick their a***! One of my dreams was to play here as a footballer. Now my dream has come true.”

.@ManCity : “One of my dreams was to play here as a footballer.” pic.twitter.com/Zw3DUlwVEY

The statement got viral on social media as the former Barcelona star was trolled by fans of rivals club, some pointing out that during that phase City were playing in the third division.

‘Pep always dreamt of playing for CIty.’ Well when he was playing, City were playing second division. So don’t lie. #MCFC

Though for fans in England and around the globe, it will be a dream season, as Guardiola reignites his famous rivalry with old foe Jose Mourinho, who recently took charge at the sky-blues inter-city rivals Manchester United.

Unlike the last couple of years, the Manchester Derby is sure to be a hit, not just on the pitch, but also off it, as none of the prolific managers have ever shied out to take the verbal fights to each-other.