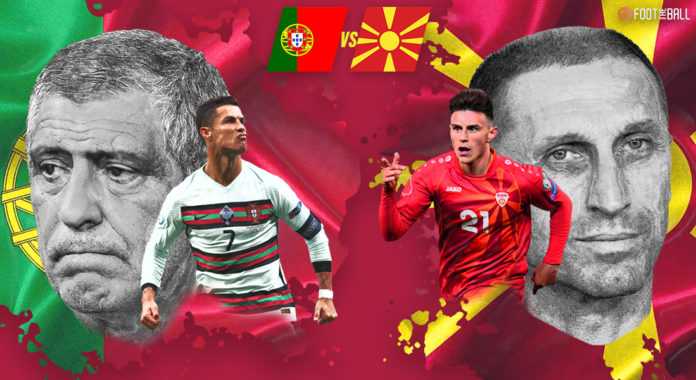 A spot at the 2022 World Cup finals will be at stake when Portugal and North Macedonia face each other at Estadio Do Dragao on Tuesday at a Path C play-off final.

The winner will book one of three remaining places at the 2022 tournament in Qatar, with the World Cup draw due to take place on Friday 1 April. A Selecao defeated Turkey 3-1 in the semis, but it has to be noted that Stefan Kuntz’s troops failed to score the equalizer from the penalty spot.

Portugal are seen as hot favourites to win the decider, but Cristiano Ronaldo and Co. will have to prove their worth on the field.

Serbia denied Portugal top spot in Group A with a last-day 2-1 win in Lisbon. Fernando Santos’s side then beat Turkey 3-1 in the play-offs. North Macedonia edged out Romania to finish second behind Germany in Group J. They beat the Germans 2-1 in Duisburg in qualifying then pulled off an even bigger shock by eliminating Italy in the play-off semis.

Throughout the group stage of qualifying, North Macedonia conceded only 11 goals in 10 games, with 7 of those coming in 2 games against Romania and Germany. The other 4 goals came across 3 games, meaning North Macedonia kept a clean sheet in half their group stage games, which in a group with the aforementioned Germany and Romania as well as Iceland and Armenia, is quite the accomplishment to say the least.

Portugal are favourites again, but will be mindful of how they rode their luck against Turkey as they face another side who will line up to defend. The returns of João Cancelo and Renato Sanches from suspension and Pepe from illness should ease Fernando Santos’s defensive concerns, and with Bernardo Silva in a free role, and Cristiano Ronaldo and Diogo Jota as menacing as ever, Portugal know how to dominate games.

The Macedonians, on the other hand, did well to shock Italy in Palermo to set up a meeting with Portugal. However, we do not believe that Blagoja Milevski’s men are capable of making yet another major scalp as A Selecao are a real force to be reckoned with at home. Both Elmas and Kostadinov return from suspension, speaking of the away side.

North Macedonia’s defensive record in the qualifiers bodes well against a Portuguese side who have struggled to find consistency at times during World Cup qualification. With a draw and a loss to Serbia, and a draw and a 2-1 win against Ireland that only came about through 2 Ronaldo goals in the 89th and 96th minutes, Portugal have yet to click into 2nd gear.

Their opponents have quite the stakes too, it must be said. This is likely the last World Cup opportunity for Cristiano Ronaldo, and Portugal haven’t missed the World Cup since 1998. It would be a great shock to the Portuguese to miss out on qualification, potentially a bit more so than the shock that Italy received from this team.

North Macedonian players woke up Friday morning to find that no, it’s not a dream, they really pulled off potentially the greatest upset in World Cup Qualifying in a generation. If you didn’t see it, in the 92nd minute of their semifinal against Italy, North Macedonia got a sensational goal from Aleksandar Trajkovski to bring them to within one game of a spot in Qatar this winter for the World Cup.

Trajkovski’s strike is the kind that’s written in national folklore but, as mentioned, North Macedonia’s job is not done yet. Celebrations must be short because Tuesday they face another mammoth task, needing to earn their trip to Qatar by beating Cristiano Ronaldo’s Portugal. They will be written off much the same as against Italy, but don’t count out the North Macedonians yet.

For a country who has never made it to the World Cup finals, they sure don’t play like it. Blagoja Milevski’s team play with no fear at all, against anyone, and it’s shown throughout both World Cup qualification and the Euros.

A night to remember 🤯

Milevski has made clear to his team what lies ahead if they play well, and that message has clearly gotten through to his players. International competition is often shaped by which staffs can get their players to buy in the most, rather than pure talent like is often the case on the club side of things.

Condsidering the stakes of this match, both teams will be cautious enough and hesitant to go all out against each other. FootTheBall predicts Portugal 1-1 North Macedonia, with Ronaldo and Portugal winning on penalties.