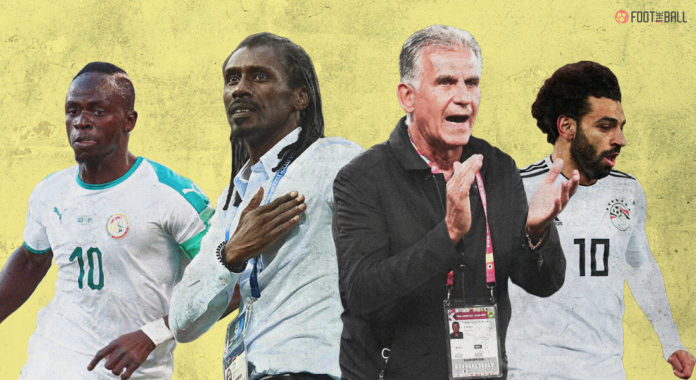 The second-leg of the World Cup qualifier heads to the land of the African champions. Senegal need to score in order to keep their hopes alive as Egypt are in the driver’s seat.

The Lions of Teranga had a tough night in Cairo. Going behind early due to an unfortunate own goal from Saliou Ciss’ own goal. They were never really able to muster an effective response despite boasting 56% possession. Sadio Mane was kept quiet by the Egyptian defence again as was the case in the AFCON final.

Egypt take an early 1-0 lead through a Senegal own goal pic.twitter.com/gIQMDw5kJb

The rest of the attack sputtered in their star’s shadow. They could only manage three shots on target, none of which were threatening enough. Aliou Cisse knows that he has to get his frontline on the ball more and more if they are to break down a compact defence. Senegal will hope that the comfort of their home settings will be able to help them go through.

Egypt’s win could be seen as revenge for their heartbreak early last month. Mo Salah had a solid outing after shaking off injury concerns. It was his shot that Edouard Mendy saved and bounced off of Ciss for the only goal. The slender lead could be crucial in a hostile environment against an opponent who often get the better of Egypt.

The Pharaohs’ main asset is their vaunted defence which is incredibly hard to break down. Carlos Queiroz knows that he will have to rely on Salah and the backline once again. Given that the away rules are valid, Egypt can go through even with a 1-1 draw. It is a great chance for the nation to get back to the World Cup as things stand currently.

Senegal can start with Ahmadou Dieng in place of Famara Diedhiou in attack.

Egypt have no injury worries and should be fielding the same players.

Sadio Mane is the undisputed star for Senegal and the most effective impact player in the team. His quietness in the first-leg was evident as the team struggled to create anything. Mane was a menace at the AFCON with three goals and two assists. Mane is a very clever operator who can run quick with the ball.

This is one of his favourite fixtures. 🍿 pic.twitter.com/LzYyAL3n9W

Egypt’s defence is notoriously hard to break down and Mane will need to be in top form. He will need help from Sarr and Dieng along with the wingbacks. Senegal know that they have to score at least once with Mane their best bet.

Mo Salah has been the best player for Egypt since his debut. It was his run and shot that created the opportunity for the own goal. Salah has been carrying Egypt and will hope that he can deliver once again. Given how the opposition studies him in detail, it is still so difficult to stop Salah.

It’s advantage Egypt as they win their World Cup qualifier clash against Senegal 1-0, courtesy of a Saliou Ciss own goal in the 4th-minute. pic.twitter.com/iPIEk6XzOF

The midfield can supply balls in behind the defence and Salah’s speed will do the rest. Moreover, Salah has extremely sharp passing and can set his teammates up like he did in the AFCON semis. With 30 goal contributions in the Premier League already, Salah can the creative force that takes Egypt to the World Cup.

The game is finely poised with Egypt holding a very slight advantage from home. Senegal at home is a formidable challenge. However, the away goals rule could be the spoiler. Senegal will be desperate for a clean sheet as even one goal for Egypt will mean the home side needing three. FootTheBall predicts a 1-1 draw between the two African giants, meaning Egypt go through.