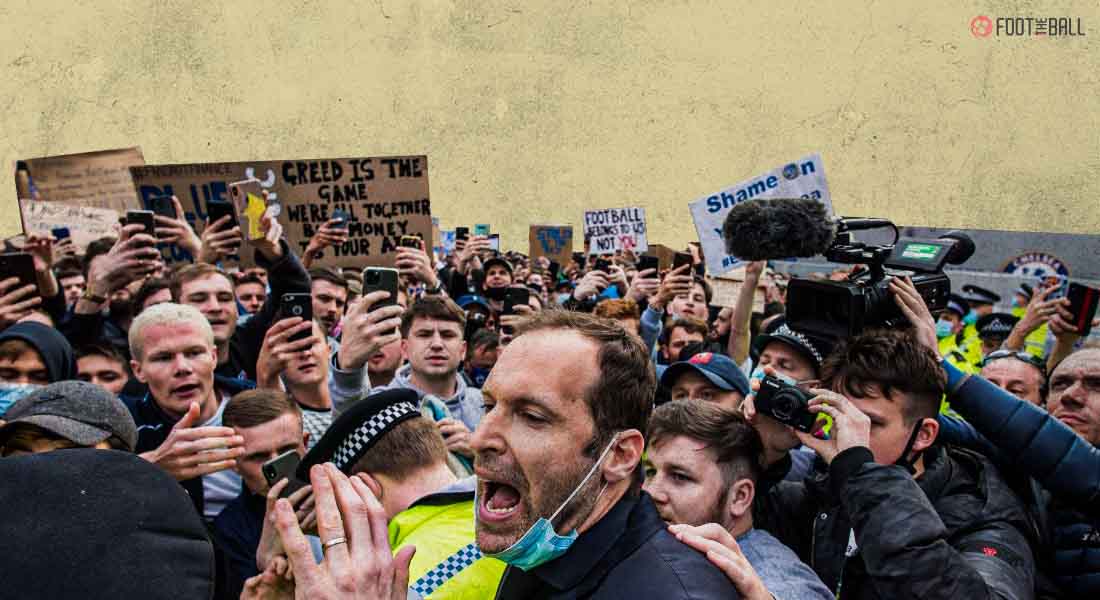 The world of football has just been through and is still going through turmoil. A plan was devised that united football fans and football clubs.

The news broke just as a Fulham and Arsenal match was about to take place. Social media and news outlets were awash with the announcement of an intended Super League.  We can preface the rest by saying that the teams known now as the rebellious six are still in the Prem – so all of the big matches you want to see will be taking place.

Although it was announced that the Premier League had stripped the big six club chiefs of their positions on the committee after the plans were announced.  Since the fallout, they have withdrawn their pledges to take part in the Super League.

WHO ARE THE REBELLIOUS SIX?

The rebellious six and the big six are one and the same:

Currently, there is expected to be a range of repercussions for those clubs. Pressure is being placed on Chelsea chairman Bruce Buck to give up his position on the Premier League’s nominations and remunerations committee. He isn’t the only one facing pressure; Arsenal Chief Executive Vinai Venkatesham has been removed from the Club Strategic Advisory.

WHY WAS THE PREMIER LEAGUE FORMED?

It is the hardest league in the world to predict, while these tipsters point towards glory for Manchester City, they were 18 points off the pace last season. That’s how quickly things can change.

World-renowned footballers train and perform their best in every match to hit the pitch in a Premier League match. Since the matches are fierce, and the opportunity to play in the Premier League is a hardwon privilege. Only the best of the best get the chance.

Those big names in football draw huge crowds and increase the viewership. The higher the viewership, the more the Premiership makes and can distribute. The Premier League is a football phenomenon. Managing to capture the support of fans globally, and teams too.

Celebrating over 70 nationalities on the pitch, it is a far cry from where it started. In 1992 there were only 11 non-British footballers in the Premier League.  The Premier League also produced the Elite Player Performance Plan.

WHAT IS THE EPPP?

The Elite Player Performance Plan is dedicated to putting resources into developing home-grown players. The youth development scheme allows for the free up movement of skill players. It has a range of principles and goals that keep the program on track.

David Dein is the man that is responsible for creating The Premier League, and it has been one of the most transformational moments in football history.

WHAT IS THE SUPER LEAGUE?

The concept of a super league has been around for a while. It takes the most famous clubs and players and delivers a tournament of its own. Although it wasn’t fully decided, it was reported that only 20 teams would play, and 15+ of those would be founding teams. Effectively closing the competition to every other football team.

The key difference between the Champions League and the Super League (since they sound similar), is that the roster for the ESL would never change. Regardless of performance from other teams, or those within the members.

The Super League stopped before it started. But this is the timeline between it being breaking news and it breaking the internet.

Sunday 1 pm BST: the news broke that 12 clubs from Italy, Spain, and England had agreed to take part in what they were calling The Super League. UEFA wasn’t happy with the news, and as more detail emerged, the bigger the ramifications.

Sunday 4 pm BST: The Premier League condemned the plans. UEFA, English, Spanish and Italian football governing bodies said they would use all possible measures to stop the project.

Gary Neville was quoted as saying that it was pure greed. He also went on to call for point docking and financial implications.
Sunday 11 pm BST: The Super League comes out with the official announcement of the 12 clubs that had signed up:

FIFA was now involved and also stood against the plans.

Monday 7.30 am BST: The ESL took legal action to prevent FIFA and UEFA from blocking their formation. Within the same hour, Machester United exec vice-chairman and Manchester City chief exec stood down from their roles.

All 12 clubs resigned from the ECA.

Monday 11.40 am BST: Players began to speak out against the ESL. Ander Herrera is quoted as saying that this was the rich stealing what the people created.

Monday 2 pm BST: The UEFA president said that this move was a spit in the face of football lovers. The timing was unfortunate, and UEFA was also announcing the new format for the Champions League (starting in 2024).
Monday 7 pm BST: A protest was staged by fans at Elland Road. A Liverpool shirt burning sent a clear message to decision-makers that fans weren’t happy.  By 11 pm on Monday, David Beckham had spoken out saying that football is “nothing without the fans”.

Tuesday 6 am BST: Florentino Perez (Real president and the first ESL Chairman) stated that they made the move to save football and that young people aren’t interested in football anymore.

This Florentino Pérez interview is baffling.

These people are awful for the game.

At midday, Politics and football held hands. Boris Johnson met with the Football Association, Premier League and fan groups. He supported their efforts to halt the Super League. The clubs who have not been included in the first 12 all stood against the plans.

Tuesday 10.45 pm BST: Six of the Prem teams announced that they were withdrawing from the ESL.
Wednesday 10 am BST: The ESL founder, and Juventus chairman Andrea Agnelli admitted that it was unlikely the project that rocked the football world could still happen.

Within 36 hours from the announcement, the idea for the Super League was crushed. It wasn’t just clubs that stood against the plans. Fans were quick to ridicule the plans too.

WHERE DID THE SUPER LEAGUE GO WRONG?

The Premier League was created for the betterment of players and to bring football to the world stage. Opening up the game for players across the globe.  The premise of the ESL took away much of the sportsmanship of the game and turned it into something that is hyper-exclusive.

Football is a grass-roots game, and the ESL threatened everything it stood for. This is why the Premier League formation was so different and ultimately a success.