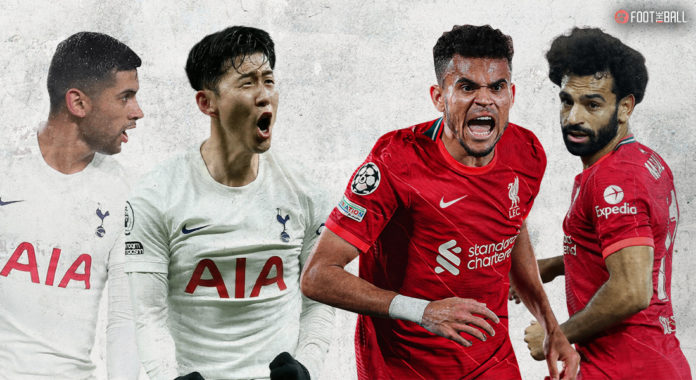 Tottenham Hotspur dealt a major blow to Jurgen Klopp’s Liverpool in their quest for the Premier League title as they held them to a 1-1 draw at Anfield on Saturday night. Heung Min-Son opened the scoring early in the second half while Luis Diaz got the equaliser late on to save a point for the Reds.

Liverpool came into the match chasing Manchester City and their start showed that they meant business. Their intensity in the opening 10 minutes blew away the visitors who looked like deer caught in the headlights, unable to get out of the inevitable Liverpool truck heading their way.

Luis Diaz and Andy Robertson were particularly quick off the blocks and created dangerous openings but Spurs kept getting a foot in here and there to disrupt their attacks. Antonio Conte’s men did look dangerous at times on the counter-attack with Harry Kane, Heung Min-Son and Dejan Kulusevski. One such counter brought the game’s first shot on target form Rodrigo Bentancur, which was straight at Alisson.

Jordan Henderson did very well to block a Kane shot on the volley while Virgil van Dijk should have done better at the other, heading wide from a good Robertson delivery. It wasn’t until the 28th minute that Hugo Lloris was tested, albeit by his own teammate. The Frenchman did well to tip away Ryan Sessegnon’s poor header with Mo Salah lurking at the back post.

The game had a bit of a lull before sparking back into life in the final few minutes. Van Dijk again showed his strength from set-pieces and was found free by Trent Alexander-Arnold from another corner. His attempt this time was much better but he was unable to get over it enough and saw it come back off the crossbar.

Diaz then tested Lloris from range after a neat one-two with Sadio Mane. His curling shot was well parried away from danger by the Spurs captain. A minute later Pierre Emile-Hojbjerg let go from 25 yards as well. The Dane beat Alisson in the Liverpool goal but his shot hit the right post instead.

It was a frenetic first half that perhaps deserved a goal but both sides went into the break with things to improve upon. The Reds came back with the same vigour and put Spurs on the back foot immediately. Thiago continued to pull the strings but Tottenham’s defending in the box remained solid.

10 minutes into the half though it was Spurs who took the lead with a very well-worked goal. Emerson’s high ball was brought down brilliantly by Kane who made his way forward before finding Ryan Sessegnon free in the box. The youngster did brilliantly to maintain his composure and square the ball to Son to tap in.

The goal gave Spurs the impetus and spaces opened up for them as Liverpool chased the game, and the title with it. Sessegnon and Son combined again dangerously but were unable to convert and Kulusevski shot straight at Alisson from distance soon after the goal.

Liverpool became increasingly desperate for the goal that just wouldn’t come and the game got a bit cagey. Substitute Kostas Tsimikas and Sessegnon got a yellow card each in quick succession.

The home side looked like they would need a bit of luck and it came in the form of a deflection that gave them the equaliser. Midweek hero Diaz once again was the game-changer, dropping a shoulder to create space for himself and shooting from range. His attempt hit Bentancur and flew into the back of the net with Lloris wrong-footed.

Neither side wanted to settle for a draw and the game was end-to-end in the final few minutes. Clear-cut chances were still few and far between and it was Hojbjerg who had the best opportunity to get the winner in injury time when the midfielder was found in the box by a deep cross from Harry Winks. He tried to head it across to Kane when going for goal would have been a better opportunity.

Liverpool piled on in the end but to no avail and could only rescue a point. Here are our key takeaways from the match –

The winter signing of Luis Diaz was expected to be a long-term move, part of the eventual replacement of the Salah-Firmino-Mane trifecta. However, it has proved to be another masterstroke from Liverpool’s recruitment team with the Colombian fitting in seamlessly into Klopp’s machine.

He was the difference in Villarreal in the second-leg of the Champions League semifinal and was once again the best player for Liverpool at Anfield on Saturday. Diaz’s directness and confidence make him a very difficult customer and under Klopp, he is living up to the potential he showed in Portugal.

When Antonio Conte took over at Tottenham, they were well off top four and the season was looking like a write-off. The Italian though has managed to turn it around with expertise, and the Lilywhites are just one point away from Champions League qualification.

More than the points, it is their level of performance which has enthused Spurs fans. They might have been conservative but they went toe-to-toe with Liverpool and put in a shift to be proud of. Even if they do not get top four this season, they will be a force to reckon with in 2022-23.

Liverpool did go top with the draw on goal difference but Manchester City have a game in hand when they play Newcastle tomorrow. City’s Champions League exit also means that they can dedicate all of their efforts and resources into the Premier League campaign.

Liverpool’s title hopes took a major dent but stranger things have happened. It is unlikely that they will take their foot off the pedal but with two major cup finals looming and City ruthless as ever, it feels like the quadruple dream might just be over for this season.