THE TALKING POINTS AS PREM HITS A BREAK 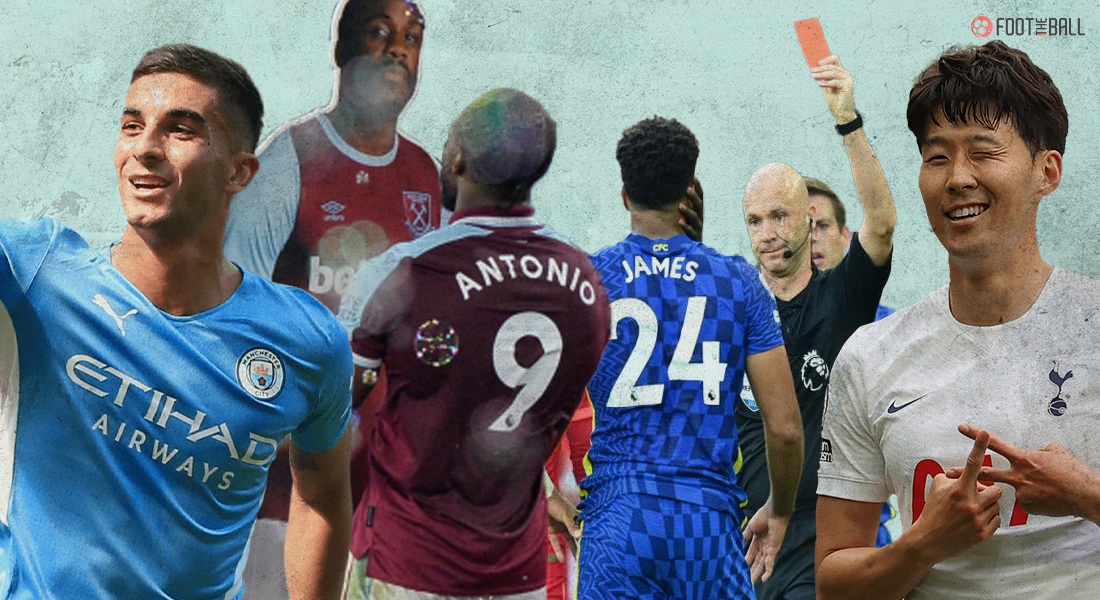 Manchester City romped a ten-man Arsenal 5-0 at the Etihad. The Gunners have fallen a long way beyond the elite and are in need of some major changes. Elsewhere, City’s local rivals Manchester United scraped a 1-0 win past an unlucky Wolves, who are now winless in three games. Fellow title rivals, Liverpool and Chelsea played out a 1-1 draw, hence dropping points.

Rate your team's Matchweek 3 from 1️⃣ to 🔟 pic.twitter.com/uU3KNhvXY7

Tottenham meanwhile stormed to the top of the table after three successive 1-0 victories. Michail Antonio’s sensational performance wasn’t enough to secure a win for West Ham against Crystal Palace. Everton are on the rise again as they beat Brighton 2-0. Ivan Toney’s first goal in the Premier League earned Brentford a deserved point against Aston Villa.

So what are the five things we learned from Premier League matchday three?

It took three matchdays to arrive but the inevitable finally happened. The VAR struck in the season playing a key role in determining two blockbuster matches. Liverpool welcomed Chelsea to Anfield on a bright Saturday evening. The game was already a title credential test despite the nascency of the season.

After an even start, Chelsea took the lead midway through the first half through a sensational looping header from Kai Havertz. Liverpool were trying desperately to equalize before halftime and saw an effort from Sadio Mane blocked on the line by Reece James. The Liverpool players appealed instantly for a penalty claiming handball. Anthony Taylor went to the pitchside monitor and saw James blocked the ball with his hand deliberately and awarded a penalty to Liverpool and a red card to a stunned James.

Controversy arose from the decision as the ball hit James’ thigh first before hitting his arm. The red card divided opinions but Mohamed Salah could not have asked for more as he slammed home from the spot. The game got turned into attack vs defence in the second half as Chelsea put on a defensive masterclass to escape Anfield with a point and a man down.

A similar controversy surrounded Manchester United’s winner against Wolves. In the build-up to Mason Greenwood’s strike, Paul Pogba was involved in a 50-50 with Ruben Neves. Pogba’s challenge caught Neves and the Portuguese midfielder went down. Despite Wolves’ protest, the play went on and Greenwood scored the winner. After lengthy VAR checks, Mike Dean adjudged there was no foul play and the goal stood. Neves was fuming after the match and the pundits feasted on divided opinions. United set up a new unbeaten away record in the league.

An air of emotion surrounded the Etihad stadium as the defending champions welcomed Arsenal for an early kickoff on Saturday. Earlier in the day, they unveiled statues of club legends Vincent Kompany and David Silva to honour their legacy. City went into the game without a proper striker. In a bid to replace Sergio Aguero, they bit the dust twice as Harry Kane and Cristiano Ronaldo got away.

Pep Guardiola already pulled off a heist last season without a striker. By the looks of it, he has to do it once again this season. Pep used Lionel Messi as a false nine to create wonders at Barcelona. He needed to repeat this miracle. He found a new path by shuffling his deck. Gabriel Jesus, a centre forward was converted to a right-winger. Ferran Torres, a winger by trade was made a centre forward. The 21-year-old is playing like a natural striker with great movement in the box along with instinctive finishing. He scored two goals against on the evening as City put Arsenal to the sword.

Arsenal is off to the worst start in its 128-year history after a 5-0 loss to Manchester City on Saturday https://t.co/z13gnZq1nQ

Mikel Arteta was under immense pressure after a horrible start to the season. His misery only piled up when he returned to the Etihad. Arsenal started on the front foot only to be down by two goals by the end of the first quarter. Granit Xhaka’s studs-up challenge earned a red and the game was effectively over there. City added three more goals after that and it could’ve been more if not for some erratic finishing.

Arsenal are now the only team not to score in the league till now and the sack threat on Arteta is hanging more than ever. The international break came at the right time for the Gunners as they look to recover.

Three games, three 1-0 wins. The Lilywhites know how to get the job done this time. Nuno Espirito Santo made a superb start to life at Tottenham Hotspurs. Defying all expectations he led Spurs to the top of the table after three games. Nuno adopted a 4-2-3-1 straying away from his favoured three at the back system. He built the team right from the back with a gem in Japhet Tanganga. The youngster unearthed by Mourinho is showing his quality this season. After overcoming injuries, he had a splendid opener against Manchester City as Spurs ran out 1-0 winners through Son Heung Min’s winner.

Dele Alli looks a refreshed man as he is playing in a new, energetic role in midfield. He scored from the spot against the Wolves to give them their second win of the season. After all the drama surrounding his future, Harry Kane has decided to stay at Tottenham to the delight of Tottenham fans. He made an appearance off the bench against Wolves.

Against Watford on Sunday, Kane started his first game of the season for Spurs in the league. The English international continued his linkup brilliance with Son. Son scored the winner late in the first half as his free-kick went all the way as no player or the keeper got a touch on it. Spurs defended solidly to see out the game to storm to the top of the table.

For the first time in our history…

The squad will only get better as Cristian Romero, the Serie-A defender of the year builds up to Premier League speed. Kane would also get back to his best. If youngsters like Oliver Skipp and Bryan Gil perform well, Tottenham are in for a wonderful season under Nuno.

Michail Antonio is the man of the moment now. The wing-back turned striker can not do anything wrong at the moment. Everything he touches turns to goals or assists. He currently leads the chart for goals scored (4) and trails Paul Pogba in the assists chart by only two (3). This form isn’t a coincidence by any means as Antonio has been sensational since the restart in 2020. Under David Moyes, he has turned into a clinical centre-forward making use of his pace, physicality and lethal finishing. He became West Ham’s all-time highest goal scorer after a brace against Leicester City.

I LOVE FOOTBALL, I LOVE SCORING GOALS, I LOVE MAKING HISTORY, I LOVE THIS TEAM AND I LOVE EVERYONE WHO HELPED ME GET TO WHERE I AM TODAY 🙌🏾⚽️⚒ #49NotOut pic.twitter.com/OJLndy26MV

Antonio put in another brilliant performance for the Hammers as they were held by Crystal Palace. Antonio assisted Pablo Fornals for their opener with his slick passing. They were pegged back by Conor Gallagher’s equalizer which marked Crystal Palace’s first goal in the Patrick Vieira era. Antonio then scored his first goal of the match to give them the lead again only for Gallagher to equalize. The game ended 2-2 as the Hammers dropped their first points of the season.

The Hammers look a formidable outfit apart from Antonio too. Said Benrahma hit his Brentford form for them and Pablo Fornals looks lively too. With Kurt Zouma signed and talk of a loan return of Jesse Lingard, David Moyes’ side looks a real deal. A deep run into the Europa League and an assault on the top four wouldn’t look impossible if they continue their early season form.

Brentford are unbeaten in the league after three game-weeks. The Bees buzzing from Championship are a competent attacking outfit and a pressing side. They are also astute defensively and shocked Arsenal in their first game in the Premier League. They held Crystal Palace to a goalless draw in their second meeting.

🐝 @BrentfordFC are the first newly promoted #PL side to avoid defeat in their first 3 matches of the season since Huddersfield in 2017/18#AVLBRE pic.twitter.com/FTs7p0th1l

They visited Villa Park to take on last season’s surprise packages Aston Villa. The free-spending Villans had a mixed start to their campaign and were stunned by Brentford again. Ivan Toney, Championship’s best striker opened his Premier League account. Though Villa struck back later through Emiliano Buendia who was in fact the MVP of the Championship. The Bees now have five points out of a possible nine and are one to watch out for in the future.

Their fellow promotion candidates Norwich are in a much worse situation. The Canaries had the toughest possible opening fixtures and lost all three of them. Liverpool and Manchester City dispatched them cleanly and Leicester City bested them at Carrow Road. They next face a winless Arsenal in a bottom of the table clash. Leicester recovered well from a jolting loss at West Ham.

Also, there was an entertaining 2-2 draw at Saint James’ Park. A James Ward Prowse penalty deep into the stoppage time prevented Newcastle from picking their first win of the season. Burnley and Leeds too frustrated each other with a 1-1 draw while looking for a first win. Everton ran out comfortable winners against Brighton with goals from Dominic Calvert Lewin and Demarai Gray.