ARRIVAL OF THE AUSTRIAN ACE 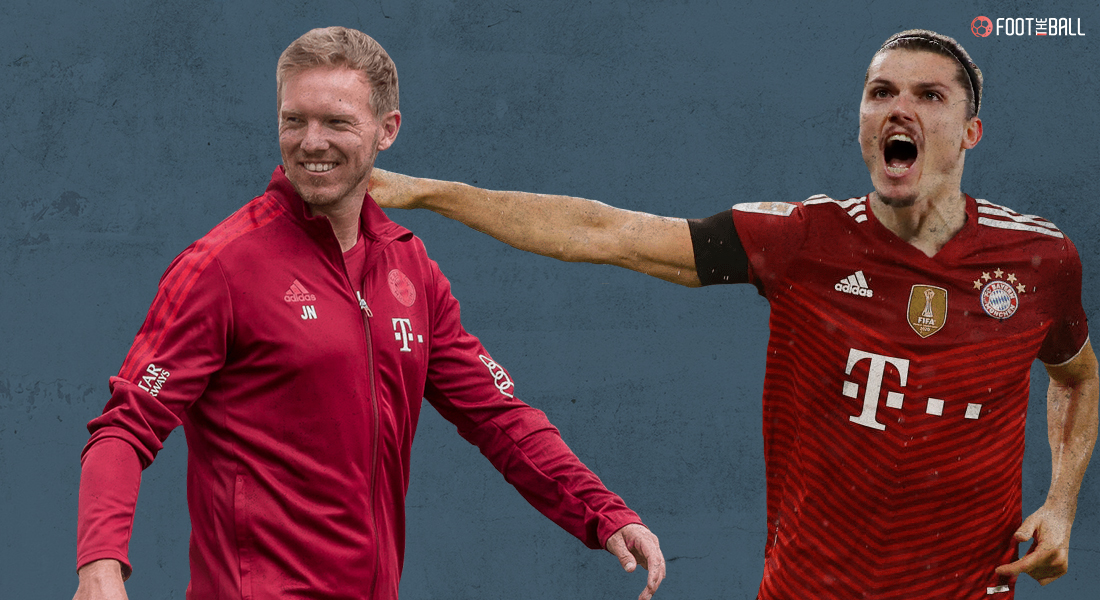 Bayern Munich have completed the signing of Marcel Sabitzer from rivals RB Leipzig. The 27-year-old Austrian playmaker becomes the second player from Die Roten Bullen to join the defending champions this summer.

After tying down the futures of two of their senior pros in Joshua Kimmich and Leon Goretzka, this represents another significant move for the Bavarians. Under new manager Julian Nagelsmann, who managed Sabitzer for a long time, the team has suffered a bit of a shaky start in the league.

As previously reported, Leon Goretzka is 100% staying at FC Bayern in the long term. No exact schedule for the announcement yet, but it is done. New contract could even be until 2026, one year longer than Kimmich's [Podcast Meine Bayern-Woche, @Plettigoal] pic.twitter.com/cD5diOQxPx

Sabitzer brings in a wealth of experience at the top-flight level and will also serve as a great mentor to the youngsters. Nagelsmann will be hoping that this addition will provide more stability to the team going forward, both literally and metaphorically.

Sabitzer is a solid attacking midfielder who has the versatility to roam all around the central midfield positions. He racked up 14 goal contributions (nine goals, five assists) in all contributions last season. That was just a continuation of his form from 2019-20 where he had 13 goals and 10 assists.

16m? I'd probably accept that if I was the sugary drink maker.

I am never quite sure what to make of players from RB because they played such a weird system last year pic.twitter.com/dPVtdju8dU

Alongside the likes of Emil Forsberg and Kevin Kampl, he was a linchpin in the centre and also captains the side. Leipzig have become a domestic powerhouse and Champions League regulars thanks in no small part to him. They also made the final of the DFB-Pokal last term.

Aside from his immense value to Leipzig, Sabitzer is also a regular with the national team, having already crossed 50 appearances. Bayern will be hoping that he is able to take Jamal Musiala under his wings as Sabitzer will certainly become a starter in the team.

The pandemic-affected finances had already curtailed any hopes of a massive outlay but Bayern still managed some good bits of business. At €16m, Sabitzer is an incredible piece of business for Bayern.

Such an impressive passer of the ball. 🎯 pic.twitter.com/8JUFvbdfb2

In a market where Martin Odegaard went for 35m and Jack Grealish for 100m, getting a proven midfield dynamo who loves to get forward constitutes a shrewd piece of business for the club.

Though it was certainly helped by Sabitzer’s insistence on joining Bayern, the fact that his contract was set to run out next year meant Leipzig were keen to get some transfer fee by selling this summer.

Nevertheless, the fact that the price did not even touch 20m for a player of his age and calibre is surprising. There was little competition or excitement regarding Sabitzer from clubs abroad, which only strengthened the Bavarians’ cause. This is quite a coup given he will most likely outperform his fee with his new team who are on the hunt for a 10th consecutive domestic title along with more silverware.

Nagelsmann has been using a 4-2-3-1 formation with Muller, Musiala, Sane, Gnabry, Coman fighting for the places behind Lewandowski. Now with the arrival of Sabitzer, he looks odds-on to become one of the regulars in the starting 11 after he returns from his injury.

He is one of the most dangerous players going forward as evidenced by his 2.45 shots P90 last season that put him in the top 98 percentile across Europe for players of his position.

Similarly, his 7.19 progressive carries P90 had him in the top 95 percentile. Given how he loves to roam free in the midfield, Sabitzer is almost imperious in his passing during most of his matches.

Marcel Sabitzer: Man of the Match vs Schalke

Over the past three seasons, he has a pass completion of 85% for short passes along with 80% of his medium passes. Furthermore, he is an extremely involved player when his team is on the front foot with 2.62 shot-creating actions last term, as well as 3.34 progressive passes, received (both P90).

Marcel Sabitzer has been directly involved in 7 Champions League goals this season [4⚽️ 3🅰️], more than any other RB Leipzig player.

He has averaged a goal or assist every 102 minutes on average. 🇦🇹 pic.twitter.com/5Jh3RV7XqR

Though he is not likely to be the furthest midfielder in attack, there is little doubt that the Austrian will be relied upon to move the ball quickly. Coming to the defensive workrate of Sabitzer, he is an efficient tackler with 109 out of his 153 tackles across the past four campaigns leading to his side regaining possession.

He is also known to apply pressures adequately with most of it coming in midfield though he also tracks back when required.

Here is Flicks 20/21 title winning season with Goretzka and Kimmich, who are so close I now know why there are so many fanfics about them. pic.twitter.com/slAZKD4sUQ

With a 63% dribble success rate over the last three seasons, Sabitzer is not shy of carrying the ball at the opponents. This can integrate really well in Bayern as Kimmich and Goretzka are excellent passers of the ball themselves. Though he will not be expected to do the heavy lifting in this regard, it always helps to have an extremely mobile player who can cover quickly.

Muller is an unshakable part of Bayern’s DNA and he will continue to be so. Given Sane’s inconsistent play at times and Musiala’s young age, Sabitzer will be slotting right alongside Muller. He will be a much more mature and stable option in the midfield, and given how Nagelsmann has worked with him over the years, only bodes well.

What an unbelievable footballer Marcel Sabitzer is. Inch-perfect placement and timing on his passes for both of the goals, and on top of that, he'll cover every single blade of grass in every match. One of the most underrated midfielders in Europe.

Moreover, the way he was easily signed and the way his manager knows his game further reinforce Bayern’s position as the team to beat in the Bundesliga.