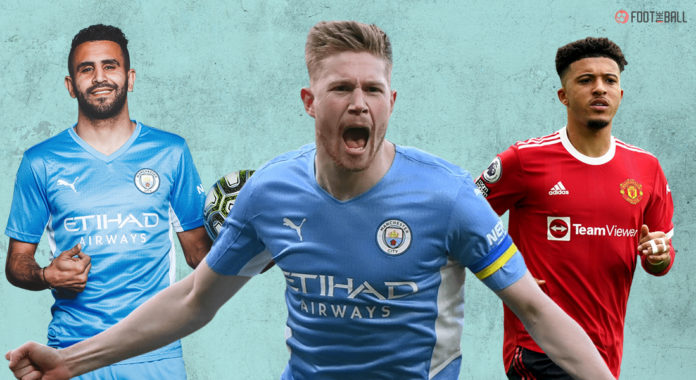 The Manchester Derby in its full glory. City were looking to pull away from Liverpool while United were aiming for fourth-place.

It was the home side that got off to a perfect start. Bernardo Silva’s low cross evaded everyone before reaching Kevin De Bruyne. The Belgian side-footed home with his left foot to give the lead within five minutes. Fred had a good chance to equalise minutes later but Ederson was quick to come out and smother the chance.

The leveler did indeed come from an old City graduate. A counterattack through the middle saw Paul Pogba swing the ball to the left for Jadon Sancho. The winger cut inside before curling a wonderful strike past the despairing dive of Ederson. Phil Foden had an awkward header looped onto the crossbar as the game remained stretched.

Jadon Sancho has just scored his first Manchester United goal away from Old Trafford since 28 November, when he netted his side's only goal in a 1:1 draw against Chelsea at Stamford Bridge.

It just had to be him against Manchester City. 💫#MCIMUN pic.twitter.com/11a0oVeC1A

City retook the lead just before the half-hour mark. Foden flicked the ball past Victor Lindelof and shot straight at David De Gea. The rebound fell to Silva whose attempt was blocked by Harry Maguire. The ball then ricocheted off Alex Telles to land at De Bruyne’s feet who hammered it home.

Majestic play by @PhilFoden as he almost single handedly scores a wonder goal by himself – the effort rebounded to @JackGrealish and then rebounded again to @DeBruyneKev who couldn't miss!! 👌

City were on top, Riyad Mahrez producing a fine low save from De Gea as halftime approached. There were to be no more goals with City leading 2-1.

The game settled down after the break with both teams jockeying for possession. City were still looking the likelier scorer given their hold of the ball. United were yet to test Ederson as the game entered the final 25 minutes.

⏱ An hour on the clock in Manchester. #MUFC | #MCIMUN pic.twitter.com/37L8SSbC6R

The third goal did indeed come and what a beauty it was. De Bruyne’s corner was volleyed into the net by Mahrez on the half volley to give a two-goal lead. Joao Cancelo went close with a scissor kick that De Gea saved before the final goal came in injury time. Mahrez smashed his effort off of De Gea but it was initially ruled out for offside. However, a VAR check overturned the linesman’s call as City won in style.

And just like that he has a second. 😀 https://t.co/1jMTZlHBsi

Classy City get it done

It was never in too much doubt and that was proved within five minutes. De Bruyne had a wonderful match, scoring twice and assisting once. Foden ran the central defenders ragged, while Mahrez’s goals were the icing on the cake. There were a few hiccups in the early exchanges defensively but they recovered brilliantly.

Pep Guardiola knew that all they had to do was stifle the United attack, which was easier with no Cristiano Ronaldo. Jack Grealish had a good outing, carrying the ball forward relentlessly and drawing fouls. It was a professional and solid performance, as City played out the final minutes without any scare.

A familiar feeling for United

To be fair, it was not all bad for the Red Devils. Sancho’s goal was sumptuous while Fred had a decent chance before that. However, the backline was a shambles once again. Nobody marked De Bruyne for the first while the second was a valiant but futile attempt. There was nothing they could about the third, even though it took a glance off of Maguire.

His 9th 🅰️ of the season. 🇫🇷 pic.twitter.com/bmFGMnihrK

Too many individuals performed way below their natural game. Bruno Fernandes, Aaron Wan-Bissaka, Alex Telles all had horrendous outings while Maguire himself was not great. If not for De Gea, it could have five or six. Of course they missed Ronaldo but even with him, there were few who would expected a different result.

City reopened a six-point lead at the summit of the table though Liverpool have a game in hand. The situation is way more complicated for United who were already in fifth-place after Arsenal’s win. The Gunners have three games in hand and sit a point ahead. Spurs have three games in hand and are five points behind. West Ham trail by two points. It will be a nervy finish.