He Kane do it! 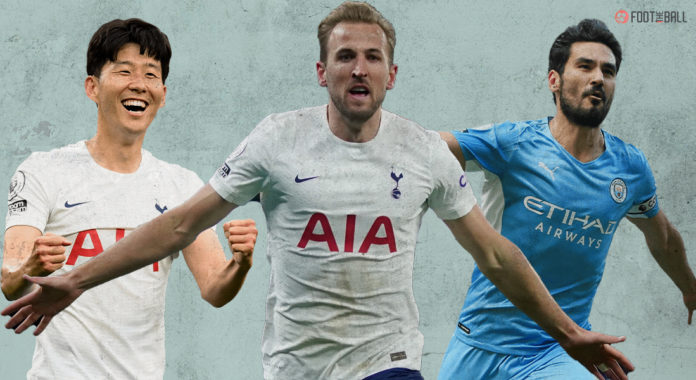 The defending champions Manchester City hosted a faltering Spurs side in need of rejuvenation.

The away side took the lead within five minutes. Harry Kane dropped deep to receive the ball and set Heung-Min Son on his way behind the City backline. With Ederson charging out, Son calmly fed the ball to Dejan Kulusevski who rolled it into the net for his first ever Premier League goal.

Having taken the lead, Spurs were finding it hard to get hold of the ball. City were dominating possession and looked threatening, especially down the left with Joao Cancelo. Ilkay Gundogan came the closest to equalize, smacking his curling shot against the post after good work from Raheem Sterling on the left side again. But the German was not denied next time. Sterling’s fizzing cross was pushed by Hugo Lloris only as far as Gundogan inside the box who lashed it home just past the halfhour mark.

34. Get in!!! 💥@IlkayGuendogan gets us level – @sterling7 whipped in a dangerous ball that Lloris failed to deal with, it came out to the German who scored, as he always does against Spurs! 💪

The rest of the half was much of the same and Spurs really looked like a team that needed fresh ideas if they were to win. City were enjoying possession and looked comfortable enough for most parts.

Indeed, the second half started in much the same fashion as Spurs were dropping back deeper. But just as the pressure was mounting, the away side hit back again. Son’s cross from the left was emphatically side-footed home by an onrushing Kane to give wrest the lead back.

A superb finish from Harry as Sonny floats in a spectacular pass!

The England striker should have scored a second within minutes but his low strike was saved by the foot of Ederson as the pair went one-on-one. At the other end, Gundogan’s shot was palmed away by Lloris at full stretch flying through the air. However, it would be Kane who would get his double but only for a moment. Kulusevski’s deflected shot found the striker who finished smartly at the near post but the Swede was offside and the goal was chalked off.

Just when the game seemed to end in favour of Spurs, it took another wild turn. A cutback inside the box struck Cristian Romero’s outstretched hand giving Riyad Mahrez the perfect chance to level things up. The Algerian made no mistake, lashing his shot into the roof of the minute in the second minute of injury time. The drama continued as Kulusevski’s cross from the right was headed home by Kane to snatch all three points back.

Kulusevski is onside and this one stands!

Harry Kane has scored at the death!

City crumble right at the last

Having the best defence in the league so far but one could not have guessed it watching this performance. Ruben Dias had one of his poorest games for the club, being dragged out of position for the first goal. His centre back partner Aymeric Laporte was caught ball watching for Spurs’ second as Kane ghosted in to finish. Offensively, things were not going great either as Pep Guardiola’s side struggled against the low block.

João Cancelo for Man City in the first half vs. Tottenham:

They were getting forward plenty of times with the wingbacks joining the attack at every opportunity. The dominance of possession counted for little but they looked to have secured a draw right at the last with a penalty. But Kane’s bullet header just seconds after that made sure City suffered a first league defeat since October.

Those two again for Spurs!

The partnership between Son and Kane is one of the most lethal in the Premier League, even when the team is losing. They were at their best levels today, linking up effortlessly for the two goals. Kane, in particular, was superb in coming deep to collect the ball and facilitating attacks that caused City all kinds of problems. He could have had a hat-trick but a saved shot and an unlucky offside dashed those hopes.

Harry Kane has been directly involved in 6 goals in his last 6 games in all competitions (5⚽️ & 1🅰️).

Moreover, the backline was also tremendous in winning aerial battles and forcing City to work extremely hard. Cristian Romero led the way but his handball looked to have contrived to turn a win into draw for Spurs right at the last. However, Kane popped up right at the last to score the eventual winner and send the away side into raptures.

The top four gets interesting

City’s lead have been cut down to six points, with second-placed Liverpool still with a game in hand. For Antonio Conte and Spurs, they are five points behind Manchester United in fourth but have two games in hand over the Red Devils. It is looking to be an extremely tight finish for all the European places and of course, the title.