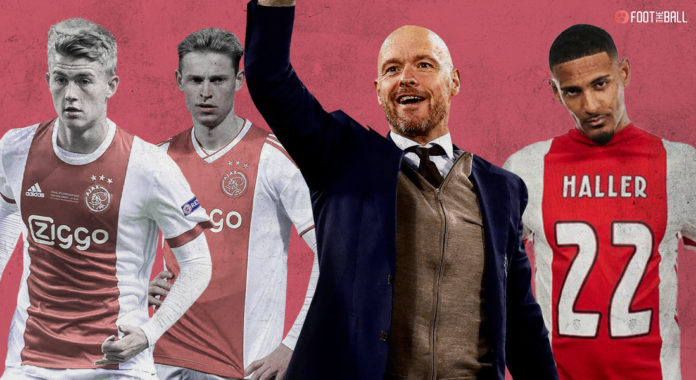 Ajax has been an ever present force in the Champions League. They have won four UCL titles which is no mean feat. They are a globally renowned and recognizable club throughout the world.

The days of Johan Cryuff, Patrick Kluivert, Seedorf have gone but since Erik Ten Hag’s appointment in December of 2017 the tide has slowly started to turn in Ajax’s favour yet again.

🏆 Patrick Kluivert was the hero as Ajax were crowned champions of Europe #OTD in 1995 🏆#UCL | #UCLfinal pic.twitter.com/j1gUes8mh5

He has been nothing short of a revelation at Ajax in fact. Before his appointment Ajax had struggled to make a significant impact in the Champions League since the glory days.

His revolutionary tactics saw them go on a dream run during the 2018-19 Champions League season which ended in the semi-finals, but they emerged as dark horses very early on during the campaign.  They beat the likes of Real Madrid in the knockout stages with ease, stunning the defences of the European giants with slick patterns of play.

2018-19: Ajax get to the semi-finals of the Champions League

Even though they lost to Tottenham in the semi-final on away goals they really should have won that game. It was a bizarre match and a brilliant watch for football fans around the globe.

They had the likes of Mathais De Ligt, Frenkie De Jong, Dusan Tadic and Donny Van De Beek, who were thriving in Ten Hag’s system running the show. Except Tadic the 3 Dutchmen have left the club in search of new challenges.

But Ajax, in typical Ajax fashion, have managed to build a squad of players that look like they are ready to show the true power of the Amsterdam club yet again. The crop of players part of Ajax’s Champions League squad this season look formidable.

Despite it consisting of a lot of young players, they seem to play without fear. Very reminiscent of their 2018-19 squad but this team seems more complete, almost out to prove something, of course fear does not concern them at all. They are daring to dream as they should.

Since Ten Hag’s arrival they have always played a fluid and vertical tiki-taka style of play. They are an extremely in game adaptable team, players are comfortable with positional changes and the importance of technical ability is paramount. Ajax play a press and possess system which is becoming a blueprint for success in recent times.

#Ajax 2018/19 accounts cover their most successful season in years when they won the Dutch league and cup double (for the first time since 2002) and reached the Champions League semi-final with a dazzling brand of football. Some thoughts in the following thread.

Even though they adhere to a very specific structure in possession, they are comfortable in multiple formations that they switch between, making them impossible to stop. They switch between a 3-4-3 diamond and a 4-1-4-1, depending on the space and situation on the pitch.

On the latest Tactics Room episode, @WillFowler5 takes a deep look at the tactics behind Ten Hag's Ajax.

The centre backs and one of the defensive midfielders are mainly responsible for build up play. Usually, it is Edson Alvarez who aids the centre back pair of Jurrien Timber and Lisandro Martinez. This triumvirate is extremely comfortable on the ball and are exceptional passers of a ball.

This allows the wingers and the wingbacks to take up wide positions but the wingbacks do tuck in when needed. Nousser Mazroui has been influential this season as Blind usually becomes the 3rd centre back.

🔹 Chelsea attack from the back
🔹 Ajax's midfield overload

Who's the best team to watch in the #UCL?@FedExEurope | #FPZunpacked

While attacking the 3-4-3 looks more like a 3-2-2-3. The wingers move high and wide, as Granvenberch moves up next to the number 10  often as another centre mid and one wingback make another line behind them.

The addition of Seb Haller, has seen them add a much needed different dimension to their gameplay. In 2018-19 they played without a recognized striker in most games, but the former West ham striker is the perfect player for them. Standing at 6ft3 Haller is comfortable with playing his back to goal.  Ajax utilises the striker well, playing the ball into Haller to progress up the pitch when needed.

Even though Ajax are in constant motion on the pitch the added threat of Haller has proved fruitful as he currently leads the Champions League scoring charts with 10 goals, which has also made sure they are the 3rd highest scoring team in the UCL. Anthony has been productive in attack this season. He has scored 2 and provided 5 assists.

At times the 2018-19 squad looked bereft of physicality and tenacity, but this squad of players is arguably better especially with the likes of Haller and Anothony their attacking threat is immense.

Ajax are daring to dream the impossible dream this time around although not really impossible for them as they have won the UCL before but this squad of players that they have assembled so smartly and carefully, blessed with yet another golden generation from their academy also coming through led by Kenneth Taylor,Jurrien Timber, Devyne Rensch, Ryan Granvenberch and Danilo.

The experience of Daley Blind, Seb Haller and Dusan Tadic compliments this squad so well that their synergy transforms into goals on the pitch as shown by their demolition of Borussia Dortmund twice in the group stages.

This squad is daring to dream, the intensity they are doing it to is making them seem as devils possessed.

If Ajax manage to lift the UCL trophy this season it will be down to the players, the manager and everyone at the club who has made sure that despite constant squad turnover Ajax have finally become more than a dark horse in Europe again, they are ,and should be considered serious Champions League hopefuls this time around.

OFFICIAL: Ajax manager Erik ten Hag extends his contract with the club until 2023, amid reports he could be targeted by Tottenham ✍️ pic.twitter.com/cslMm2py5J

Not only one of the smartest clubs in Europe but can soon become the powerhouse it once was.