BEST IN THE WORLD 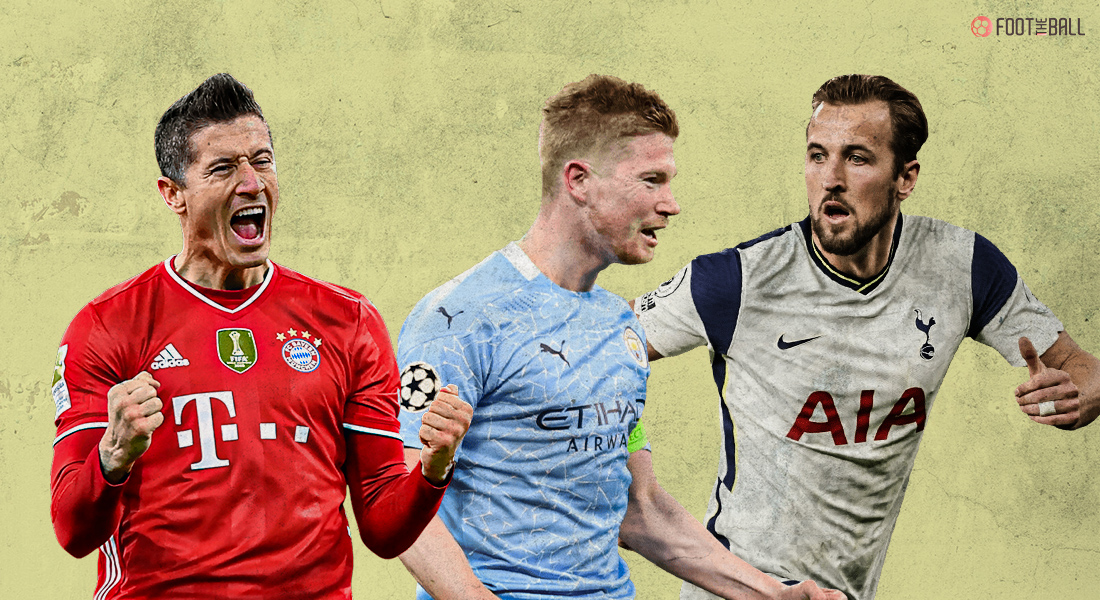 With the European Championships and Copa America in full swing and entering the final stages, the talk has inevitably turned to who wins the biggest individual prize.

The Ballon D’Or prize for 2021 is a keenly watched race this time after the award was cancelled last year. Lionel Messi is the current holder having claimed his sixth prize in 2019. There has been intense speculation that the Argentine could pick up his seventh after another scintillating season. However, the competition is closer than it looks this time. FootTheBall breaks down the top five contenders for the coveted prize.

The Manchester City midfielder had another fine season for the Premier League champions, netting 10 goals to go with 18 assists. De Bruyne was also in top form for Belgium, with a goal and two assists as the Red Devils exited at the quarter-finals stage.

He has already won the PFA Player of the Year award for a second consecutive season along with the Carabao Cup. However, in terms of pure statistics, it was a far cry from his record breaking 2019-20.

Only Thierry Henry, Cristiano Ronaldo and Kevin De Bruyne have won the PFA Men's Player of the Year award in back-to-back seasons 🏆🏆

If Belgium would have made it to the final or if the Cityzens won the Champions League, then his case might have gotten stronger. That was indeed the case with Luka Modric in 2018, and De Bruyne could have followed his footsteps if this great season went even further up. Without those factors in his favour, it does look like a very remote possibility that De Bruyne will the top individual prize this year.

The English talisman enjoyed a supreme season in the English top-flight, picking up both the Golden Boot (23 goals) and Playmaker of the Season (14 assists) award. Kane has been one of the most consistent performers for a floundering club. His inability to win a team trophy as of yet could end up as the deciding factor in terms of voting. Indeed, Spurs’ defeat to Manchester City in the Carabao Cup final was the closest they had come in years.

The only shining light in that category will be if the Three Lions go on to win the Euros. They are already in the semi-finals, with Kane already scoring thrice. If he can keep up this fine form and inspire the national squad to break their trophy-less hoodoo, his odds of winning the Ballon D’Or will be boosted significantly.

The Juventus striker has shown no signs of slowing down even at the age of 36. Ronaldo racked up 35 goals and five assists in all competitions for the Old Lady, enroute to winning the “Best Attacker” award in Serie A.

He was always crucial in his side winning the Coppa Italia while his exploits for the national team have been equally astounding. Portugal’s record cap holder also becomes the joint top-scorer in men’s international football during Euro 2020.

Ronaldo gave it his all for Portugal 👏 pic.twitter.com/j7vC2iSqGZ

Ronaldo also leads the Golden Boot race here with five goals and an assist. The only blemish on another solid season has been the Selecao’s meek defence of their 2016 title, ending with them getting knocked out in the round of 16. Nevertheless, the six-time winner is in with a real shot of winning the Ballon D’Or once more.

The European Golden Boot winner had a mind-boggling season which ended with heartbreak at the national level. Lewandowski scored 41 goals and provided seven assists in just 29 Bundesliga matches, enabling him to break Gerd Muller’s long standing scoring record in a single campaign. Many of his supporters feel that last year was the prime time for Lewandowski to win the Ballon D’Or after Bayern Munich won all three European prizes on offer along with the league.

Robert Lewandowski has broken the record of most goals scored in a Bundesliga season set by Gerd Müller pic.twitter.com/RJhRAVfPL7

This time around, though Bayern won the Bundesliga as usual, their European campaign failed to reach the same heights. However, Lewandowski brought his goals to the Euros, scoring thrice as Poland failed to qualify for the knockouts after a narrow loss to Sweden in their final group game. Nevertheless, his club form has been unmatched this term and if he does indeed end up winning his maiden Ballon d’Or, it will not be totally unfair.

The current holder and frontrunner this time around as well, Messi has just been going about doing his work. 35 goals and 15 assists in all competitions is the expected output from one of the game’s all-time greats.

He won the Pichichi Trophy as well as leading Barcelona to Copa del Rey victory. Though their La Liga campaign fell off track in the final games of the season, Messi did all he could to almost singlehandedly take the game to the contenders.

Messi is TEARING up South America in the Copa America 🤯🇦🇷 pic.twitter.com/VB9G9hNLT7

He has continued in that blistering form for La Albiceleste too, scoring four goals and assisting another four to lead both charts. Argentina are in the semi-finals of the Copa America and for once are looking like genuine challengers to Brazil’s title. If Messi can add a first international trophy to his long, long list of honours, he is sure to win the Ballon D’Or once again.