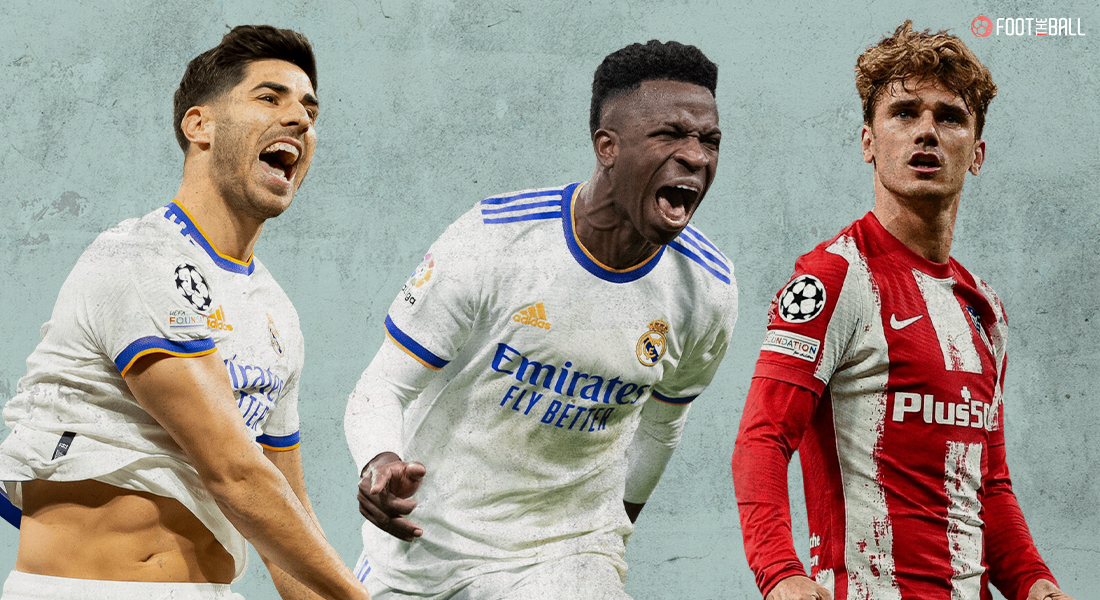 The first Madrid derby of the season found the two teams in very different straits. League leaders Real had 39 points from their 16 matches with Atletico 10 points behind in 4th-place. Needless to say, the win was of vital urgency for Los Rojiblancos while Los Blancos aimed to pull ahead at the top.

The away side started brightly on the front foot, trying to take the game to Real early on. However, that pressure did not mount to any meaningful chances. Real slowly grew into the game and keeping possession better before Europe’s most feared duo right now struck. Marco Asensio’s through ball set Vincius free down the right whose chipped cross was volleyed home by Karim Benzema.

The goal had clearly rattled Atletico’s confidence who were now struggling to keep ahold of the ball. Their best chance came from Antoine Griezmann’s curling free-kick from the edge of the box. Thibaut Courtois had to be at full stretch to push it away. Vinicius had the next shot of the game, trying to squeeze one in from a very tight angle. However, Jan Oblak was aware of his intentions and denied the Brazilian as the score remained 1-0 till halftime.

Diego Simeone brought on Joao Felix and Thomas Lemar, the pair immediately injecting energy into the side. Lemar’s cross made its way to Felix whose strike was held by Courtois. Soon after, Felix turned provider, setting up Matheus Cunha who drew a sharp save from Courtois again. And once again, it was Real who struck. A rapid counter attack ended with Asensio sweeping Vincius’ pass across the box into the net. It was looking like no way back for Atletico with Simeone bringing on Luis Suarez and Renan Lodi just after the goal.

Marco Asensio scores off of Vinicius Jr.'s second assist of the game 😤 pic.twitter.com/Z4Jn2YnQGp

Courtois was having a quiet period but was alert in pushing Lemar’s free-kick away after it evaded everyone. On the other side, Vinicius was inches away from getting his foot on Ferland Mendy’s cross to score a third for Los Blancos.

Eight points clear at the top by mid December and a further five ahead of the defending champions. Caro Ancelotti’s men are really turning on the heat for the La Liga title this season, aided by the their faltering rivals. All of their best qualities were on show in the derby, the team excelling across all departments. The defence knew every time where to position themselves best, Eder Militao shutting everything down.

The midfield trio had one of their best outings yet, Luka Modric and Toni Kroos running rings around Atletico all night. Benzema got his customary goal to hit 20 goal contributions, linking up with Vinicius as he has done so well this season. The win never looked in doubt after the first goal went in and so it proved.

ATLETICO HUFF AND PUFF TO NO AVAIL

It has not been a great start so far for Simeone and co. who have been far from their best selves. They made an energetic start to each half, which could have resulted in a goal, especially in the second period. However, they were caught out after the initial bursts subsided due to a lack of cutting edge and just poor play. Koke’s cheap giveaway allowed Real to move down the right and set up Benzema’s goal.

The second was just lethargic defending as they were slow to see the danger and react appropriately. Furthermore, they were not helped with Simeone’s tactics of sitting off their opponents and not pressing feverishly which allowed Real to play at their own pace after taking a two-goal lead.

VINICIUS IS IN A CLASS OF HIS OWN

Two assists at home to take his season’s tally to nine across all competitions. Add to it 10 goals and the winger is in the form of his life. His pace, trickery and ability to carry the ball over long distances terrifies defenders. He is very hard to stop down the flanks, winning fouls as well as delivering crosses that are finished off by his teammates. No doubt his form and fitness will be key if Real are to challenge on multiple fronts for silverware.