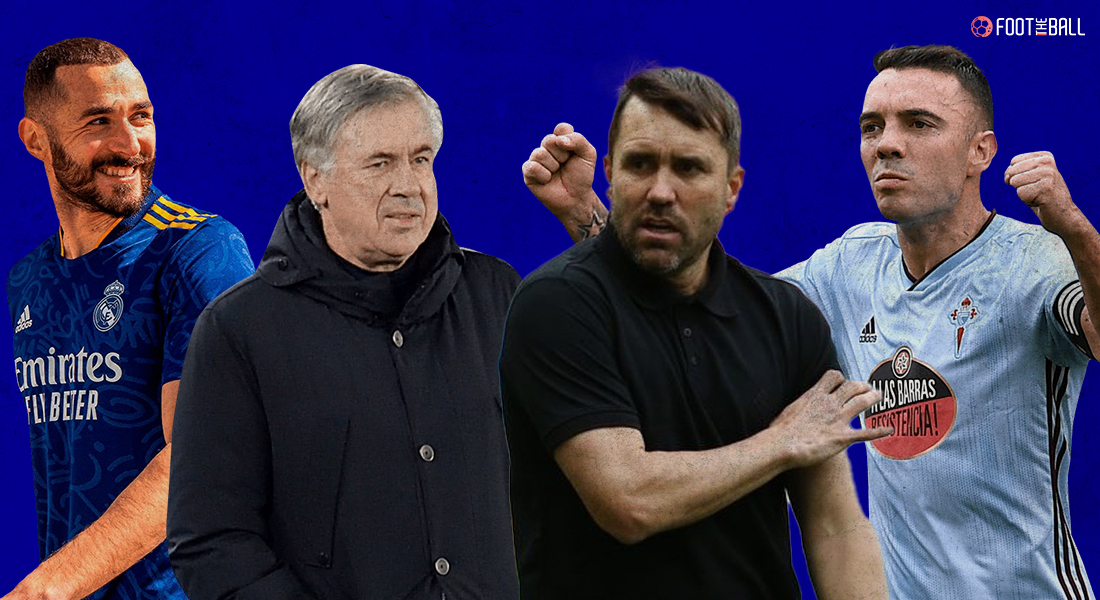 League leaders Real Madrid host Celta Vigo in the third game week of La Liga on Sunday. Los Blancos come home for the first time this season after playing three straight away games. And it proves to be a wonderful homecoming as they return to their iconic stadium. Los Blancos are playing their first match at the renovated Santiago Bernabeu after nearly two years. Though the stadium renovation isn’t complete yet, it is ready to host the games along with the renovation works parallelly.

Who'll come out on top in #RealMadridCelta? 🔮

Real Madrid have been on fire under Carlo Ancelotti in the new league season. They have registered two wins and a draw in their opening fixtures. In the process, they have scored eight goals while conceding four times. Having registered their first clean sheet of the campaign against Real Betis, they will look to build on that display against Celta.

Celta meanwhile have been in demoralizing form after three games. Los Celestes lost their opener to defending champions Atletico Madrid before drawing with Osasuna to get their only point thus far. A 1-0 loss to Athletic Club immediately followed. Eduardo Coudet’s men have been misfiring in front of the goal. They hope to turn it around after the international break by humbling the mighty hosts.

Carlo Ancelotti has issues on multiple fronts to worry about. Their star midfielder Toni Kroos is out for the game and Luka Modric is a doubt for the game. Though they look stacked in the midfield, the availability of South American stars Casemiro and Federico Valverde would play a huge role. New signing, Eduardo Camavinga might make a cameo off the bench. At the back, left-back Ferland Mendy is ruled out of the clash and centre-back Nacho awaits a late call from the fitness team.

In attack, Ancelotti has to consider the form of multiple forwards before rolling out his starting eleven. Karim Benzema is the undoubted starter at centre-forward. The other two positions out wide have cut-throat competition. Vinicus Jr started the season in fine form for Madrid and looks to carry it. Meanwhile, Gareth Bale and Eden Hazard had nice outings in the recent international break and give their manager a headache.

Celta meanwhile have injuries to very few starters. Kevin Vazquez is close to returning following a fractured jaw, while Jose Manuel Fontán is on his way back from a hamstring injury and could be in contention. Miguel Baeza is a doubt with an ankle injury.

But Coudet would be worried by the lack of form of several key men on the field. They have only scored once in three games and that too from the penalty spot. Lack of chances in open play might make him alter his formation or his midfield options. In defence, Joseph Aidoo lost his place to Jeison Murillo and the centre-back might start again ahead of Aidoo.

Real Madrid have seen several key men hit form this season. But one man who was always in golden touch was Karim Benzema. The French forward is only getting better with age and his ability to influence games is phenomenal. At 33 years of age, he picked up where he left last season.

Benzema already has two goals and three assists to his name in three games. His finishing is clinical as ever and he is dropping deep to link up play and is popping up with assists. He can also act as a target man thanks to his strong physicality.

The on-loan Colombian centre-back Jeison Murillo faces a huge test as he goes head to head with Benzema. The defender is very physical in nature and tries to body the striker. It’ll be a key matchup on the field definitely.

The veteran striker is Celta’s only hope going forward. The side have looked bland in possession and didn’t score once from open play. Aspas tried his luck and was rewarded with a penalty against Atletico Madrid. The Spaniard knows that he needs much more than luck to beat Real Madrid’s stern defence.

Aspas scored 14 times and assisted 13 times last season. He might be hoping to pick up that form early again to get the first win of the season and crawl out of the relegation zone.

He can’t beat the centre backs David Alaba and Militao for pace, but he can beat them with clever movement and his usual intricate passing.

Real Madrid are returning home again and they might want to put on a show against Celta Vigo. The miserable state of the opposition might help them to go harder. If the stars of Real Madrid dazzle again, it may be a walk in the park for them.

For Celta, this game means a chance to rediscover themselves. Given the time he got during the international break, Coudet must’ve done proper homework on his opponents. They need to stay patient and hit back on the counter with Nolito pulling the strings.

FootTheBall predicts a 3-1 victory to Real Madrid against Celta Vigo.