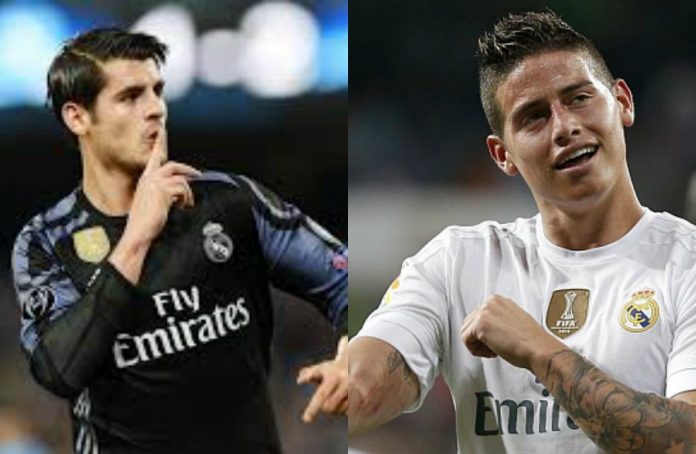 Florentino Perez has sensationally offered Chelsea Alvaro Morata and James Rodriguez in a double deal for a combined total of £132m, according to reports in Spain.

The Real Madrid president wants rid of both players to help fund a summer move for teenage superstar Kylian Mbappe.

Madrid thought they were selling Morata to Manchester United, but have been left frustrated after the deal to sign Romelu Lukaku was announced this morning.

Chelsea thought they were getting Lukaku and are now scrambling around to find a replacement for Diego Costa.

They want Morata and have now been offered the chance to get him – as well as Colombian ace Rodriguez.

Both players want to quit Madrid after falling down the pecking order under Zinedine Zidane.

And Madrid think they can offload both in one sensational deal.

Diario Gol claim Perez has ‘not hesitated’ to contact Blues chiefs to offer the proposal of both players for £132m (€150m).

Madrid want to land Mbappe from Monaco in a deal that will costa over £100m and need to balance the books with the sales of Morata and Rodriguez.

Reports in Spain have linked Rodriguez with United but the clubs have been struggling to negotiate moves for Morata and David de Gea and they are unlikely to find ground over the Colombia star.

Rodriguez joined Madrid after the 2014 World Cup from Monaco but has struggled to show the form that made him one of the world’s most expensive players in the deal worth around €80m.

Antonio Conte has been frustrated with Chelsea’s transfer activity this summer with only Willy Caballero signing.

Antonio Rudiger’s agent is in London to finalise his move while Alex Sandro and Tiemoue Bakayoko should also complete moves next week.