It’s the time for Benz 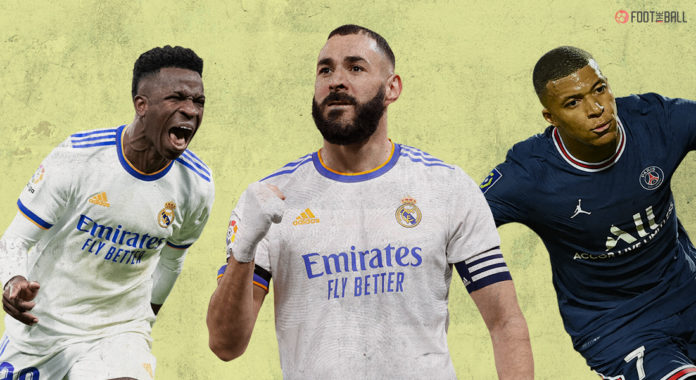 Real Madrid welcomed PSG to the Santiago Bernabeu, down a goal in the tie. With no away goals to break ties, this game promised to be highly exciting.

It was a fast start from both sides looking for the early goal. Madrid were controlling possession and fashioning shooting chances. On the other side, it was the pace of Kylian Mbappe in behind the defence. The Frenchman drew two fine stops from Thibaut Courtois within 15 minutes.

Karim Benzema had a curling effort that was pushed behind by the fingertips of Gianluigi Donnarumma. Mbappe had the ball in the net just after the half hour mark but Nuno Mendes was found offside in the buildup. Just seconds later, Benzema’s high header was straight at Donnarumma. However, it was his younger cohort who finally got his goal.

Madrid lost possession in a dangerous area and Neymar switched the ball for Mbappe to run in behind. He had acres of space and finished superbly at Courtois’ near post to double PSG’s aggregate lead. The Parisians were getting in much better positions to close the first half with the attack and midfield combining brilliantly. Carlo Ancelotti knew he had to shake things up if Madrid were to get back in the match soon.

Mbappe had the ball in the net for a third time but was offside himself this time. Vinicius Jr. had a low shot pouched by Donnarumma as Madrid still lacked possession of the ball. The Italian goalkeeper’s fine night got really bad just after the hour mark. A simple pass to him was quickly closed down by Benzema. Donnarumma, in a rush to clear, passed straight to Vincius Jr. inside the penalty box who gave it back to Benzema for the equaliser.

The Brazilian had a great chance to level the tie as Benzema’s strike broke kindly for him. However, he could only lift the ball high and wide on his left foot. Just minutes later, Madrid were level on aggregate. A superb lung bursting run from Modric found Vinicius Jr. who just took a little long to shoot. However, he returned it to Modric and he slipped in Benzema whose strike deflected off Marquinhos and into the net.

A touch of genius from Modrić. Incredible vision, timing and dynamics; at the other hand Benzema's positioning, body orientation and first touch was of a top quality. What a game. https://t.co/ykzViKNqb5

The most remarkable turnaround was complete right after PSG’s kickoff. Vinicus Jr. ran at PSG’s surprised backline straight away. His pass was kicked away by Marquinhos straight into the path of an onrushing Benzema whose first time finish completed his hat-trick.

The rest of the game was purely ritualistic. PSG tried but to no avail with Messi’s free kick being the closest. Madrid were through as PSG collapsed spectacularly to lose.

The mentality of the elite. The 14-time winners were second-favourite for much of the match but their attack was also the threat. Vincius Jr. was constantly troubling Achraf Hakimi while Marquinhos had an unusually poor game. Still, it did not look like it was going be Los Blancos’ night till Benzema stepped up.

His hat-trick combined by some excellent play from the midfielders ensured that they remain alive. Ancelotti was spot on with his substitutions as well, bringing on Eduardo Camavinga just at the right moment for Toni Kroos. A special, special night for Madrid and there have been no shortages of that in the past.

Shades of that infamous loss to Barcelona surfaced once again. PSG were comfortably in control of the tie till the 60th minute. Then Donnarumma made a ghastly error that seemingly opened the floodgates. PSG were rattled and Modric’s industry made the second. The third was pure magic as Vinicius Jr., who caused trouble all night, found Benzema who made no mistake. Mauricio Pochettino will wonder what more he could have done to set his players up for the best possible result. Messi’s had a very quiet evening, mostly breaking up attacks or picking the ball up in midfield areas. The ambitious owners will have to wait for an European crown.

Benzema is the man

The veteran upstaged the upstart. Benzema led the line with distinction and his industry made all of the goals possible. It was his closing down that forced Donnarumma into making the mistake. Then it was his expert positioning to find Modric’s pass for the second. The third was pure class, hitting the ball with the outside of his boot first time to clinch the game.