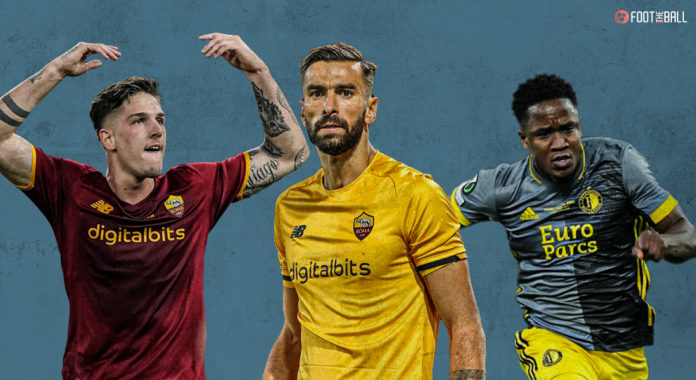 AS Roma became the first ever winners of the UEFA Europa Conference League as they beat Feyenoord 1-0 in Tirana, Albania thanks to a solitary first-half goal from Nicolo Zaniolo.

Both sides came out of the blocks with intent and the intensity in the opening exchanges was quite high. It was often cagey as the midfield got crowded with both sides playing three in the centre of the park.

Feyenoord enjoyed more of the ball for the opening twenty minutes but were unable to create any chance of note. The three Roma centre-backs – Gianluca Mancini, Chris Smiling and Roger Ibanez – looked up to the task of keeping this attacking Feyenoord side at bay.

The Italians were happy to sit back and attempt to catch their opponents out and that is exactly what they did. Mourinho’s side had only 38% possession by the 25th minute but they took the lead nonetheless a few minutes later. A late run from Nicolo Zaniolo caught the Feyenoord defence out through a simple ball over the top from Mancini. The 22-year old brought it down expertly before poking a finish past Justin Bijlow in the Feyenoord goal.

The goal opened the game a bit as the Dutchmen were forced to chase the equaliser. Tammy Abraham, quiet so far, found space to run into down the right channel but was unable to play the telling pass. Orkun Kokcu hit a swerving shot straight at Rui Patricio after a scuffle between Smalling and Cyriel Dessers.

Roma saw out the half without conceding a big chance and Mourinho would have been very happy with his team’s performance. However, Feyenoord came back out with renewed energy and earned a corner within two minutes of the restart.

A short corner routine allowed Sinisterra to fire in a low cross which was deflected onto his own post by Mancini. The follow up came to Guus Til whose volley was well saved by Patricio. The Portuguese goalkeeper was in action again two minutes later when left-back Malacia tried his luck from distance. His powerful shot needed saving and was palmed onto the post by Patricio.

The following corner nearly brought the equaliser as Dessers almost got on the end of a near post flick on as Feyenoord turned up the pressure. There was a controversial decision at the other end soon after as Abraham seemed to be impeded by centre-back Marcos Senesi as he ran through but the referee, and VAR, deemed the contact negligible.

Arne Slot’s side continued to push with their left wing looking particularly effective. Rick Karsdorp gave the ball away to Malacia high up who cut it back to Reiss Nelson but the Englishman dragged his shot wide.

Mourinho changed his side’s shape, throwing on Jordan Veretout for the goalscorer Zaniolo to shore up the midfield. The change seemed to help as Roma regained some composure and Veretout drew a sharp save from Bijlow with his first-time attempt from a half-cleared corner.

Close from Veretout! His drive is parried away by the goalkeeper!

The equaliser just would not come for Feyenoord and Slot’s men were guilty of over-complicating things in the final third and playing one pass too many. They had Bijlow to thank when he made an excellent save from Pellegrini on the angle who had been played through by Veretout.

Roma saw out the last few minutes without giving Feyenoord a quarter to become the first ever UEFA Europa Conference League winners. Here are our key talking points from the match –

Roma got the win in the end but it could potentially have been much easier for the Italians had the referee viewed things differently early in the second half. Tammy Abraham was quite clearly pulled back by Senesi but the striker did not go down and the decision was not given in his favour.

The VAR check deemed it to not be a clear and obvious error and the decision stayed. It very easily could have been a red card for the Feyenoord defender and there will certainly be question marks on why it wasn’t given. An example to remember for the next time yer da complains about players going down to easily these days.

Feyenoord will take silver back to the Netherlands but Arne Slot’s team put in an impressive performance, especially in the second half. The fact that their lineup was the youngest in a European final since Ajax in 2017 made things all the more remarkable.

There campaign overall has been eye-catching and there are a lot of players that could make their way around Europe soon. Sinisterra and Malacia in particular were exciting while Nelson will return to Arsenal. Senesi too had a great game aside from that one error in judgement and has garnered interest from Italy.

This was a Mourinho performance if there ever was one – defensively solid & dedicated and ruthlessly efficient in attack. He may not be at the forefront of tactical innovation anymore but Jose has shown that he has still got what it takes to make the magic happen and bring joy to clubs.

This win meant he has led Roma to their first major European trophy, their only previous continental success being the Fairs Cup in 1961. It also made him the first manager to win all three of the Champions League, Europa League and the Conference League. Mourinho also became the first manager to win a major European trophy with four different clubs.

There has been a lot of revisionism in the past few years over his place in the game’s history and this triumph serves as a timely reminder of his genuine class.