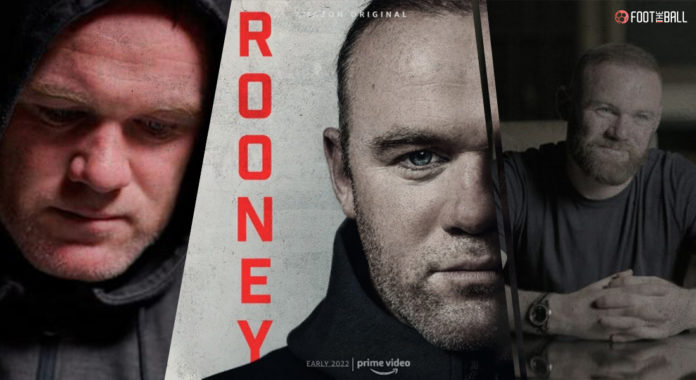 It is shaping up to an engrossing year of footballing documentaries on Amazon. The ‘All Or Nothing’ series is already proving to be a hit, with the one on Juventus released last year being another solid watch. Two more on the agenda focuses on Arsene Wenger and David Beckham respectively, but the current offering taking all the headlines is, of course, Rooney.

The goal. The commentary. The memories.

𝐑𝐨𝐨𝐧𝐞𝐲, a documentary on his life and career, available now on Prime Video 📺 pic.twitter.com/Ht6ZnjBmSr

Based on the playing career and behind-the-scenes struggles of Wayne Rooney’s personal life, it takes an in-depth look at the struggles that come with being Rooney. Having burst onto the scene as a ‘boy wonder’ at just 16-years-old with Everton, the documentary seeks to answer many lingering questions regarding the popularity and myth surrounding the now-Derby County manager.

The movie mostly revolves around the man behind the superstar footballer, with Rooney making some surprising and honest admissions. The discussions surrounding fighting on the streets as a youngster, getting cut and hurt, being angry a lot of the time and needing release are all explored in detail.

It charts his meteoric rise at Euro 2004, with England as one of the favourites to win the tournament.

🌍 @WayneRooney had the world at his feet. He belonged on the biggest stage.

However, though they could not go all the way, Rooney was firmly established as one of the most exciting players in world football with some exemplary showings as an 18-year-old. The anger in his personal times would have to be alleviated through binge drinking and struggling with mental health issues came to the fore, in some incredibly raw moments.

What about his club career?

Director Matt Smith was clear in his approach, focusing on the facts that were not known or seen during Rooney’s playing career. So for instance, there is hardly any clamour surrounding the 2008 Champions League winning campaign or breaking Bobby Charlton’s scoring record for Manchester United and England.

One of the most major talking points, that has already been discussed feverishly, is the revelation that Rooney wore longer studs in a match against Chelsea in 2006 as he wanted to hurt someone.

"I changed my studs, put longer studs in…"

Indeed, he did end up accomplishing his goal, with John Terry ending up in crutches. The FA is said to be investigating the incident now, but Rooney himself broke three metatarsals in his right foot. Though he would recover to make the World Cup squad in time, he hid a new injury to his groin from then-manager Sven-Goran Eriksson. Then came the infamous incident that changed his life as he was sent off against Portugal in the quarter-finals.

"I sent someone into Portugal's dressing room to get @Cristiano out. I think he might have been thinking "What's going to happen here?!"@WayneRooney on winning the Champions League and THAT red card against Portugal at the 2006 World Cup… pic.twitter.com/zdOJm6JC79

The backlash was immediate and never ending with his family constantly being under the spotlight. The final years of his club career were rushed through towards the end but overall, it felt like a man trying to make peace with his past demons.

When and where will it air?

Rooney was released on February 11 directly through Amazon Prime Video all across the world. It has a stellar cast of ex-footballers including Gary Neville, Rio Ferdinand, David Beckham and Thierry Henry.

Though the timing of the documentary seems a bit too early, given Rooney only retired a couple of seasons back, there is no doubt that the resilience nature he is currently showing with Derby is present throughout the film.

There is no doubt that Rooney is one of the biggest names of the last two decades in football and remains synonymous with club and country. However, the documentary strips back the persona of the footballer and also highlights one of the key areas of his life- his infidelity towards his wife Coleen and the accusations of philanderer that have dogged him all throughout his life at the top.

The on-field achievements have been put in as an afterthought, just to show that yes, he was great at that too. Though the film serves to do some PR makeover for Rooney himself, it can transform to a one-sided if predictable viewing at times.