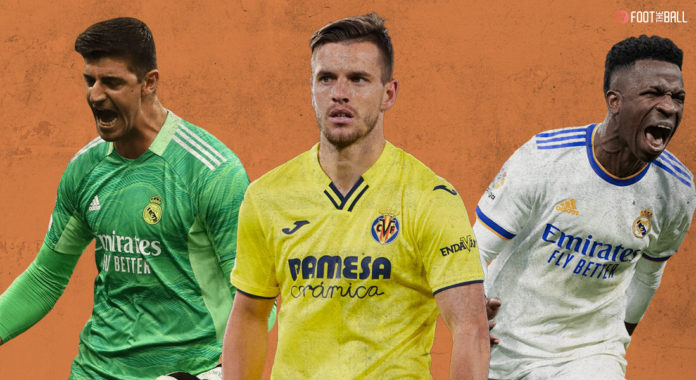 Villarreal welcome Real Madrid as the two sides look for a win that would have implications on the top four.

It was a bright start from the Yellow Submarine, wide attacker Samuel Chukwueze skipping past defenders and causing trouble. For the visitors, Vinicius was an ever present threat, winning fouls and driving at defenders. The first real chance fell to the home side, after some lovely work down the left from Alberto Moreno. Arnaut Danjuma’s shot at the second attempt striking post and getting away.

The game settled down a bit, but Villarreal were still large portions of the ball. Marcelo was struggling to deal with Chukwueze, who was looking the most dangerous man on the pitch. The first shot on target came through Moreno, his strong shot pushed away by Thibaut Courtois from the edge of the box. Madrid were feeling the absence of Karim Benzema as they barely offered anything offensively, with game level at the break.

It was Los Blancos who started on the front foot after the break, taking the game to the home side on a more regular basis. Gareth Bale’s shot after cutting inside onto his left foot striking the crossbar, having taken a slight touch of Geronimo Rulli. Vinicius was the next, running onto a pass inside the box and drawing Rulli into a smart save. Bale tried his luck again but Rulli was there again, his save threatening to trickle over the line but was hacked clear in time.

The game alive once again in injury time. Luka Jovic raced clear beyond the defence, and chipped the goalkeeper but could only find the crossbar again. Nacho was following up and his effort was cleared on the line by Serge Aurier. That was the last of meaningful action as the game finished goalless.

Tale of two halves for Villarreal

Unai Emery’s side were very much on top all throughout the first half, pushing Madrid back frequently and playing in the final third. Chukwueze was running Marcelo ragged, the veteran having a really tough time on pace. Lo Celso was proving another strong presence in midfield while their best chance came after breaking down the left side. However, the second half was a different story as they were having to defend deep and had to rely on counter attacks. Rulli was in fine form to deny Madrid’s attackers while Villarreal looked to snatch it at the end.

Sluggish Madrid pick up a point

Not the best of performances by Carlo Ancelotti’s men at all with there being several moments where they could have actually lost the game. Marcelo’s struggles highlighted how important Ferland Mendy is to the team, the Brazilian clearly feeling his age. Vinicius tried to do something all throughout the match, his flair shining at every opportunity but without Karim Benzema, he was fighting an uphill task. Bale was completely anonymous in the first half but came alive in the second, having two good chances and being unlucky to not score at least once. Nevertheless, a point in tough conditions will feel good.

Madrid can be caught

Los Blancos are only four points ahead of Sevilla in second after tonight’s result, and they have certain issues to deal with in order to secure the title. No concrete replacement for Benzema in the squad to supply the goals. Same goes for the left-back position. The right wing looking a little off pace as compared to Vinicius’ flank. These are all chinks that can show up towards the business end of the season with Sevilla looking the closes to take advantage.