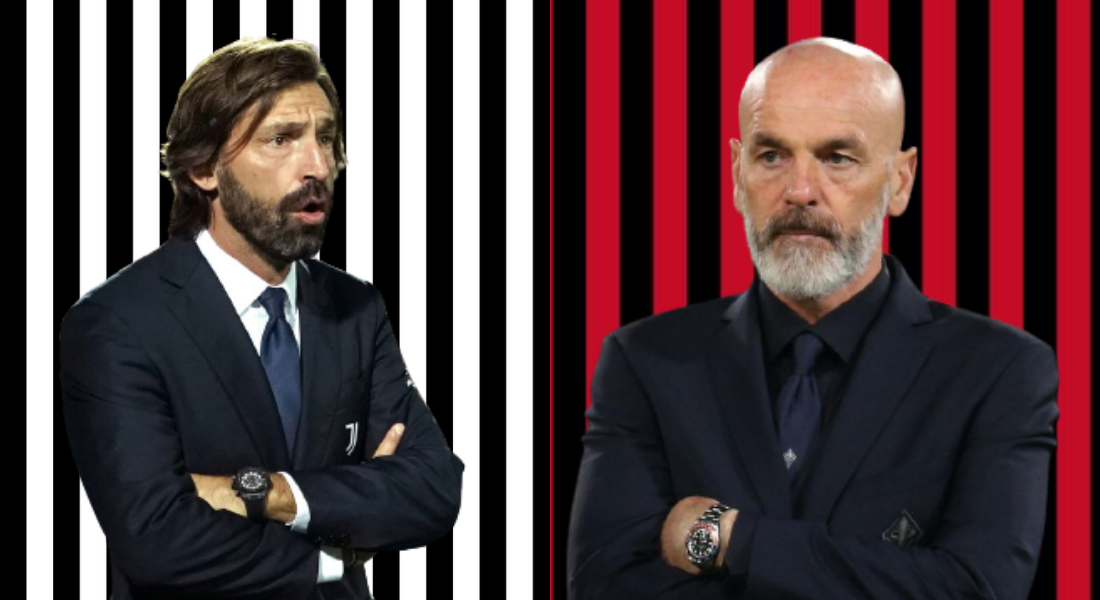 Juventus have dominated the Italian top flight for the last ten years. They have risen to the pinnacle of Italian football almost unchallenged, forcing some critics to label Serie A as a farmers league. Over the last couple of years though, some challengers have tried competing with the ‘Old Lady’, such as Gasperini’s Atalanta and Conte’s Inter. But this season another old foe has come back into the fray, AC Milan, who have been revitalized under Pioli. Currently sitting on top of the Serie A table, Milan have been unbeaten since the restart in 2020. Pioli has found a system to extract the best out of this youthful Milan side. Players like Hakan Calhanoglu, Theo Hernandez, Alexis Salemakers, Rafeal Leao and Davide Calabria, have found a new level of performance, making his Milan side hard to break down and lethal in transition. They have also shown youthful grit and a stubborn mentality during the course of the season.

While Juventus under new boss Pirlo find themselves in an unfamiliar position in the table, sitting 5th , outside of the champion’s league spots in Serie A.  Pirlo’s Juventus has struggled to find consistency and form. Juventus has had their fair share of injury troubles this season though, and Covid has really hampered Pirlo’s ability to nail down a starting 11, which can be blamed for Bianconeri’s performances this season.

2021's starting #SerieATIM League Table! 👏
Where do you think your team will be at the end of the season? ☝️ 👇#WeAreCalcio pic.twitter.com/Zuo9ZyAjmR

These two Italian giants face each other in a Serie A clash on the 6th , and this could turn out to be a game that acts like an early title decider. It has historically and culturally always been one of the biggest games in Italy attracting loads of media and public attention. If the Rossoneri win they’ll silence a lot of doubters, who think that their performances this season have been a fluke, on the flip-side if Juventus win they can hinder AC Milan’s title charge and even revive their own disappointing season.

📽 The big match awaits: let's relive our first #MilanJuve win of the century, courtesy of a @jksheva7 brace 🤩

AC Milan go into this fixture with a depleted squad with stars like Ibrahimovic, Matteo Gabbia, Ismael Bennacer and Alexis Salemakers out injured, and Sandro Tonali suspended after getting sent off in the game against Benevento. Milan will look to persist with Pioli’s trusted formation the 4-2-3-1, with able replacements in place for the missing players. Milan’s most probable line up  will be- Gianluigi Donnarumma;Diego Dalot, Alessio Romagnoli, Simon Kjaer, Davide Calabria; Franck Kessie,Hakan Calhanoglu; Brahim Diaz,Theo Hernandez, Ante Rebic; Rafael Leao.#

Juventus on the other hand have a fully healthy squad available at their disposal, with no one missing through injuries ,suspension or Covid. Pirlo has tried various formations over  the course of this season experimenting with a back four and a back three. We can see the Old lady line up in 3-4-1-2, with the probable line up consisting of- Wojciech Szczesny; Alex Sandro, Leonardo Bonucci, Mattijs de Ligt, Juan Cuadrado; Rodrigo Bentancur, Weston McKennie, Federico Chiesa; Paulo Dybala, Cristiano Ronaldo, Alvaro Morata.

For Milan, in the absence of Zlatan , Leao has inadvertently become the talisman for this team. He has been in exceptional form scoring 4 goals and assisting a further 3 in just 11 appearances. Frank Kessie in mid-field has dominated oppositions with his powerful running and uncompromising tackling technique, for Milan this season.Theo Hernandez is another player that has shown terrifying form this season putting up exceptional defensive numbers , which complement his consistent attacking output really well. If the Rossoneri want to pull one over the Turin side, they’ll need Leao , Kessie and Hernandez to perform at their peaks.

Juventus on the other hand have a Portugese maestro of their own, the ever reliable Cristiano Ronaldo, who despite contracting Covid earlier this season is still performing  at a very high level. He has only had the constant support of Alvaro Morata, throughout this season who has found his scoring touch again and alongside Ronaldo has scored 4 goals and layed on a further 6 goals for his teammates, in just 11 appearances. One of the most disappointing players in a Juve shirt this season has been Paulo Dybala , who scored in the bianconeri’s last match , would look to perform at his peak just behind the prolific pairing of Ronaldo and Morata, as he can act as a game changer in this game.

The last match between the two ended in favour of Milan, as they destroyed Sarri’s Juve  4-2.This time around though,Juventus would look to end Milan’s unbeaten run and validate their own title credentials, while MIlan would look to thrash Juve again, dismantling any hope of a title this season . For the neutrals it would be a supremely exciting match to watch as both teams would look to dominate the ball and attack in numbers.

We at Foottheball predict a close game with a big scoreline of 3-2 in Milan’s favour, because the uncertainty about the system Pirlo wants to implement at Juventus will act as a major stumbling block for them, especially against this coherent Milan side under Pioli.

This match could signify the end of Juventus’ dominance over Serie A and the resurrection of AC Milan as a giant of European football.