Will Sergio Aguero Be Able To Solve All of Barcelona's Problems? Or Is He Just An Impulsive Signing From The Blaugrana?

It is official at last. Sergio Aguero will be playing for Barcelona for the next two seasons in Spain and Europe. The Argentine joins fellow compatriot Lionel Messi at Camp Nou after spending a decade playing for Manchester City in the Premier League where he became the foreign player with the most goals in the English top flight.

The signing of the former Atletico Madrid player seems like an upgrade on the likes of Antoine Griezmann and Ousmane Dembele who have performed below expectations for the Catalans in the past few seasons.

But does Aguero’s signing address all the problems that have been plaguing the Azulgrana recently? FootTheBall takes a look at what the Argentine’s signing implies for Barcelona and the future of the Camp Nou outfit

Kun Aguero will join the Catalan giants from next season in Spain. This is not the first time Aguero is plying his trade in the Spanish top flight. He has played for Atletico Madrid in the past in La Liga before joining English side Manchester City in the summer of 2011.

With Aguero, Barcelona can be sure of a lot of goals flowing in once he settles in with national teammate Lionel Messi in Catalonia. But that is being taken as a given by everyone. Aguero and Messi may enjoy a great relation off-field but their on-field link may not be as strong as everyone is expecting.

Their inability to lead Argentina to a major trophy is well-documented and that in-part can be attributed to slightly conflicting playing styles. Messi flourishes with runners around him, the biggest case in point being Jordi Alba. Aguero, especially at 33, does not fit that bill. He has transformed his game to continue being a major goal threat but in the process, has certainly become more static.

Moreover, the Catalan giants need reinforcements in defence after a horrendous season where they conceded 38 goals in the league – the same number that fifth placed Real Sociedad conceded.

Among the top four sides in La Liga this past season, Barcelona had the worst defensive record and were fittingly made to pay for it as they let the league title slip from their grasp due to defensive errors and frailties.

Aguero’s signing will make this side akin to La Albiceleste to some extent. The Argentine national team has some of the world’s best attacking talent amongst its ranks but its defence is its Achilles heel due to which the Argentine contingent has always come up short in international tournaments

IN NEED OF VAN DIJK-ESQUE PRESENCE

The Blaugrana should be prioritising the signing of an established defender to feature for the Catalans in the heart of defence. The Spanish club should take a leaf out of Liverpool’s book. 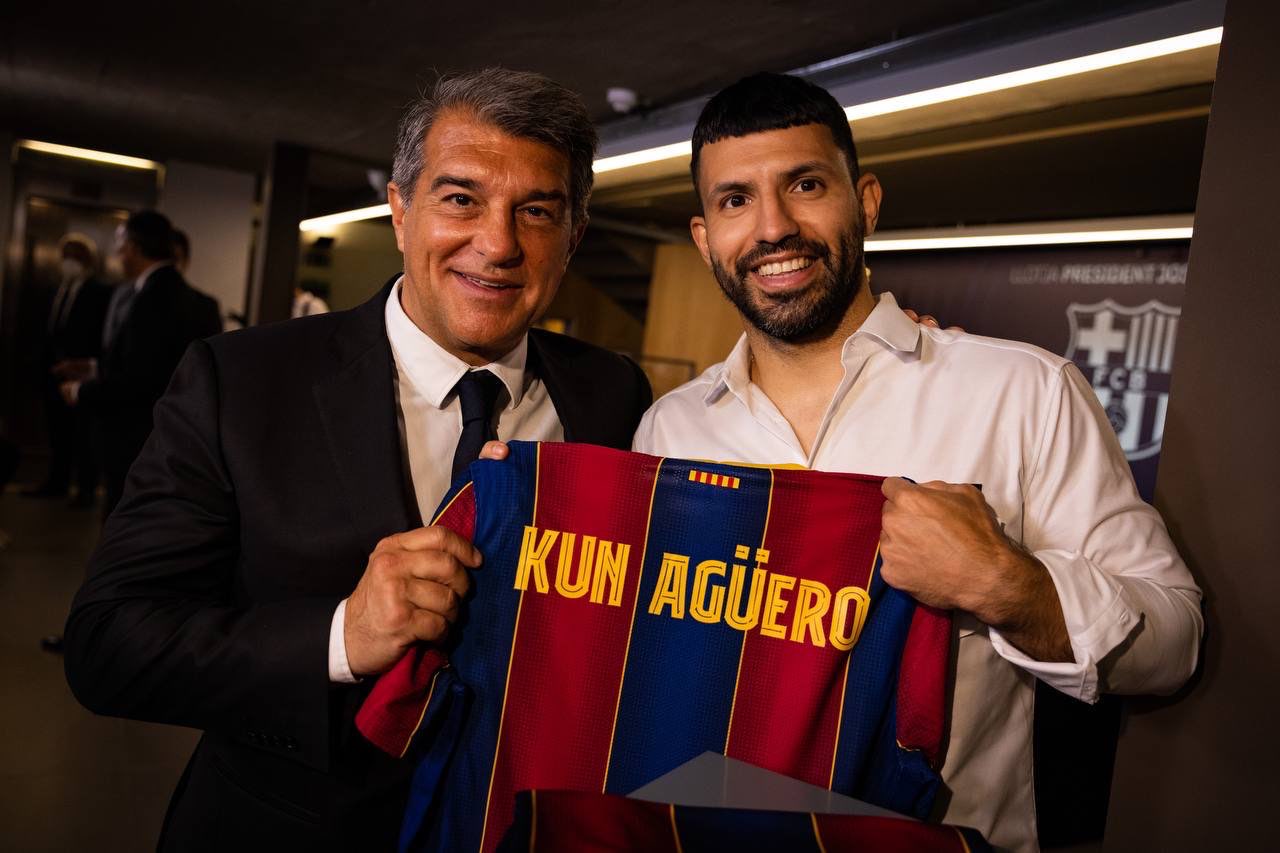 Aguero (right) will bring an edge to Barcelona’s attack, but the Catalans need to strengthen their defence (Image courtesy – Twitter/ Joan Laporta)

Barcelona need a similar saviour if they hope of challenging on all fronts next season. Aguero’s signing is good for PR, popularity and gaining traction on social media, but once the season begins it will be crucial to make the defence watertight.

With regards to this, the Catalan side have acquired the services of Spaniard Eric Garcia. The former La Masia player had gone to Manchester to play for the Sky Blues after not being able to break into the first team at Barcelona.

Three years later he has returned to Camp Nou where he will be reunited with his teammate in the Barcelona youth teams, Ansu Fati.

ERIC GARCIA’S SIGNING – A WISE MOVE OR A PANIC BUY?

Garcia has also been selected by Luis Enrique for the upcoming Euros ahead of the likes of Spanish captain Sergio Ramos and right-back Dani Carvajal, but it is still doubtful if he will get to start ahead of Aymeric Laporte and Pau Torres for La Roja

Barcelona’s attempts to sign a fringe player in defence highlight the club’s transfer policy that has definitely gone awry in the past few seasons. The club is heavily in debt, mulling over returning Coutinho to Liverpool to avoid paying the Reds for his services and are just panicking in the transfer market.

In the midst of all this, Aguero will surely be scoring a ton of goals for the Blaugrana given his sheer quality and his chemistry with Messi, but he is definitely not the answer Barcelona are looking for.

His signing will only temporarily allay fears at Camp Nou, before their lack of quality in defence is exposed once again as the season goes on