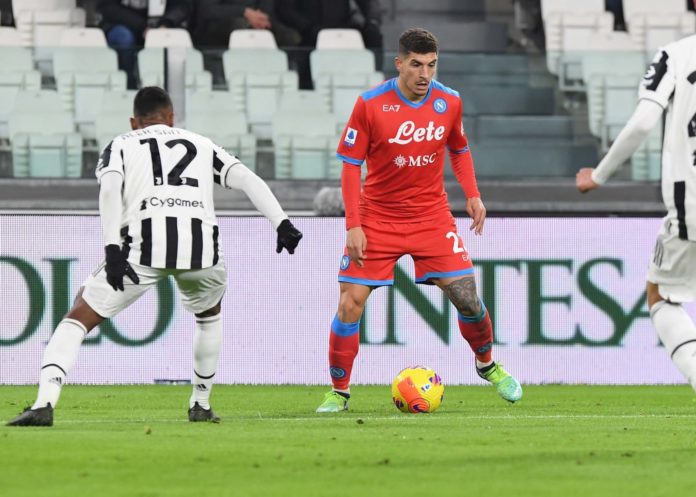 Juventus and Napoli played out an entertaining 1-1 draw with Federico Chiesa’s strike cancelling out Dries Mertens’ first half opener in Turin on Thursday night.

Juventus started the match on the front foot with Chiesa looking particularly bright. His shot deflected behind for a corner in the fourth minute let to a great chance for Weston McKennie who put a free-header wide from close range.

Manue Locatelli pulled the strings from midfield while Chiesa dropped into space to drive at Napoli’s defence. There were a lot of shooting opportunities for Massimiliano Allegri’s side with Adrien Rabiot shooting wide, and Chiesa testing Ospina before the quarter hour mark.

Napoli absorbed the pressure and responded in kind with Lorenzo Insigne having two sighters from distance. And it was the away side that got the breakthrough thanks to some patient buildup.

Insigne drifted inside with the ball and clipped a pass in to Matteo Politano who held it up well before laying it off to Dries Mertens inside the box. The Belgian dummied and slammed a great shot past Wojciech Szczesny and Mathijs de Ligt on the line for his eighth goal of the season in just 14 appearances.

Juve responded and started to dominate possession more as Napoli dropped to play on the counter attack. Juan Cuadrado fizzed a shot just wide while Chiesa continued to be a threat. Alvaro Morata had some nice moments in link-up but they were unable to put the pressure on Ospina’s goal.

It was Napoli who had the last chance of the half as they broke away following a corner and Diego Demme was brought down at the edge of the box by Alex Sandro. Things were getting heated and not just amongst opponents as Cuadrado and Chiesa appeared to argue over the latter losing possession. Mertens’ resulting free-kick was just wide and the teams went in to half time with just the one goal to separate them.

The second half began on a quieter note but the goal came soon for Juventus as they continued to put the pressure on. McKennie made a great run to stretch the Napoli defence and his cross from the right side was only half cleared. The ball fell to Juve’s messr-in-chief, Federico Chiesa, whose shot deflected into the far corner with Ospina helpless.

Juve nearly got the lead in the next minute as the ball pinballed in the Napoli box but it was cleared away by Spalletti’s men. The game remained end to end after that but chances came at a premium.

Allegri threw on Paulo Dybala who drew a good save from Ospina from a long range shot. The match was played in transition for the rest of the time with neither side able to impose themselves.

Substitute Moise Kean got the best chance towards the end from Cuadrado’s cross in injury time. However, his header looped over the bar and the match ended on level terms, deservedly. Here are our talking points from the game –

Juventus have an exceptional midfield lineup. They’ve got Locatelli who can pull the strings from deep and connect attack and defence. They have McKennie who is exceptional at creating space for himself and others. And they have Rabiot and Bentancur who can do a bit of everything.

They also have good wide players in Chiesa and Bernardeschi but their main concern continues to be a lack of goals. Morata was good, and has been most of the season, but he has never scored more than 15 goals in a season in his career. To expect him to do so now would not make sense.

The Old Lady needs a striker. They have the setup to service him but 28 goals in 20 games for the whole side is nowhere near good enough.

Last few weeks there has been a lot of talk about Lorenzo Insigne’s impending departure at the end of the season. He is expected to move to Toronto FC for a deal expected to be worth 80 million Euros over five years.

Lorenzo Insigne has signed his five year and half contract as new Toronto FC player. Deal sealed and completed in Rome together with his agent. It’s done, no way back. 🔴🇨🇦 #TorontoFC

Official statement expected soon. Lorenzo will arrive in Toronto in July with his family. #MLS pic.twitter.com/36HGWZm8OJ

He has been at Napoli his entire career and he showed against Juve why he is so valued in Italy and why Toronto want to pay the big bucks. He was the focal point of most Napoli attacks, dropping into space when needed and holding the width to mix it up. There is no doubt that he remains one of the best players in the league and if he is leaving then Napoli would want to send him off on a high.

The match was a great watch with end to end action. Juventus had 22 shots on goal while Napoli had 16 attempts. The away side were more efficient though – creating 15 chances to Juve’s 11.

The draw seemed like a fair result – Juventus were the more adventurous while Napoli were the better drilled side. It does mean though that Napoli can lose further ground to Inter and now will be focusing on securing Champions League football while Juve run the risk of being leapfrogged by Fiorentina who have a game in hand.