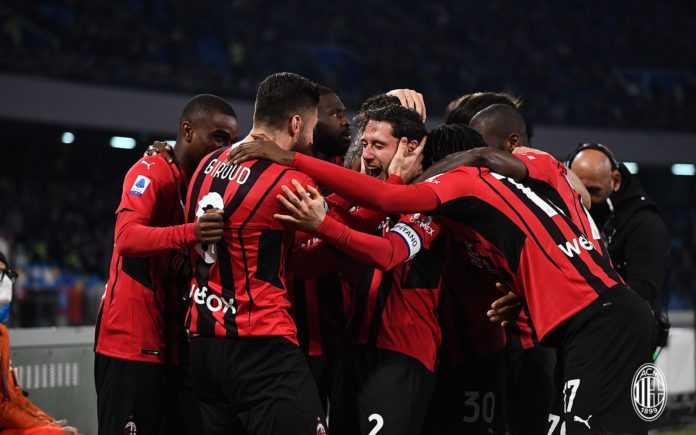 Stefano Pioli’s AC Milan secured a key win in the race for the Serie A title with Olivier Giroud’s solitary goal in the second half being enough to overcome second-placed Napoli.

An important victory from a hotly contested match ✌️

Milan began the game tentatively, allowing Napoli to take control of the opening exchanges.  The home side put the ball in some uncomfortable positions, attacking through the channels, looking to use Osimhen’s physicality.

Spalletti’s men had an early scare though with Kalidou Koulibaly seemingly tripping up Ismael Bennacer after an aerial one-two with Olivier Giroud. The contact was minimal and the referee waved play on to Napoli’s relief.

David Ospina was called into action in the 19th minute, making an incredible save from Pierre Kalulu’s header from a corner. The save though was rather academic with the whistle having already been blown for a push in the melee.

Milan grew into the game with Rafael Leao bringing out his box of tricks. The winger was a persistent threat with his dribbling and creativity but was unable to make the telling contribution in the final third. The game got a bit patchy with injuries to Osimhen and Olivier Giroud causing long interruptions.

Good chances were few and far between in the first 45 but the match still had a good momentum to it. Both sides were looking to avoid defeat first and their respective aims of having a clean sheet at half-time were achieved.

The second half offered more end-to-end action and it didn’t take long for the deadlock to be broken. Sandro Tonali whipped in a free-kick that Napoli failed to clear. The ball fell to Davide Calabria whose drilled shot was guided in by Olivier Giroud.

Napoli sparked into action after going behind with Osimhen calling Mike Maignan into action soon after. The game opened up with Bennacer’s attempt being tipped around the post by Ospina at the other end.

The home side struggled to break down Milan with Fikayo Tomori and Kalulu putting in a good shift in defence. Osimhen though continued to be a threat, testing Maignan late on with a sharp shot at the neat post. Milan arguably had the better chances to put the game to bed but Alexis Saalemaekers and Theo Hernandez were profligate.

In the end, Pioli’s side held on for three big points that propelled them back to the top of the table. Here are our key takeaways from the match –

At times, the match felt like an individual battle between Rafael Leao and Victor Osimhen as the two individuals looked to propel their sides to the win. Osimhen troubled the Milan backline throughout with his exceptional hold up play and continuously tested Maignan.

Leao toyed with the Napoli defenders, beating two men at once with ease on multiple occasions. The two attackers put on a scintillating show in the Diego Maradona stadium with performances that the Argentine himself would be proud of.

Milan had the most leaky defence amongst the top four going into the match but Fikayo Tomori and Pierre Kalulu were hugely impressive. The Milan defence did not allow any clear-cut opportunity, effectively shutting down an in-form Napoli attack.

After an initial adjustment period, the side settle in quickly. They held their shape well, pressed with intensity and were always focused, a true Catenaccio-esque performance.

Still All to Play

The result meant that AC Milan reclaimed top spot in the Serie A, overtaking opponents Napoli and rivals Inter Milan in the process. Inter are two points behind but have a game in hand while Juventus are still not out of the picture with a 7 point gap to the top.

Napoli suffered the defeat on the night but there are still ten matches to go in the season. A three point deficit can easily be overturned in the period and this race is going to go down to the wire.