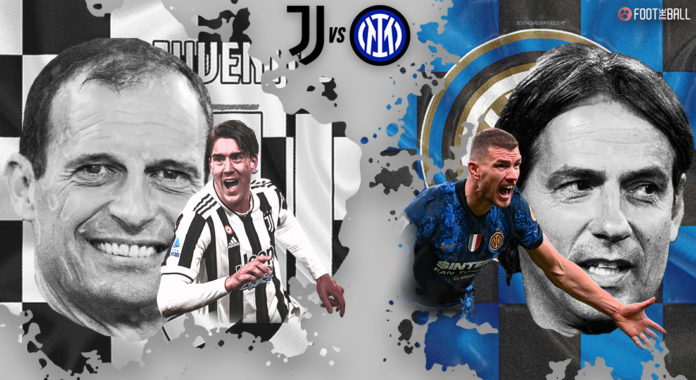 After a disappointing international break for the national team, football returns to Italy with fans eager to forget their World Cup qualification heartbreak and ready to get back to the enthralling Serie A title race. They will be treated to a blockbuster fixture as defending champions Inter Milan travel to Juventus on Sunday night.

A win for Massimiliano Allegri’s side could see them overtake Inter for the first time this season with just one point separating the two sides in third and fourth. Juventus are unbeaten in their last 16 matches in the Italian league, a run which has seen them re-enter the title picture after a disappointing opening couple of months.

Inter meanwhile are headed in the opposite direction on the form direction, having only won once in their last seven matches. This has seen them drop to third although they still have a game in hand which could prove crucial.

Juventus and Inter were knocked out of the Champions League by Villarreal and Liverpool respectively in March, which adds more emphasis on their need to do well domestically. The reverse fixture at San Siro in October was a tight 1-1 draw while Inter won the SuperCoppa Italia final 2-1 in extra time earlier this year.

Allegri will be happy with the mostly positive injury news he has received recently. Dusan Vlahovic is fully fit and available for selection while Alex Sandro and Juan Cuadrado should also make the cut after a few weeks out. January signing Denis Zakaria returned to training but is still a doubt for the weekend.

Luca Pellegrini is suspended while Weston McKennie, Federico Chiesa & youngster Kaio Jorge are ruled out for the season with long-term injuries.

Inter boss Simone Inzaghi should have a full strength squad to choose from in Turin on Sunday. Stefan de Vrij and Marcelo Brozovic trained separately during the week but are expected to rejoin the team ahead of the key tie while Lautaro Martinez has recovered from Covid-19 and is available.

Juventus have relied upon their star man Dusan Vlahovic for the goals but their most important attacking threat has arguably been Paulo Dybala. The Argentine is unlikely to extend his contract with the club beyond the summer and will be hoping to go out on a high by powering a title charge.

Where will he be next szn? 👀🇦🇷 pic.twitter.com/DS23YdHnci

Dybala has 13 goals and 6 assists in 29 appearances this season but his contributions go far beyond just direct contribution. His movement with and without the ball will be key in creating spaces against the second best defence in the league this season.

Italy have a host of exciting midfielders amongst their ranks like Locatelli, Tonali and Pessina but arguably the pick of the lot is 25-year old Nicolo Barella. Inter will be relying on Barella to pull the strings and take control of the game, as he has done regularly over the past couple of years.

With Brozovic lying deeper and Calhanoglu taking up space in more advanced areas, it will be up to Barella to connect defence and attack. He can carry the ball well and has a decent passing range but he will still need to be at his best to outrun the Juve midfield.

With just seven points separating the top four in the Serie A, the pressure on each side is very high. Juventus could make a statement return with a win or fall back into the top four fight with a defeat. Inter showed maturity last season when it mattered but this campaign has not been as smooth. One can expect a tight cagey fixture and FootTheBall predicts the two sides will cancel each other out, Juventus 2-2 Inter Milan.