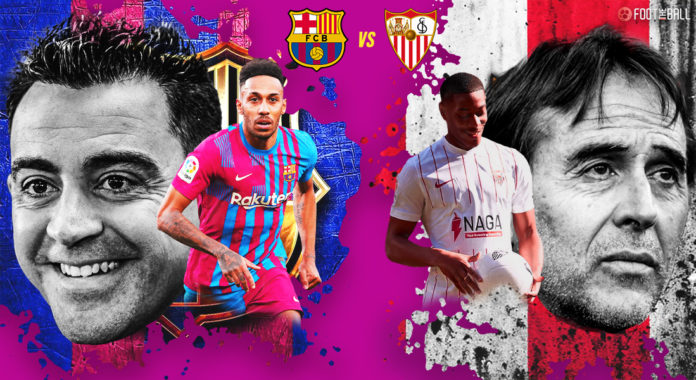 Two teams are separated by three points, one game, and one position on the league table. Barcelona have been on the rise ever since the arrival of Xavi with Sevilla punching well above their weight.

Xavi has orchestrated a monstrous turnaround, capped off by the huge win over Real Madrid before the international break. In fact, the Blaugrana have won nine of their last 12 games across all competitions. They have scored 32 times while conceding only 10 during that period.

The January signings have settled in right from the off, all three becoming key first-team players. Barcelona are certainly on the up and are gunning to get as close to Los Blancos as possible. All of this is a far cry from where the team was when Xavi took over last year. With Atletico Madrid faltering, the Catalans have cemented their position as the second-best team in La Liga in recent times.

The actual runners-up currently are sitting nine points behind Real Madrid after a marvellous season so far. Sevilla have shocked many by constantly keeping hold of the second spot. However, they have been shaky of late which has allowed the rest of the chasing pack to catch up.

Three draws in their last three league matches, with elimination from the Europa League thrown in the mix, have downed the spirits. Julien Lopetegui knows that he cannot afford to have any more slips from now on. There is a strong chance of achieving something really special, even if they do not win the title and Sevilla will aim to remain second.

This game will be crucial as Barcelona have a game in hand for later so increasing the gap is paramount.

Sergi Roberto and Sergino Dest remain injured. Nico Gonzalez has contracted covid and is ruled out. Ansu Fati has returned to group training.

Sevilla have a lot more absentees to deal with which has derailed their form of late. Marcos Acuna, Karim Rekik, Fernando and Alejandro Gomez will all miss the trip.

Pierre-Emerick Aubameyang has already been a hit after an acrimonious departure from Arsenal. Seven goals and one assist from seven matches, including a record-setting El Clasico performance. Aubameyang is a supreme facilitator of attacks so it is no surprise that Xavi has given him free roam.

The Gabonese starts either on the left flank or through the middle before switching among these places for the rest of the match. This is particularly important against Sevilla. If Aubameyang is on the right, Jesus Navas has to be very wary. The Spaniard is not as fast as he used to be so he will know letting Aubameyang run is not wise.

If Aubameyang plays as the central striker, he will target Nemanja Gudelj who is filling in as centre-back. There are a lot of avenues to hurt and Aubameyang will be keen.

The scoring burden is always there on Lucas Ocampos. The Argentine wide attacker has five goals and two assists this season. Though the numbers are not too impressive, Ocampos has been ever-present. It is because of his attacking nature and willingness to run with the ball.

The lads had their shooting boots on today! 🚀 pic.twitter.com/Zg2pedbFb5

Ocampos will worry the legs of Gerard Pique and Dani Alves on that side. He can get by the touchline time and again to deliver crosses. Sevilla will need to support their crosses with bodies in the penalty box so the chance to shoot increases.

Ocampos can also move alongside Anthony Martial in attack to form a two-headed attack. That can put more pressure on the backline and give Sevilla momentum.

Barcelona enter the contest as favourites given their recent form and home status. However, Sevilla have been strong this season and can see an overturn in fortunes. FootTheBall predicts a 2-0 win for the Catalans.