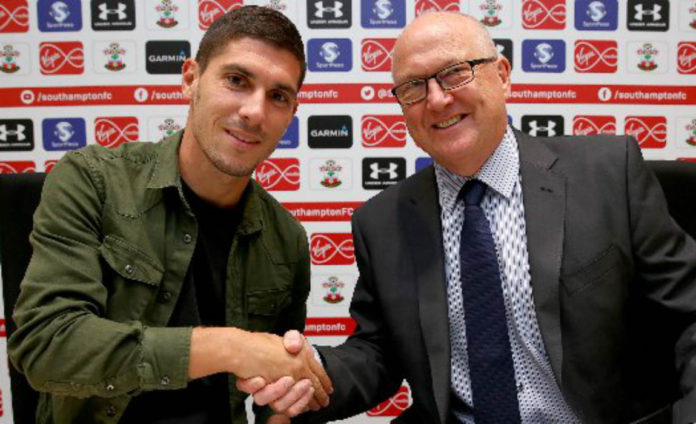 Premier League club Southampton have officially revealed the signing of talented French right-back Jérémy Pied as a free agent, on a two-year contract. Southampton has been busy this summer and it is believed that the 27-year-old defender is the right man to increase the depth in the back-line.

The move to Southampton will reunite Pied with the new Saints manager Claude Puel for the third time in his footballing career. The French defender previously played under Puel, during his time at Lyon and Nice.

In an official statement, Pied said: “I am very happy to be able to join this new team. I’m very proud. The English league is a very attractive one and it was a goal of mine to be able to play in it. I’m now very happy to join Southampton. You only have to look at the facilities and their results over the last few seasons to know that this is a very good Premier League club.”

“I am someone who likes to give everything out on the pitch and leaves nothing out there,” Pied told

“I will give lots of energy, speed and hopefully try to be a bright spark during the matches.

“I used to be an attacking player who moved back, so I hope to bring that attacking flair to our matches,” he concluded.

Executive Director of Football Les Reed stated: “The signing of Jérémy confirms the commitment of Southampton to succeed again in the Premier League and Europa League, as well as go for a run in the cup competitions.”

“We already have a top quality right-back in Cédric, whose achievements with Portugal in the summer were outstanding. While Jérémy will provide excellent competition, he is also a versatile defender and again will be pushing Cédric, Cuco [Martina] and the other current defensive incumbents hard.

“The squad is training very well and there is real competition all-round, which is only right for an ambitious team. They will all be called upon this year to contribute to our pursuit for success, and Jérémy will only add to that. I hope everyone will join me in welcoming Jérémy to the south coast as we look forward to another fantastic season.”