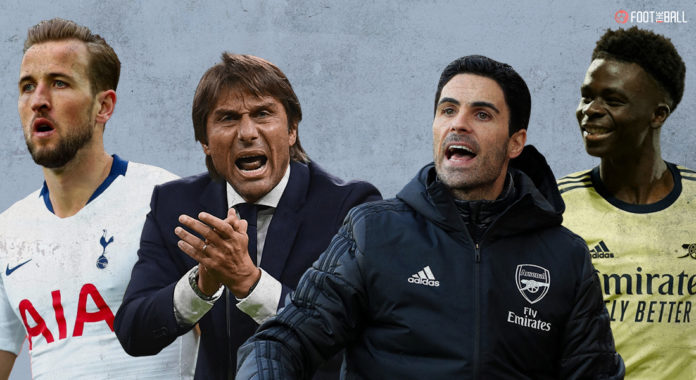 It’s the most awaited matchday in North London. One of the hottest derbies in the PL writes another Chapter on Jan.16 when Arsenal travel to the Tottenham Hotspur stadium to play their North London rivals.

While the emotions in this one always run high, there are added stakes this time, with both clubs closely contesting the race for a Champions League spot. Currently, Arsenal sit fifth, just two behind West Ham, but having played a game less. Tottenham are sixth, a further two points behind Arsenal. However, Spurs hold their destiny in their own hands as they have played two fewer games than Arsenal.

Their third consecutive win sees them leapfrog Arsenal into the top four#WHUNOR pic.twitter.com/5x11nD6Igy

Both teams come into the game with their resurgence having stuttered somewhat. Spurs have been dumped out of the League cup without much fuss by Chelsea, while Arsenal have endured a calamitous few days with their FA Cup elimination against Nottingham Forest.

Spurs are unbeaten in the PL since Conte took charge, while Arteta’s Arsenal gave a good account of themselves in their home loss to Manchester City in their last PL game.

For Tottenham, their injury worries are less on paper but the situation with Conte is a bit more complex. While only star forward Son Heun-Min and Cristian Romero join Steven Bergwijn on the sidelines, Conte has been unhappy with the effort of a few players, sidelining them. Players like Ndomble are unlikely to play any part, while others like Lo Celso have fallen out of favour.

Tottenham blow as Son Heung-min ruled out until February https://t.co/kccrdPCoJb

Absences are piling up for the red side of North London. Crucial midfielder Thomas Partey and backup forward Nicolas Pepe are busy representing Ghana and Ivory Coast respectively. They are joined by Gabonese Aubameyand and Egyptian Elneny.

The major absentee will be Martin Odegaard, who has tested positive for COVID. It will be touch-and-go for Emile Smith-Rowe and Takehiro Tomiyasu, both of whom are suffering from muscle injuries that ruled them out of Arsenal’s Carabao Cup semi-final against Liverpool.

With Arsenal running out of midfielders to put on the pitch, Spurs will look to cut through the middle and take advantage of a frail centre. While Lucas starts games out wide, his tendency to take on players through the middle could leave Arsenal exposed. Albert Sambi-Lokonga will have a key role to play as the only fit senior central midfielder in the squad.

While Harry Kane is always a threat, even more so against Arsenal, look for Lucas giving the defenders a torrid time with his direct running and wavy dribbling. Arsenal’s midfield and defence could be in for a nightmare if the supply lines to Harry Kane are not cut off at the source.

Arsenal, in the absence of midfielders, could look to a switch of formation to accommodate more defenders and play Ben White as a makeshift defensive midfielder alongside Lokonga. In such a case, the industrious running down the flanks of Kieran Tierney, and his battle with Lucas could go a long way to deciding the game.

Ben White will probably get all the plaudits but Tierney was immense tonight pic.twitter.com/A52BGAuao1

If the Scottish left-back can contribute going forward as a wing-back while doing his defensive duties diligently, then Arsenal can hope to take something from this one.

It’s a shame for the PL as a spectacle that such an exciting game has the potential to be below-par due to the injury problems faced by Arsenal. Arteta would look to make it a cagey affair with few chances and hope for a goal at the other end. Tottenham should be favourites for this one unless Arsenal manage to replicate their huge defensive effort against Liverpool in the Carabao Cup just 2 days before this fixture. FootTheBall predicts Spurs 2-0 Arsenal