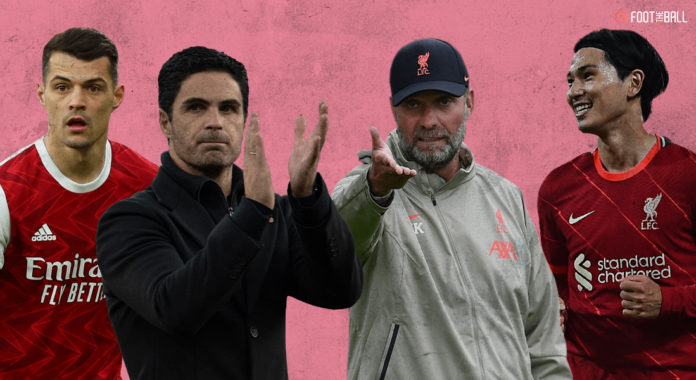 10-man Arsenal held Liverpool to a 0-0 draw in the first leg of the Carabao Cup semifinal on Thursday night as Granit Xhaka was sent off early in the first half.

A hard-fought draw at Anfield.

Onto the second leg – 𝘁𝗼𝗴𝗲𝘁𝗵𝗲𝗿! ✊

Under an electric Anfield atmosphere, the match got off to a fiesty start with both sides looking to get on the front foot. Liverpool’s high press caused Arsenal problems with Aaron Ramsdale not having the best of starts with his distribution.

Arsenal responded with some pressure of their own with Alexandre Lacazette looking to catch Alisson out of position with a long range sighter. The game settled into a nice ebb and flow with little clear cut chances.

That changes halfway through the first half as Andy Robertson played in Diogo Jota with a good ball over the top. Granit Xhaka tracking back went in high to get the ball but could only bring down Jota and was sent off being the last man.

Our second change of the evening…

Liverpool started to dominate the ball with Robertson and his counterpart, Alexander-Arnold seeing more and more off the ball. Arteta threw on Rob Holding to make it a five man backline that was tough to break down for the Reds.

The Gunners defended well and looked to counter through Bukayo Saka as an outlet. The first half ended goalless and was devoid of goal mouth action but entertaining nonetheless.

Heading into the break level, with the visitors having been reduced to ten men. #LIVARS pic.twitter.com/sSh6Io1P7e

The second half began the same way the first ended with the Arsenal defence blunting the Liverpool attack. By the hour mark, neither side had a shot on target.

The Reds were feeling the absence of their main men Mo Salah and Sadio Mane, who are both on international duty at the African Cup of Nations. Takumi Minamino was Liverpool’s brightest player, which isn’t saying much. He linked well with the rest of the attacking line, and made clever runs.

The golden chance fell to Minamino in the 90th minute when a loose ball fell to the attacker in the box with Ramsdale out of position. The Japanese international though could not control his shot on the half volley and fired over with the goal gaping.

90' – Big chance! Oxlade-Chamberlain's cross causes a mix up between Ramsdale and two defenders. It falls to Minamino but he can't get over the ball.

Neco Williams fired in a dangerous ball in injury time but Ben White was in the right place to clear it away from the goal line to ensure that the sides went into the second leg on equal footing. Here are our key takeaways from the match –

Granit Xhaka’s red card was his fifth in all competitions since making his Arsenal debut, more than any other played in the league. His straight dismissal meant that he will miss the North London derby against Spurs at the weekend and the reverse leg at the Emirates.

5 – Since his debut season with Arsenal in 2016-17, no Premier League player has been sent off more times in all competitions than Granit Xhaka (5). Orders. pic.twitter.com/MLVP5gaGVH

Despite his chaotic nature, Xhaka remains one of the most important players for Arteta and he will be a big miss in these big games. He is one of the few senior players in the team and can control the midfield. The red card caused more problems to Arsenal than just on the night.

Arsenal under Arteta have been plagued with inconsistency and the same has continued this season. Under difficult circumstances, the team showed great signs of maturity and Arteta too tempered his side’s attacking tendencies well.

There have been great signs of improvement this season and this is another stepping stone for the youngest side in the Premier League.

For Jurgen Klopp, the next month looks gloomy. In a congested and difficult run of fixtures he will be without his two primary goal scorers. The absence of Mo Salah and Sadio Mane has the potential to make the difference between a successful season for Liverpool or a trophy-less one.